Rainfall Totals for California '400% to 600% Above Average Values'

Updates: Willow Avenue is closed between Friant Road and Copper Avenue for emergency road repairs, the city of Fresno said. The road is expected to reopen to traffic by 4 p.m. Tuesday.

The Choinumni Park day use and campgrounds are closed until further notice due to storm-related issues and cleanup, the Fresno County Public Works Department announced Tuesday afternoon.

The steady onslaught of moisture-laden storms out of the Pacific has produced 400% to 600% of the average rainfall in recent weeks across California, the National Weather Service reported Tuesday morning.

The deadly storms, which have already claimed more than a dozen lives statewide, claimed two more Tuesday morning. ABC30 reported that two motorists died on Highway 99 in Visalia when a eucalyptus tree fell across the northbound lanes.

The heavy rains have led to Fresno, Madera, and Merced counties to declare states of emergency because of high water, flooded and damaged roadways, and evacuation orders for residents in low-lying areas.

On Tuesday morning Fresno County called off an evacuation order issued for residents living in the area of Highway 180 and Piedra Road in Sanger as heavy flows in Mill and Hughes creeks, which feed into the Kings River, eased up.

But road closures remain in effect, including the area of Tollhouse Road and Pittman Hill Road near Humphreys Station, where flooding is occurring across the nearby bridge.

Fresno County Fire’s swift water rescue team has been activated & propositioned here in the Fresno area by Cal OES. We are urging all residents to keep informed on incoming weather and evacuation warnings & orders. https://t.co/EdsH9BHvyU

Meanwhile, local fire department units have been prepositioned by the OES to assist at sites across California. The Fresno City Fire Department swift water rescue team is in Ukiah in Northern California.

Merced is facing a flood emergency as waters rise on Bear Creek and the Merced River. The city issued evacuation orders for residents in the Bear Creek area. An evacuation center is open at the Merced County Fairgrounds at 900 Martin Luther King Jr. Way.

Caltrans reports that Highway 140 is closed in two locations: from Tina Drive to Baker Drive in Fresno due to flooding and from east of Midpines to west of Incline in Mariposa County due to mudslides.

More Rain on the Way

Valley residents may enjoy a brief respite Tuesday morning from the heavy downpours that soaked much of the state on Monday but should be prepared for the next severe storm to arrive later in the day.

The storms raise the potential for more mud- and rockslides, especially in areas where wildfires have burned recently, and road flooding.

The storm is forecast to end by early morning Wednesday. However, more storms are lining up in the Pacific, with the next one aiming toward Northern California and the Pacific Northwest and arriving later Wednesday, followed by other storms heading this way.

“An enormous cyclone forming well off the coast of the North American continent will bring yet another Atmospheric River toward the West Coast — this time impacting areas further north from Northern California northward up the coast of the Pacific Northwest on Wednesday,” the National Weather Service said in a short-range forecast. “When all is said and done, precipitation totals over the next few days will be in the 3-7 inch range through the Transverse Range of southern California, northward along the central to northern California coast ranges and through the Sierra.” 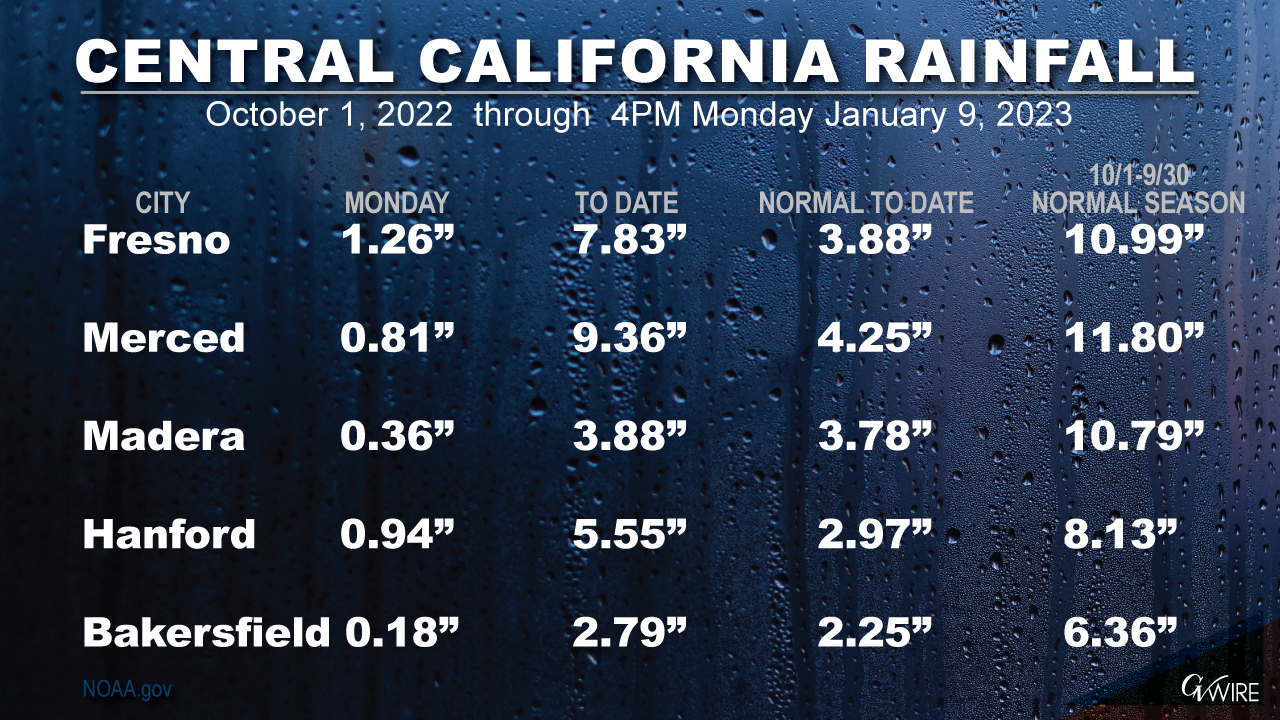 Pacific Gas and Electric spokesman Denny Boyles said Tuesday morning that 189,000 PG&E customers were without power. He said that 4,044 of them were in the Fresno area.

The Fresno County Department of Public Works is addressing storm-related hazards, including road closures and flooding, even as staffers try to keep road yards supplied with sand and sandbags.

At the only road yard in the city of Fresno on M Avenue north of Shepherd Avenue, county staffers have been trucking in sand from other road yards to meet the demand for sand from Fresno and Clovis residents, spokeswoman Sonja Dosti said Tuesday.

“It runs out quickly, so they’re constantly having to replenish from other yards,” she said. “That one seems to be the one most visited.”

Newsom Spells Out Cuts as Budget Goes From Surplus to $22.5B Deficit