Fresno Unified Superintendent Bob Nelson says that district officials now hear about students being injured in pedestrian accidents “almost every day,” and he says it seems as if the number of incidents have doubled compared to a year ago.

“Safe routes to school have never been a bigger issue for us.” — Fresno Unified Superintendent Bob Nelson

Those incidents include the death in early October of Hoover High student Rashad Al-Hakim Jr. and the injury on Monday of a McLane High School student near their schools.

In addition, Nelson said, a Fresno Unified kindergartner was seriously injured at Ashlan and West avenues Wednesday evening. That accident was not school-related, but the student “is one of ours.”

Complicating an already dangerous situation: Jaywalking will become legal in California on Jan. 1. 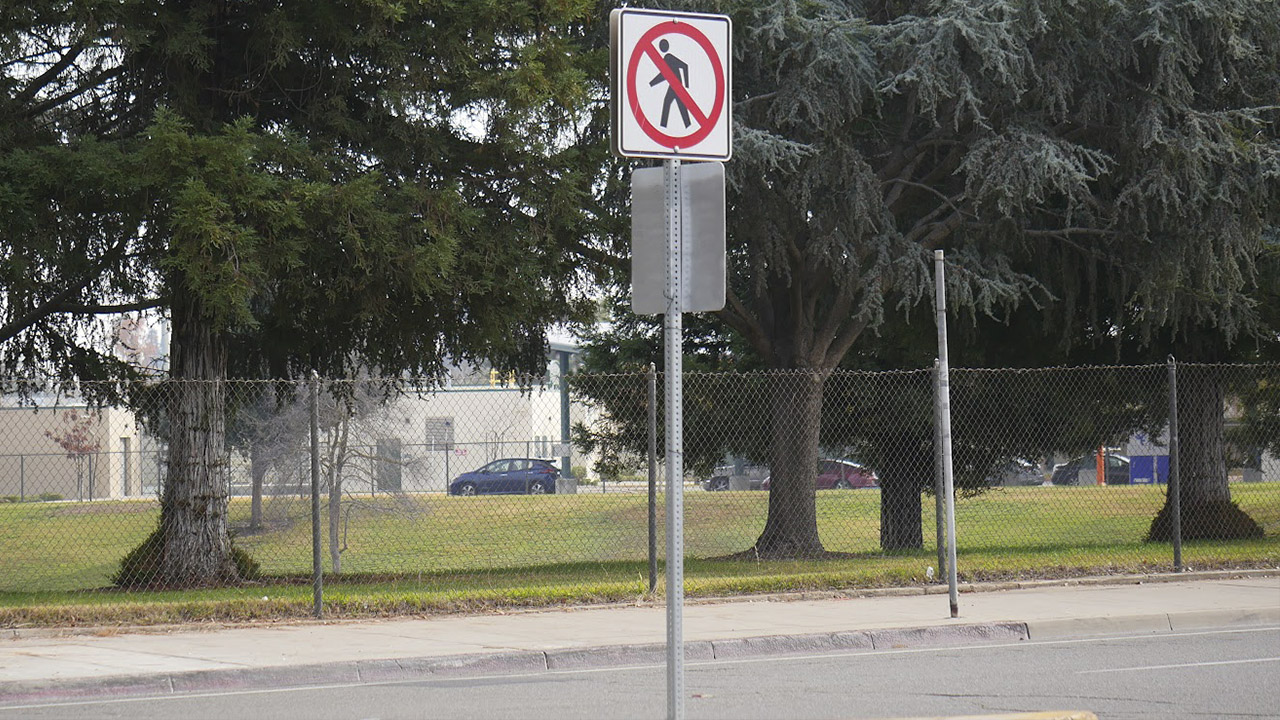 A no-crossing sign is on a median on First Street near Hoover High School. (GV Wire/Jahz Tello)

School district officials are scheduled to meet in early January with Fresno city officials to discuss how to improve student safety, Nelson said.

Safety measures at Hoover could include adding a fence to the median on Fresno Street to discourage Hoover students from trying to cross First Avenue in mid-block, to adding safety monitors at key points in the city, he said.

“Safe routes to school have never been a bigger issue for us,” he said.

Will pedestrian safety be a bigger issue after Jan. 1, when a new state law takes effect that decriminalizes jaywalking? Nelson said he doesn’t think it will encourage students to jaywalk more than they already do, “but it doesn’t help, I’ll give you that.”

Assemblymember Phil Ting, D-San Francisco, who authored AB 2147, “The Freedom To Walk Act,” said enforcement of jaywalking laws has been arbitrary and typically targets people of color and those in low-income neighborhoods who can ill afford an expensive traffic citation.

“It should not be a criminal offense to safely cross the street. When expensive tickets and unnecessary confrontations with police impact only certain communities, it’s time to reconsider how we use our law enforcement resources and whether our jaywalking laws really do protect pedestrians,” Ting said in September after AB 2147 was signed into law by Gov. Gavin Newsom. “Plus, we should be encouraging people to get out of their cars and walk for health and environmental reasons.”

The law does not allow indiscriminate jaywalking, however, and specifies that pedestrians may cross streets outside of crosswalks when it is safe to do so.

The issue of student safety was spotlighted Wednesday evening when Terajee Hakim, Rashad’s aunt, tearfully asked the School Board what the district is doing to make it safer for students going to and from school.

His family has stepped up to volunteer as crossing guards in the Hoover neighborhood, she noted.

“My nephew was murdered in front of his school in the school zones. And I just want to know, what are you guys going to do to protect these students? To protect these kids? What security measures do you guys have in place now?” she asked.

Both Nelson and Hoover Area Trustee Claudia Cazares told Hakim that the district is focusing on student safety in the wake of Rashad’s death. Cazares thanked Hakim and her family for their efforts to personally make sure students are safely crossing streets.

“That’s one of the ideas that I’ve put forth at our elementary schools and then moving them forward to our middle schools and our high schools. So thank you,” she said.

“He wants to make sure we are all doing what we can collaboratively to ensure that student safety is the best it can be,” she said.

There are no proposals on the table at this point, she said, but the mayor is seeking input about what can be done to make students safer, which could include more signs and public service announcements, Rose said.

Fresno police have not launched any task forces or special enforcement actions focusing on student safety at this point, Lt. Bill Dooley said. The number of pedestrian fatalities citywide, including Rashad’s death, is 27 so far this year, compared to 25 in 2017 and 2018, 20 in 2019, 29 in 2020, and 22 last year, he said.