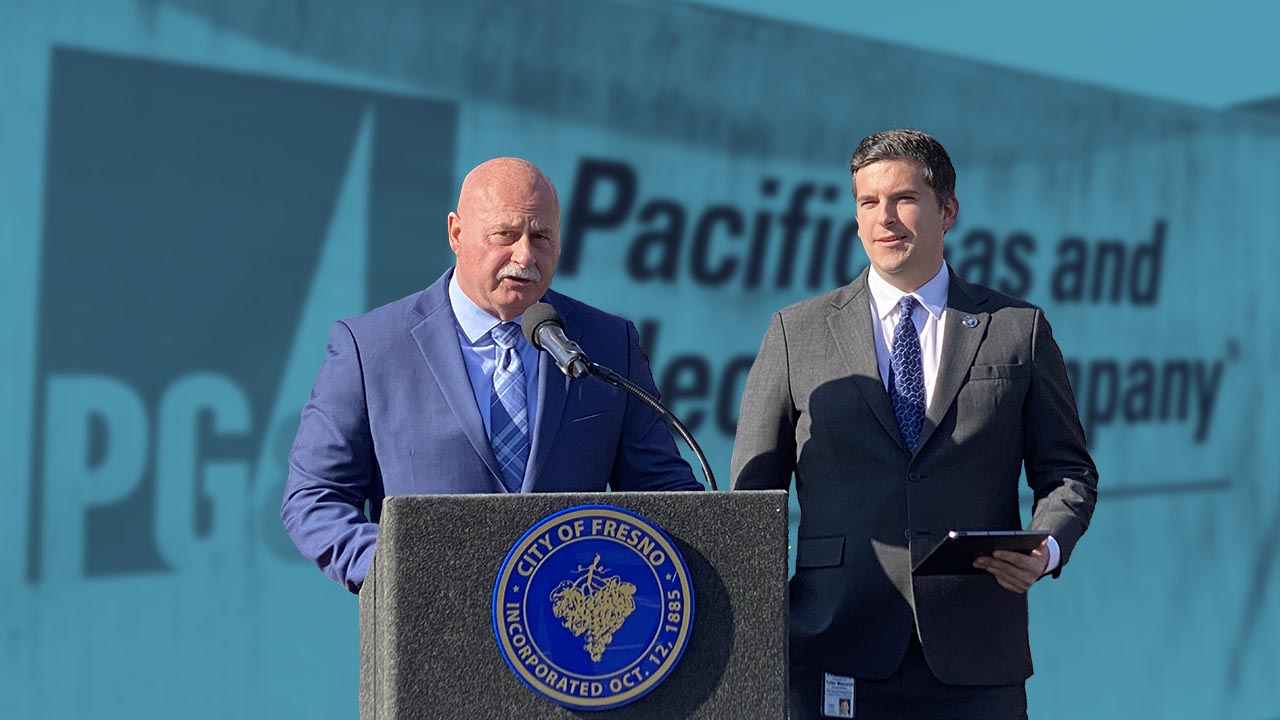 If you thought Fresno City Hall no longer was interested in replacing PG&E as the utility provider for local residents and businesses, guess again.

Two councilmembers, Tyler Maxwell and Garry Bredefeld, who joined Mayor Jerry Dyer last month in leading the charge to investigate securing an alternative to the energy giant, both say the effort continues. The three cited PG&E’s high rates and insufferable delays in supplying power to new developments as reasons to look elsewhere.

And these wheels continue to roll along even though four councilmembers voted to table the PG&E replacement discussion on Nov. 3.

As Maxwell now explains it, council approval isn’t necessary to start the process.

“With our discussions with the administration, we have learned that an RFP (request for proposal) has been put together. Administration does not technically need council’s majority vote to put one of those out, and I believe it is our intention to do so,” Maxwell said.

An RFP is the process to put contracts out publicly to bid.

Maxwell suggested that GV Wire check with the Dyer administration. When asked, Dyer provided no confirmation, and his spokeswoman did not respond to a follow-up inquiry.

And, there are no RFP solicitations on the website used to invite bidders.

However, Bredefeld tells GV Wire the city is pursuing looking at all options.

“We are moving forward just as we stated we would at the council meeting. We will hold PG&E accountable for our constituents and not allow them to continue gouging them with exorbitant rates or create housing moratoriums in our city. This is just the start with more to come once we get all the information we need,” Bredefeld texted.

[Update, 12/01/2022, 4 p.m.: the story has been corrected to reflect that Bredefeld is seeking all options for an energy provider, not necessarily a PG&E “replacement.”] 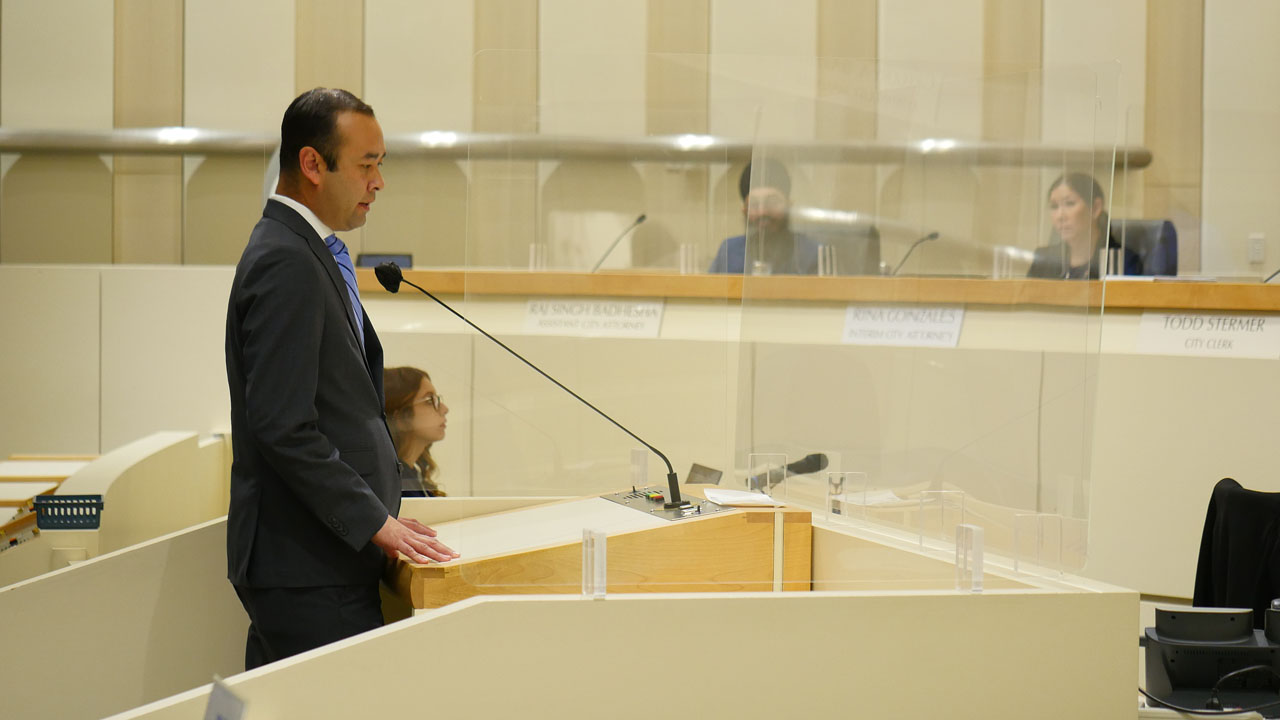 City Attorney-designate Andrew Janz speaks at the podium at City Hall regarding the approval of his contract. (GV Wire/Jahz Tello)

The council unanimously approved the contract for city attorney-designate Andrew Janz, 7-0. He starts next Monday.

An amendment introduced on Thursday added language to the contract that would prevent the city attorney from participating in a political action committee. On Monday, Janz resigned from the board of a PAC he founded, the Voters Protection Project.

He tells Politics 101 he is also shutting down his consulting firm, Fortner Way Strategies, LLC.

Bredefeld asked Janz how he will “get up to speed” on municipal law.

Janz, a criminal prosecutor with the Fresno County District Attorney’s office, resigned his position as deputy district attorney on Wednesday. He replaces Douglas Sloan, who left for the city attorney job in Santa Monica in June.

Sloan is also a key witness in the criminal trial against City Council President Nelson Esparza. The district attorney’s office charged Esparza with attempted extortion. He is accused of telling Sloan to only work for the council majority or risk losing his job.

Park to Be Named for Dolores Huerta

A new park in west Fresno will be named after labor icon Dolores Huerta. It passed on a 6-0 vote.

Huerta helped found the United Farm Workers and continues to be a civil rights leader.

“I think that given the theme of the park, which is based off of ag, it would be appropriate to name this park after a civil rights icon who’s still living today in the Central Valley and continues to do the great work to uplift farmworker communities and farmworker families up and down the state,” said councilwoman Esmeralda Soria, the resolution’s sponsor.

Construction at the northeast corner of Dakota and Milburn avenues will start next summer, parks director Aaron Aguirre said. It will be paid for with Proposition 68 funds.

Bredefeld was absent for the vote. 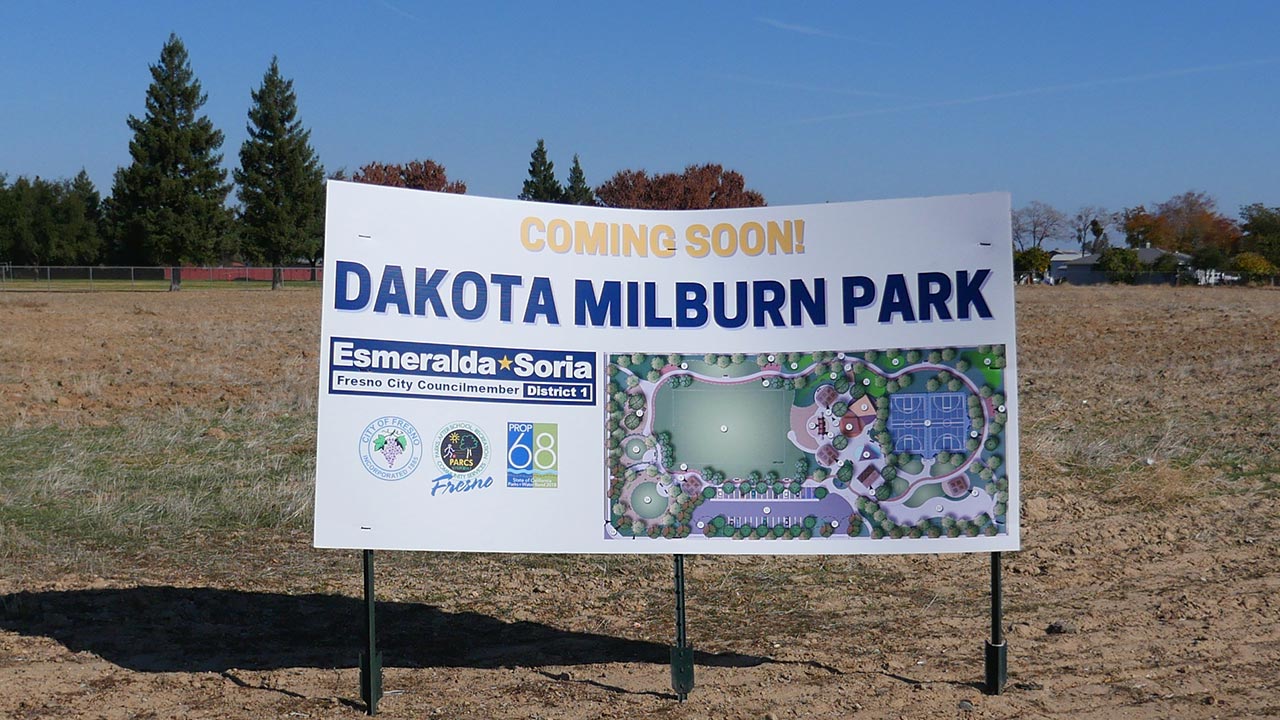 Thursday was the last scheduled council meeting for Soria. In an impromptu ceremony, Esparza presented her with a plaque. She leaves for the state Assembly on Monday.

“If you guys know me, I’m relentless. I don’t give up because my parents never gave up. They never gave up on having the American dream here. And so I believe that I, too, can not ever give up on myself, nor on my community, because my community deserves to have the best,” Soria said.

Even Bredefeld, the most conservative council member, had nice words to say about Soria. He acknowledged that they didn’t always agree with each other, but he praised her for representing her constituents and staying on top of budgets.

Four of her city council colleagues and Dyer posed for group pictures. Absent were Bredefeld, who participated in the meeting remotely, and Mike Karbassi.

Karbassi also ran for the Assembly seat and did not advance beyond the primary. He later sued Soria for defamation because of claims made in a campaign mailer. A judge tossed the lawsuit, and Karbassi may be on the hook for legal fees.

Related Story: Soria Reflects on Her Council Legacy and the One Fix That Eluded Her 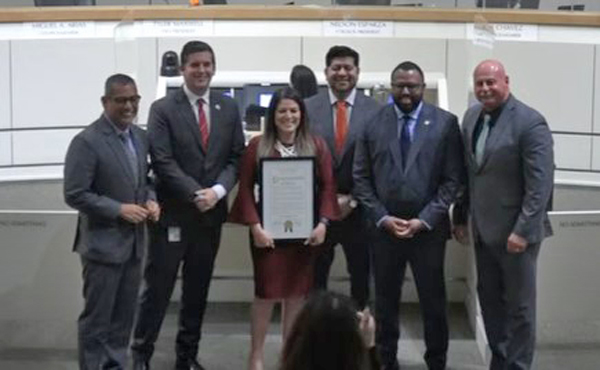 Incoming councilwoman Annalisa Perea said that Laura Rios will serve as her chief of staff.

It is a familiar position for Rios, who served as the chief for Paul Caprioglio before he was termed out as the District 4 representative in 2021. Rios has since worked in the city’s economic development department.

Perea is set to be sworn in on Jan. 3, although she could be appointed early to fulfill the remainder of Soria’s District 1 term.