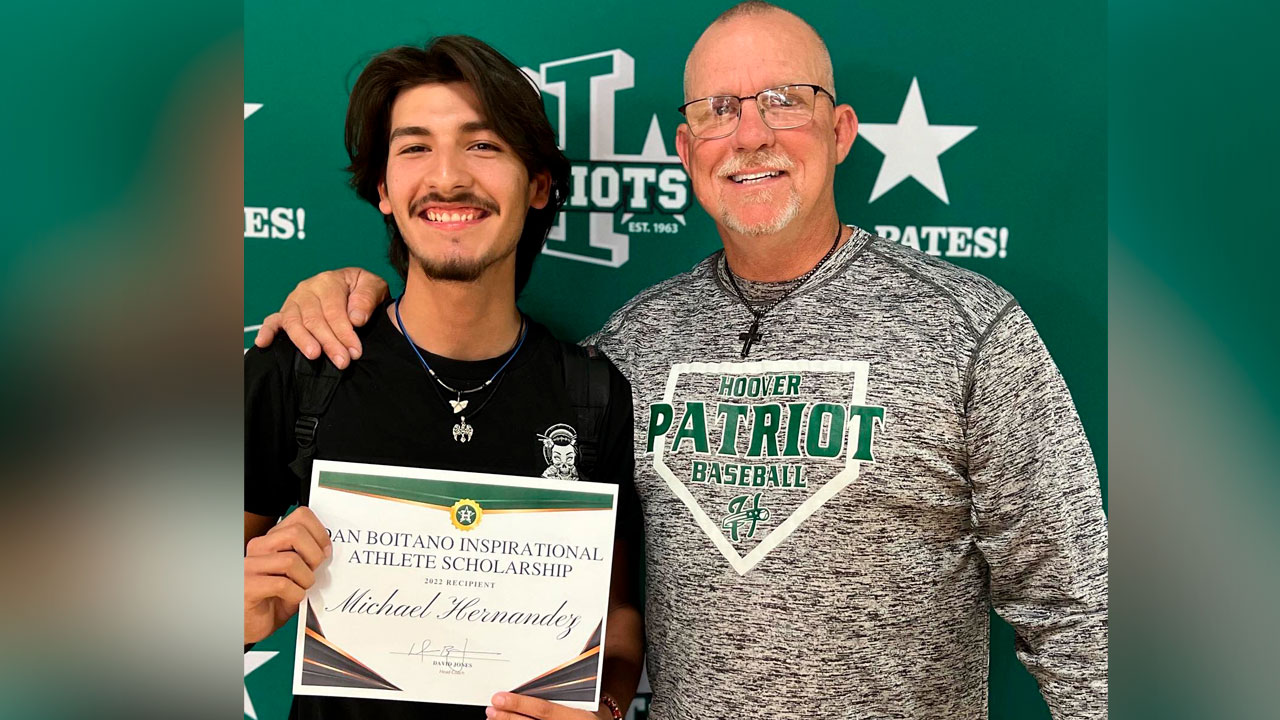 Michael Hernandez had never picked up a baseball bat prior to his senior year, when he and Hoover High baseball coach David Jones talked about him joining the school’s varsity team.

“Learning how to hit a baseball at age 17 is not normal.” — Dan Boitano scholarship winner Michael Hernandez

Michael, 17, was already known at the northeast Fresno high school for his athletic prowess as Hoover’s starting quarterback and a member of the school’s soccer team. But baseball?

That decision, he said in a speech at the Hoover Baseball Foundation banquet, had a profound impact on his life.

Hernandez’s impromptu speech was so inspirational, Jones told GV Wire, that he and former coach Hal Froese put their heads together and decided to start up a scholarship fund to recognize a senior baseball player for sportsmanship.

They named the scholarship after Dan Boitano, a Hoover star pitcher who went on to play 11 seasons of professional baseball, including parts of five seasons in the major leagues, before retiring in 1983. 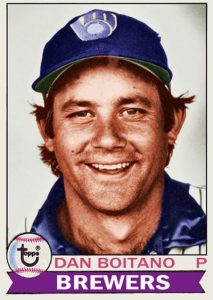 “I was literally going about my day when all of my teammates started texting me, asking where I was. And sure enough, I think one of our CA’s and our vice principal picked me up, took me to the (Hoover) Event Center, and I even called my mom because I was like stressing about it,” Michael told GV Wire. “I called her just to see if she can talk and she told me that she was busy. And then I see her walk into the Event Center with her phone. So it was definitely a surprise, and definitely a cool experience.”

Jones said he and Michael had developed a relationship earlier when Jones was an assistant football coach, so when he was named head baseball coach, he wanted a player like Michael who could help him improve the team culture.

Jones said he told Michael that he would be used primarily as a baserunner but would otherwise spend a lot of time on the bench. His value to the team would be as a team leader, someone who would engage with the other players and help build team spirit.

There was no expectation that Michael would jump into the starting lineup, Jones said. “Learning how to hit a baseball at age 17 is not normal,” he said.

Michael said he soon discovered a sense of comradery among his baseball teammates that he had not experienced on the football team. So when he had the opportunity to make his impromptu speech at the banquet, he said it came from his heart, not prepared notes.

“I said I feel very accepted to this team and I loved each and every one of my teammates, even though, you know, of course, it’s a bunch of teenage boys,” he recalled. “We’re all going to get on each other and there’s going to be some joking going around. But at the end of the day, we all come together as a family and I just appreciated them for that and letting all the freshmen know they helped me get better, not just as a baseball player, but as a human being. And it made me want to kind of kind of guide them in the right path.”

Michael said that playing on the baseball team gave him experiences that he would not have had otherwise, including his first-ever varsity win. The football team had not won a game in his junior and senior years, so when Hoover defeated Coalinga High, Michael said he turned to Jones and told him how excited he was for his first varsity win.

“I was sitting down the whole time, but I cheered for my teammates, and I made sure that my presence was well known,” he recalled. 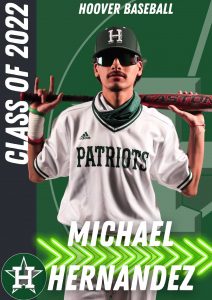 By the time the season ended, Michael, an outfielder, had played in six games, had five at-bats, and scored one run, according to the MaxPreps website.

“He (Jones) told me in the beginning of the season that all he really wanted me for was baserunning, which I was totally fine with because he knew I could run a bit,” Michael said. “And going into the season, that’s all I thought of being was a baserunner. And then to find out that I would eventually start a couple of games and even get my first hit of my whole baseball career … it was pretty exciting.”

The Dan Boitano Scholarship is a $1,000 award that will be given to winners in $500 increments, the first at the start of fall semester and the second at the start of spring semester so long as the student maintains at least a C average, Jones said.

Michael said he’s enrolling in Fresno State and plans to major in pre-health and ultimately get a degree in nursing, following in his mother’s footsteps. The scholarship money will come in handy, he said. He’s been able to save earnings from his job at Wendy’s, but every extra dollar will help.

And, even though he’s on the slender side for a college quarterback — MaxPreps pegs him at 5-foot-10 and 150 pounds — Michael is hoping he can gain a walk-on role on Fresno State’s football team.

As for baseball: “I just want to let anybody who might see this article know that I’m not going to play baseball at Fresno State, because I know a lot of people have been asking me that.”

Related Topics:BaseballFeaturedHoover High
Up Next