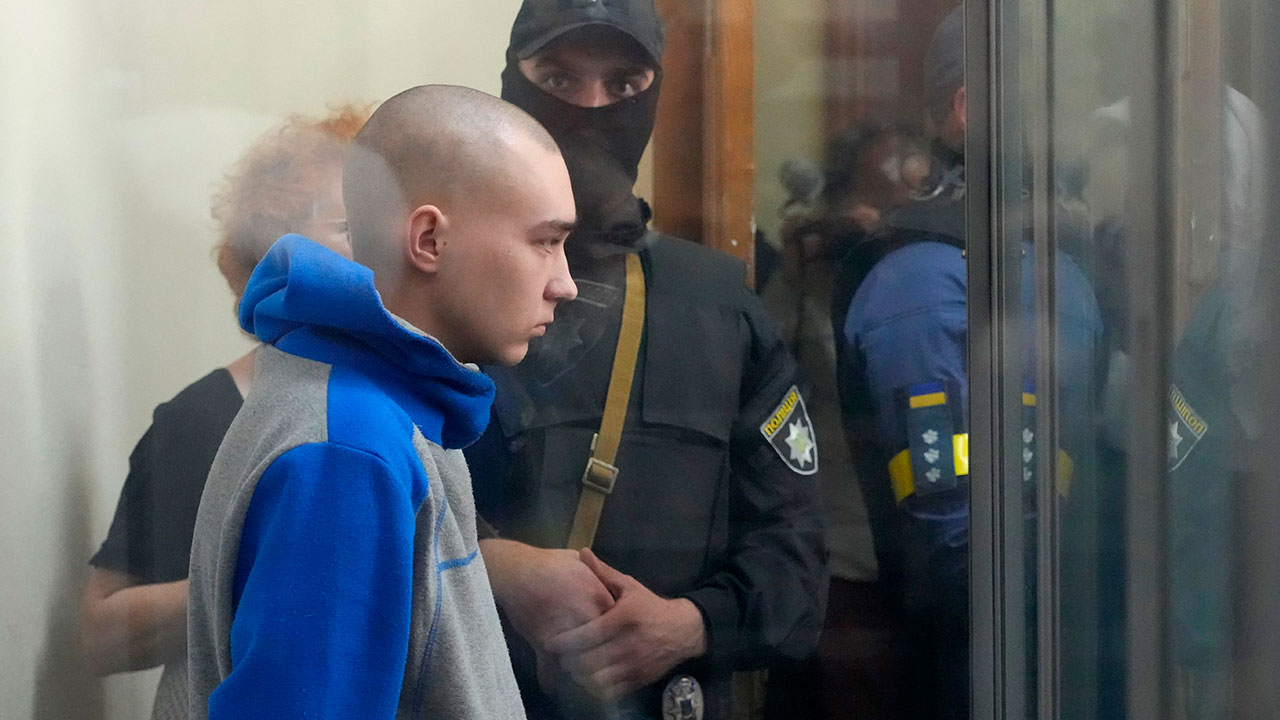 Pentagon Press Secretary John Kirby said Austin “urged an immediate ceasefire in Ukraine and emphasized the importance of maintaining lines of communication.” Kirby provided no other details of the call.

Over the past several months, Pentagon officials have repeatedly said that Russian leaders declined to take calls from Austin and Army Gen. Mark Milley, chairman of the Joint Chiefs of Staff. This is the first conversation between Austin and Shoygu since February 18, a week before the war started.

Related Story: America Must Embrace the Goal of Ukrainian Victory

KYIV, Ukraine — A 21-year-old Russian soldier went on trial Friday in Kyiv for the killing of an unarmed Ukrainian civilian, marking the first war crime prosecution of a member of the Russian military from 11 weeks of bloodshed in Ukraine.

The soldier, a captured member of a tank unit, is accused of shooting a 62-year-old Ukrainian man in the head through an open car window in the northeastern village of Chupakhivka during the first days of the war.

Scores of journalists and cameras packed inside a small courtroom at the Solomyanskyy district court in Ukraine’s capital, where the suspect, Sgt. Vadim Shyshimarin, sat in a glassed-off area wearing a blue and grey hoodie, sweatpants, and a shaved head.

He faces up to life in prison under a section of the Ukrainian criminal code that addresses the laws and customs of war. Ukraine’s top prosecutor, with help from foreign experts, is investigating allegations that Russian troops violated Ukrainian and international law by killing, torturing, and abusing possibly thousands of Ukrainian civilians.

Friday’s hearing in Shyshimarin’s case was brief. A judge asked him to provide his name, address, marital status, and other identifying details. He also was asked whether he understood his rights, quietly replying “yes,” and if wanted a jury trial, which he declined.

— Finland’s leaders in favor of applying for NATO membership

— ‘This tears my soul apart’: A Ukrainian boy and a killing

— Ukrainian circus comes to town, and stays in Italy, amid war

Follow all AP stories on Russia’s war on Ukraine at https://apnews.com/hub/russia-ukraine

KYIV, Ukraine — Ukrainian officials say their forces took out another Russian ship in the Black Sea.

Oleksiy Arestovych, an adviser to the Ukrainian president, said late Thursday the Vsevolod Bobrov logistics ship was struck as it was trying to deliver an anti-aircraft system to Snake Island. He said the ship was badly damaged but was not believed to have sunk.

A spokesman for the Odesa regional military administration said the vessel caught fire after the strike. There was no confirmation from Russia and no reports of casualties.

The British Ministry of Defense said this week that Ukraine has been targeting Russian air defenses and supply vessels on Snake Island in an effort to disrupt Moscow’s efforts to expand its control over the Black Sea coastline.

The Ukrainian military last month sank the Moskva cruiser, the flagship of the Black Sea Fleet. In March, the military destroyed the landing ship Saratov. 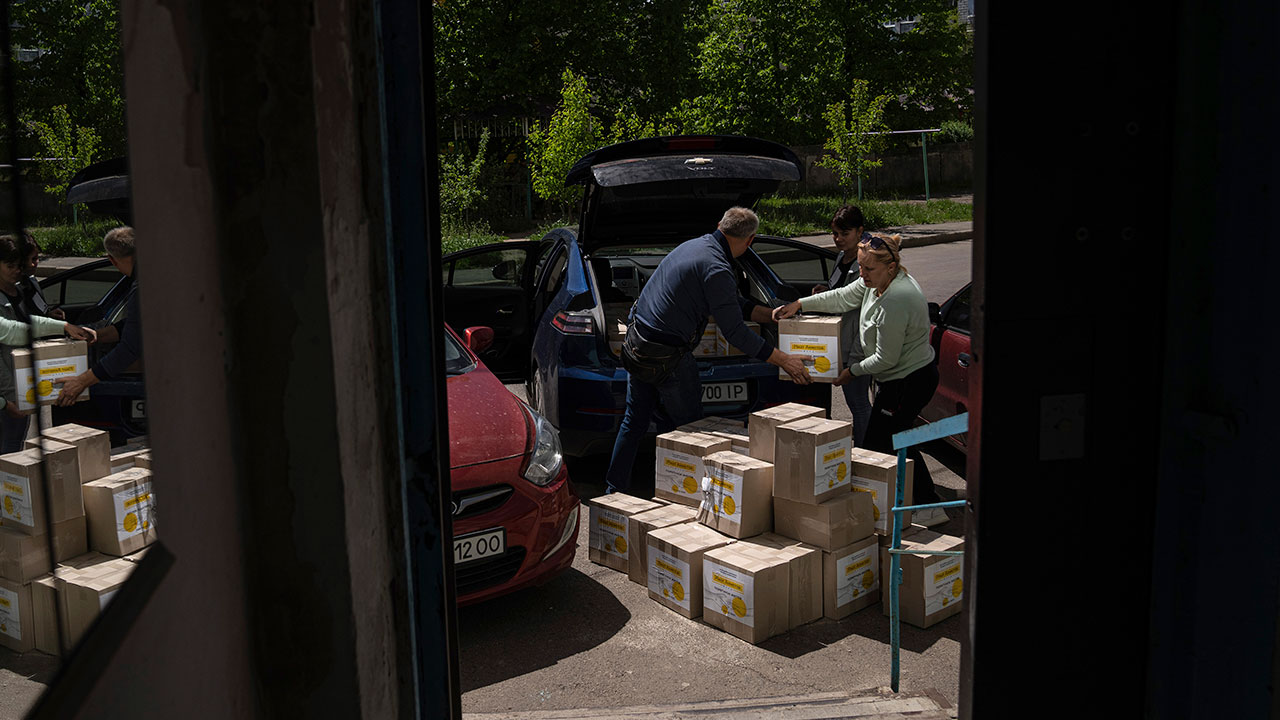 BERLIN — Natural gas prices rose Friday after Russian state-owned exporter Gazprom said it would no longer send supplies to Europe via a pipeline in Poland, citing new sanctions that Moscow imposed on European energy companies. The move doesn’t immediately block large amounts of natural gas to Europe but intensifies fears that the war in Ukraine will lead to wide-ranging cutoffs.

Gazprom said Thursday that it would ban the use of the Yamal pipeline that reaches Germany through Poland. While that cuts off a supply route to Europe, the pipeline’s entry point to Germany has not been used in recent months. Plus, Gazprom has already cut off gas to Poland for refusing to meet Moscow’s demand to make payments in rubles.

The fear is that gas disputes and cutoffs will keep escalating amid the war in Ukraine. Last month, Gazprom said it had completely cut off natural gas supplies to Poland and Bulgaria over the rubles dispute.

On Tuesday, Ukraine’s pipeline operator shut down a pipeline that carries gas from Russia to Europe, saying Russian forces were interfering with a compressor station in Russian-held territory and diverting gas. It asked Gazprom to move gas through another pipeline, which the company said it could not do. By itself, the shutdown was not expected to cut off major amounts of gas.

The 75-minute call on Friday “focused on the ongoing war in Ukraine and efforts to end it,” according to German government spokesman Steffen Hebestreit.

Scholz urged Putin to reach a ceasefire agreement with Ukraine as soon as possible and to improve the humanitarian situation on the ground, he said

The German leader also “clearly rejected the (Kremlin) accusation that Nazism was widespread in Ukraine,” according to Hebestreit.

When the two leaders spoke about the global food situation, Scholz “reminded (Putin) that Russia has a special responsibility” with regard to the issue as a major world supplier, Hebestreit said in a statement.

ISTANBUL, Turkey — Turkey’s president says his country is “not favorable” to Finland and Sweden joining NATO, as they are considering doing.

President Recep Tayyip Erdogan cited as a reason for his stance the alleged support by Sweden and other Scandinavian countries for Kurdish militants and other groups considered by Ankara to be terrorists.

“Scandinavian countries are acting like a guesthouse for terrorist organizations, including the PKK and the DHKP-C,” he said Friday, in reference to the Kurdish and leftist militant groups.

He also accused fellow NATO Greece of using the alliance against Turkey, saying Ankara did not want a repeat of that “mistake.”

WEISSENHAUS, Germany — The European Union is planning to give Ukraine about $520 million to buy heavy weapons that will help fend off Russia’s invasion.

The bloc’s foreign affairs chief Josep Borrell announced the funds at a gathering of top diplomats from the Group of Seven wealthy nations Friday.

But EU diplomats cautioned that any disbursement still requires ratification by all member states. Some countries are expressing misgivings, and approval is unlikely before next week. 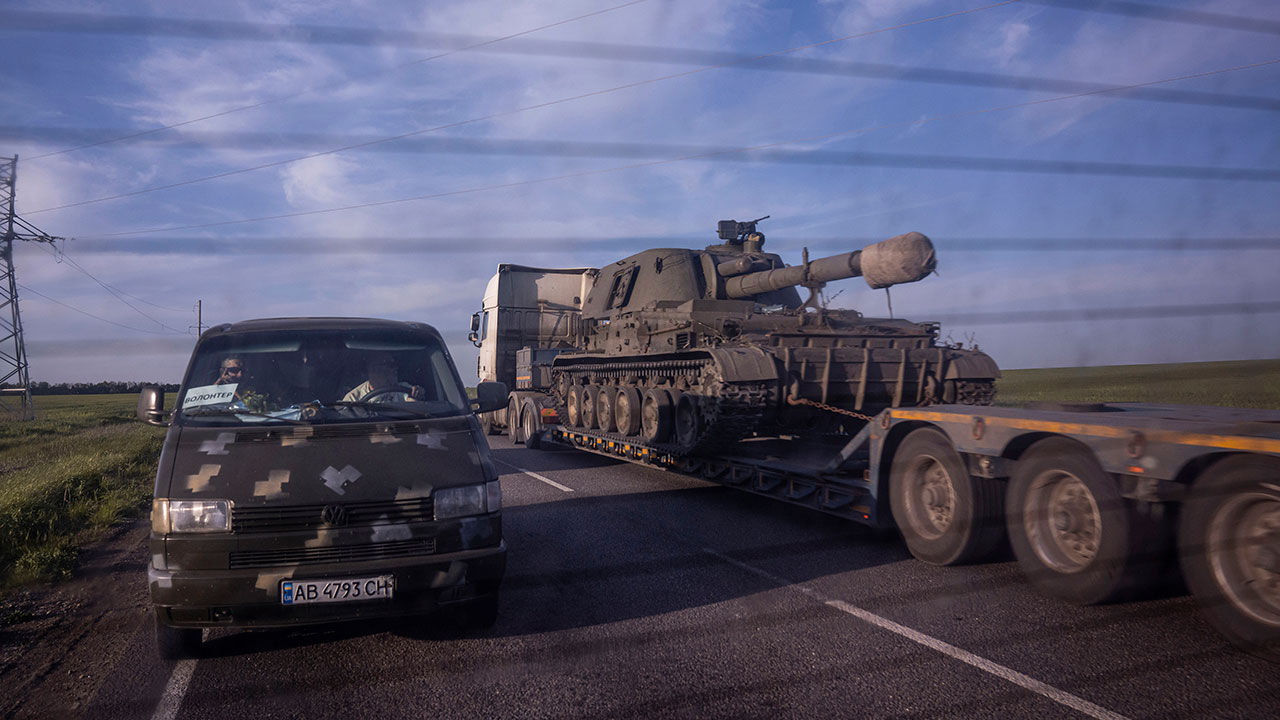 A truck transports a platform with a Ukrainian self-propelled artillery vehicle in Donetsk region, Ukraine, on Thursday, May 12, 2022. (AP/Evgeniy Maloletka)

LONDON — British military officials say the heavy losses suffered recently by a column of Russian armor demonstrate the pressure Moscow’s commanders are under to make progress in eastern Ukraine.

The U.K. Ministry of Defense on Friday confirmed news reports that Ukrainian forces prevented the Russian column from crossing the Siverskyi Donets river, west of Severodonetsk, on a pontoon bridge.

Russia lost “significant” elements of at least one battalion tactical group, as well as equipment used to quickly deploy the floating bridge, the ministry said.

“Conducting river crossings in a contested environment is a highly risky maneuver and speaks to the pressure the Russian commanders are under to make progress in their operations in eastern Ukraine,” the ministry said in its daily intelligence update.

The Ministry said Russia has failed to make any significant advances, despite concentrating forces in the Luhansk and Donbas regions of eastern Ukraine after withdrawing troops from other areas.

KHARKIV, Ukraine — The war has shuttered Ukraine’s schools and upended life for millions of children. But teachers are trying to restore some sense of normalcy — including by holding lessons in a subway station used as a bomb shelter in the eastern city of Kharkiv.

“It helps to support them mentally. Because now there is a war, and many lost their homes … some people’s parents are fighting now,” said teacher Valeriy Leiko. In part thanks to the lessons, he said, “They feel that someone loves them.”

Primary school-age children joined Leiko around a table for history and art lessons in the subway station, which has become home for many families and where children’s drawings line the walls.

Kharkiv, Ukraine’s second-largest city and a strategic target near the Russian border, has faced heavy bombardment by Russian forces.

German industrial giant Siemens AG says it is exiting Russia, where it has operated for almost 170 years.

“We condemn the war in Ukraine and have decided to carry out an orderly process to wind down our industrial business activities in Russia,” Roland Busch, the Munich-based company’s CEO, said Thursday.

Siemens had been one of the first companies to put all new business in Russia, along with international deliveries to the country, on hold following Russia’s invasion of Ukraine in February.

The company said it had been evaluating the situation with an eye on ensuring the safety of its 3,000 employees in Russia.

KYIV, Ukraine — Rocket attacks on Ukraine’s central Poltava region on Thursday were “perhaps the most intense for the duration of the war,” the regional governor said that same day.

“Today’s shelling of the Poltava region is perhaps the largest during the course of this full-scale war,” Dmitry Lunin wrote in a Telegram post. “12 Russian missiles hit the infrastructure in (the city of) Kremenchuk; most of them hit an oil refinery that was not operational anyway.”

“Rescuers are putting out a fire at the refinery. Luckily, no one was hurt,” Lunin added.

Kremenchuk is on the Dnieper River, south of Kyiv and north of Dnipro and Zaporizhzhia. The river, flowing north to south, divides Ukraine in half. In the south, it flows through Kherson before emptying into the Black Sea.