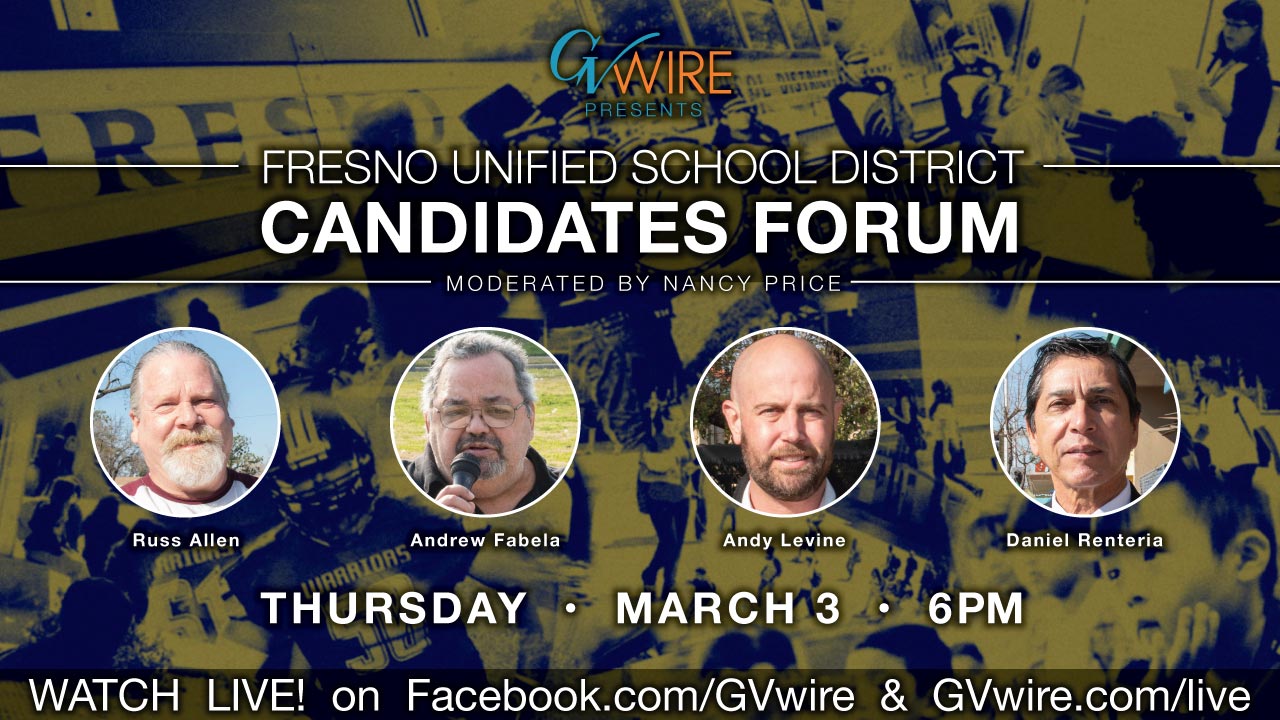 Three of the candidates who are running in the Fresno High Area 5 Trustee special election talked about School Board conduct, student academic performance, cops on campus, and other topics during a wide-ranging online live forum hosted by GV Wire on Thursday.

Candidates Russ Allen, a retired teacher, Andrew Fabela, a retired firefighter, and Daniel Renteria, a retired parole administrator, appeared at the forum, which was on Facebook Live. Candidate Andy Levine, a teacher, and community organizer, had initially agreed to participate in the forum but subsequently opted not to.

The questions included how they would partner with the Fresno Teachers Association to improve things for students and teachers, what aspect of education they would focus on if they are elected to the Area 5 seat, whether they would have voted to change the Fresno High mascot, and whether the district needs to increase resources for special education.

Asked what he would do if elected to turn around student performance, Fabela said he put more focus on K-8 education and end social promotion, when students are automatically moved to the next grade level whether or not they are ready academically. After Slater Elementary was taken over by the state 20 years ago, parents were told by the state intervention team that their students would not be promoted until they were at grade level.

Asked whether he would support restoring police officers for security on middle school campuses and keeping them on high school campuses, Allen said he’s wholeheartedly in favor.

“I know many teachers that I worked with who felt safer because the policeman was there,” he said. “But more importantly was the relationship that was quite often built between an officer and students that are sitting at that crossroads of life, trying to make a decision of what they want to be when they grow up. And having this positive role model there, I have seen taking the kid from that kind of cocky class clown to ‘I want to be like that guy.’ ”

Asked about the recent conduct of School Board members and whether he would be a flamethrower, a team player, or somewhere in between, Renteria noted that he has served on numerous boards and has experience as a consensus-builder.

“The distractions are distracting from what the board is meant to do, that is, to work on student achievement,” he said. “That is taking time away from the real work that we need to do. I think we just have to come together as mature adults and have an agreement and follow some rules and regulations and get the job done.”

Related Story: This ‘Rebel’ Goes His Own Way in Run for Fresno School Board

The special election for Area 5 was scheduled after longtime Trustee Carol Mills lost her battle with Lou Gehrig’s disease in July. The winner will serve the remainder of Mills’ term through November 2024.

Ballots for Fresno High area voters will go out starting March 14, and the deadline for voting is April 12.