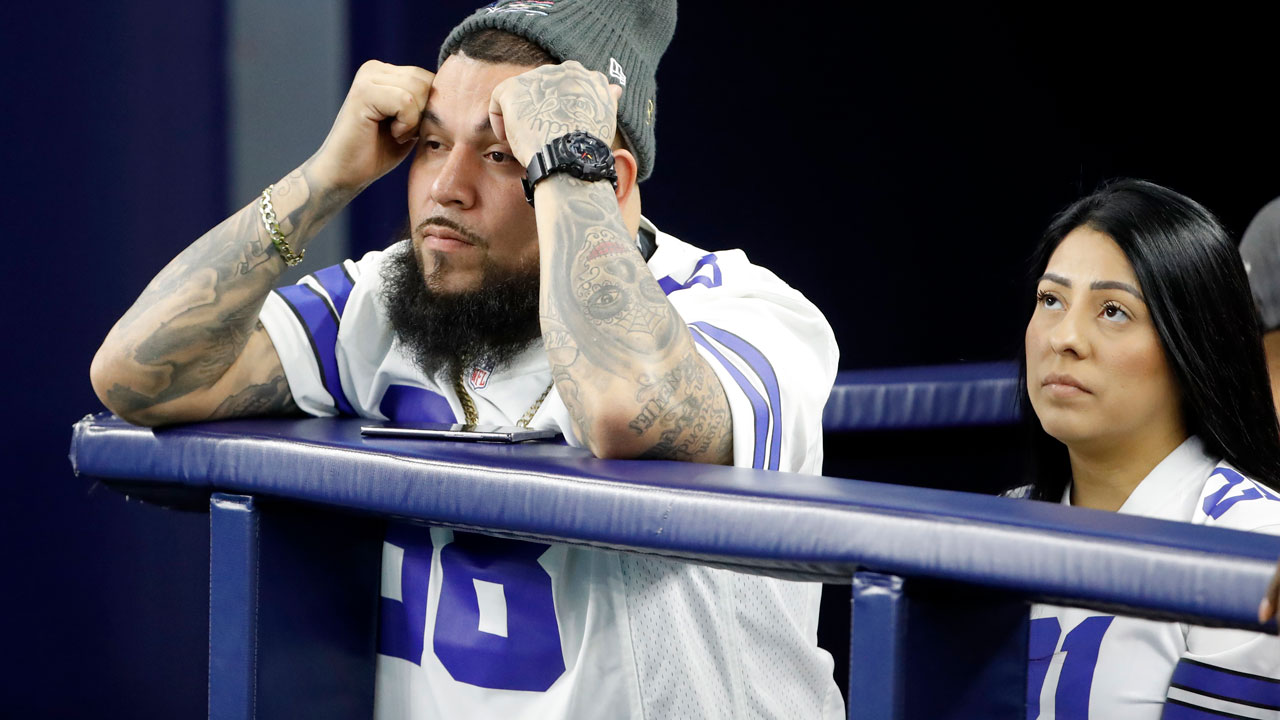 The faces of these fans tell the story of Sunday's playoff exit by the Dallas Cowboys. (AP/Roger Steinman)
Share with friends

They draw the most eyeballs (an average of 41.5 million viewers this past Sunday) and generate the most discussion.

Days after the Cowboys’ home loss to San Francisco, fans still are questioning how a team “with so much talent” could go one-and-done in the playoffs, complaining about the officiating, and debating coach Mike McCarthy’s future.

Before I talk about this weekend’s blockbuster divisional games, a dose of reality is in order for Dallas fans.

The Cowboys aren’t loaded with talent. Playing in the weak NFC East inflated their regular-season record (12-5) and those eye-popping offensive and defensive stats. Not only were they just 6-5 outside of their division, but they only defeated three teams that ended their season with a winning record (San Diego, New England, New Orleans). Most telling: Dallas was 1-3 against the AFC West.

Jones Would Rather Run the Show Than Win Super Bowls

Don’t get me wrong, the Cowboys are a solid team. With a break or two, they could have advanced in the playoffs. But they are nowhere near the juggernaut that owner Jerry Jones and Cowboys fans believe them to be.

Nor will they assemble a roster capable of winning the Super Bowl again as long as Jones is the owner. That’s because Jones falls in love with his players, ends up overpaying them, and creates salary-cap issues that prevent the Cowboys from having the depth to withstand the inevitable injuries that are an NFL fact of life.

Who are the overpaid Cowboys?

Start with QB Dak Prescott (four years, $160 million), add running back Ezekiel Elliott (six years, $90 million), and finish with wide receiver Amari Cooper (five years, $100 million). All are nice players, but none of them is among the best at their respective positions, and they don’t force defensive coordinators to stay up nights scheming ways to stop them.

The other big problem for the Cowboys is, the head coach makes decisions for an audience of one — Jones — instead of what’s best for the team.

I believe that Jones, who is a brilliant businessman, understands the errors of his ways. But he’d rather be fully in charge of the Cowboys than entrust NFL professionals with the decision-making — even at the cost of never returning to the Super Bowl.

We know this because Jones parted ways with Jimmy Johnson, who coached the Cowboys to two Super Bowl wins and assembled the roster for another. No Dallas coach since then has been more than a Jones’ hand-holder. And Dallas has now gone 26 straight seasons without reaching the Super Bowl.

49ers (11-7) at Packers (13-4) — You can bet that Aaron Rodgers and his Green Bay teammates were rooting hard for Dallas to take out San Francisco. Rodgers is 0-3 against the 49ers in playoff games, and that is on his mind heading into Saturday’s game.

Even though the Packers edged the 49ers, 30-28, the third week of the season, this is the worst possible matchup for Green Bay. San Francisco’s physical style travels well and the Niners aren’t likely to be affected by the windy, freezing conditions predicted at Lambeau Field. With Deebo Samuel and George Kittle, the 49ers force opponents to make hard tackles, and if you don’t wrap them up completely, they end up with chunk plays.

San Francisco coach Kyle Shanahan protects Jimmy Garoppolo with his play-calling, but there will be a time or two when the 49ers will need their quarterback to make a big play. The 49ers also must avoid the special team breakdowns that have plagued them.

I like the 49ers in this one, but if Rodgers and Davante Adams have big days and the Packers’ defense bends without breaking, Green Bay could again host the NFC title game.

Rams (13-5) at Buccaneers (14-4) — I don’t see LA losing this one even though Tampa Bay is 8-1 at home this season and the GOAT, Tom Brady, ripped apart the Eagles to open the playoffs.

The Rams handled the Bucs during the regular season — even with Brady throwing for 432 yards. And now Tampa Bay’s offensive line is banged up, which should allow the Rams to relentlessly pressure Brady.

With Bucs wideouts Chris Godwin and Antonio Brown gone for the season, the Rams likely will assign Jalen Ramsey to cover Mike Evans all over the field, complicating things for Brady. In addition, unlike Philadelphia which used vanilla defensive schemes, the Rams will disguise their coverages.

The X Factor for the Rams is QB Matt Stafford. If he sticks to the script — as he did against Arizona — the Rams will advance. But if the Bucs scare him into trying to throw the football all over the yard, LA could stumble. 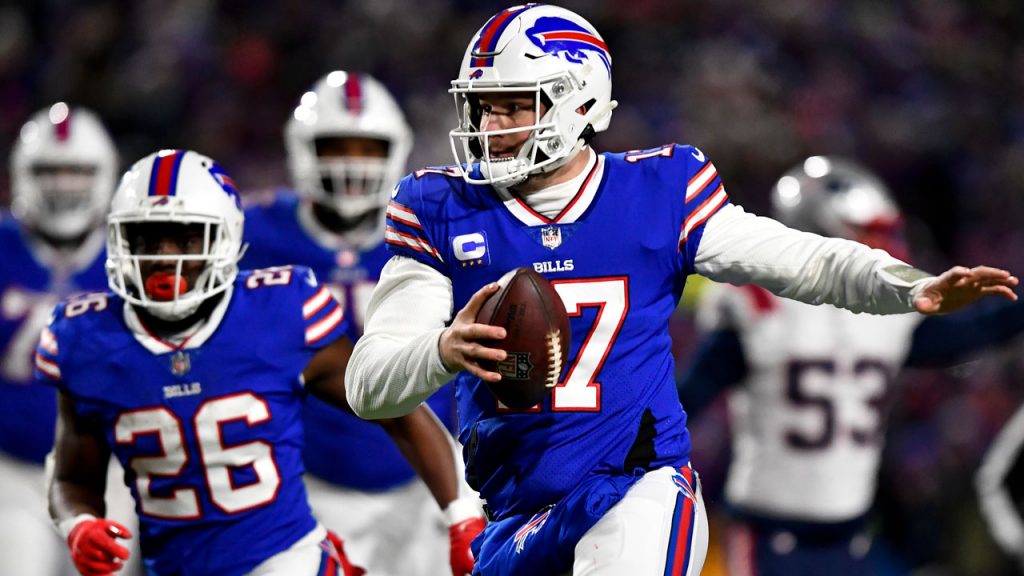 Bills (12-6) at Chiefs (13-5)  — Buffalo’s Josh Allen and KC’s Patrick Mahomes are like space aliens with their arm strength and ability to make plays outside of the pocket. I’ve never seen any other quarterbacks quite like them. CBS, which is broadcasting Sunday’s game, will have to break out the wide-angle camera lenses because both are able to produce plays spanning 80 yards.

As we’re both from the Valley, I’ve known Josh since he was a little guy. Check that, even when he was young, he was never little. With the Bills, he has become their offense. Don’t be surprised if he throws 50 passes and runs with the ball 10 to 15 times.

I met Patrick for the first time when he visited the NFL Network before the 2017 draft. The producers had us hook up in a throwing contest, and when one of his passes was clocked at 68 mph, it made my jaw drop.

The Chiefs have the better defense and they’re playing at home. But, if Josh replicates the virtually perfect game he had against New England, well, there’s no defense for that.

Bengals (11-7) at Titans (12-5) — The No. 1 question: How healthy is Titans RB Derrick Henry? If he can go on Saturday, it will be a long day for Cincinnati because we’re talking about the NFL’s premier running back taking the field with fresh legs against a Bengals defense worn down by the rigors of 18 games.

.@KingHenry_2 said he feels good, and he’s ready to do his part. @Titans pic.twitter.com/Kt7uMOhpFs

If Henry makes it back from ankle surgery, the Titans will field a three-headed monster that also includes wideouts A. J. Brown and Julio Jones. When they’ve been together, the Titans have averaged 7.0 yards per play.

Cincinnati’s Joe Burrow and Ja’Marr Chase play pass-and-catch as well as any NFL duo. However, Tennessee coach Mike Vrabel has a history of dialing up unconventional schemes to take away the opponent’s best players.

The Bengals have had a great season, but it ends here.