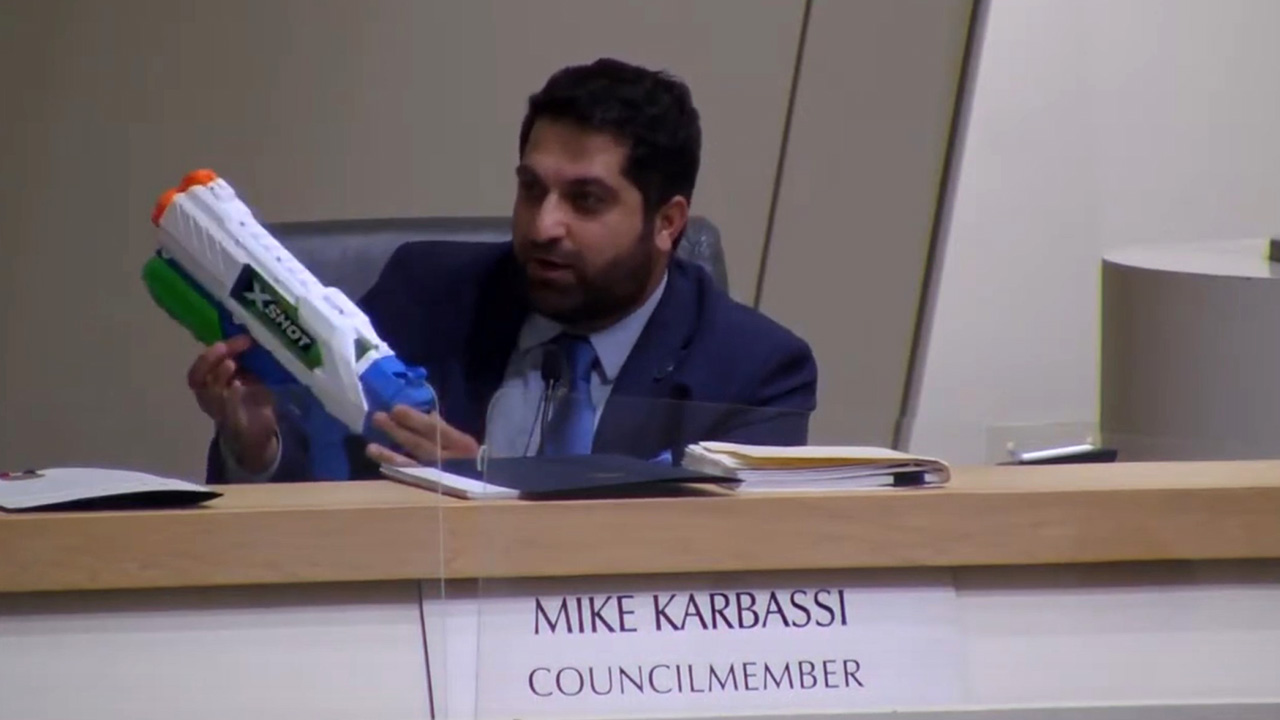 Councilman Mike Karbassi shows off a squirt gun to make a point during the smoking ban in apartments debate (Image: screenshot)
Share with friends

The Fresno City Council gave preliminary approval to ban smoking in apartment units. On a 5-2 vote, renters could face fines and possible action from their landlords starting Jan. 1.

As he told GV Wire earlier in the week, Councilman Tyler Maxwell — one of the ordinance’s authors — talked about his motivation.

Councilman Garry Bredefeld said while he appreciated the intention, he opposed the prohibition. Among his arguments: the bill treats renters and homeowners differently, and doesn’t address smoking cessation measures nor enforcement questions.

Related Story: No Smoking, Toking, or Vaping in Fresno Apartments?

Also skeptical of the ordinance was Councilman Mike Karbassi. He questioned how code enforcement is supposed to enforce the ban.

“I’d like to introduce a little bit of levity because I do have some concern about concerns over private property rights,” Karbassi said as he pulled out a toy squirt gun. “It’s not loaded and I don’t have a CCW, but this is a very interesting weapon. It’s got plenty of range. … So when we go and see someone smoking in their own home, we can fire this and put out that cigarette or that cannabis, whatever they’re using.”

The ordinance bans smoking tobacco, marijuana and vaping in apartments with four or more units. Smoking would be allowed in designated smoking areas.

Karbassi and Bredefeld provided the only no votes. The ordinance will come back to the council for ratification.

Anti-smoking advocates spoke during the debate, supporting the measure. However, several speakers wished restrictions would go further — including applying to balconies, rental homes, and condos.

Terzakis’ concern was having landlords referee a smoking dispute between tenants. Those concerns were alleviated with a late addition to the ordinance.

The landlord’s enforcement role is to provide a written notice when their is an accusation of smoking. As long as that provision is met, the landlord cannot be sued.

“This Ordinance does not create a private right of action for a tenant against a landlord for any damages the tenant may suffer due to another tenant’s breach of any smoking provision in a lease or other rental agreement, so long as the landlord has fully complied with the terms of this Ordinance,” the ordinance states.

While not on the agenda, several councilmembers and the mayor spoke about opening council chambers to the public.

The policy of an open chamber has changed several times since the onset of the pandemic. The council has met completely online, completely in person with the public allowed to attend, and in adherence to the policy in place since Aug. 19 — council and staff are in person, but the public is not allowed.

An emergency order went into effect on Sept. 13 that created the official policy. The ACLU told GV Wire earlier this week that such a system is contradictory to the Brown Act — the state’s open meeting law.

Councilmembers Garry Bredefeld and Miguel Arias — hardly friends on the dais — publicly supported reopening the chambers to all.

“The closure of this building has been nothing more than virtue signaling for the media by authoritarian politicians that work in this building and serve on this dais,” Bredefeld said.

Others appeared to be moving toward opening chambers.

“I heard my colleagues loud and clear. This was never an intent to prevent the public from participating,” City Council President Luis Chavez responded.

“It’s a cold day in hell,” Councilman Nelson Esparza joked about the conservative Bredefeld agreeing with the ACLU.

In a Reaganesque moment, Bredefeld had a request of Mayor Jerry Dyer.

“Mr. Mayor, you are the chief administrator. I call on you to open this chamber completely and immediately to the public,” Bredefeld said.

Data showing a COVID surge — zero ICU beds, hospitalized COVID patients, and the number of city employees in isolation — played a factor in closing city meetings to the public.

“Now, the COVID has plateaued in our in our county. Vaccines continue to rise more and more. ICU hospital beds are available, and I believe it’s appropriate now for those discussions to take place so that we can resume some form of normalcy and open up the council chambers as soon as we can. My commitment is we’ll have those conversations this week and in pursuit of that,” Dyer said.

The COVID committee generally meets on Mondays. The next city council meeting is Oct. 14, but other city committees — the parks committee and planning commission — meet this week.

Like the city council, the planning commission held its meetings in person without the public. The parks commission has always met virtually. 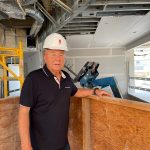 Paul Dictos says he still has the “enthusiasm and energy” to run for a fourth term as Fresno County’s assessor-recorder.

In making the announcement that he is running again in 2022, Dictos said he did not retreat during the pandemic.

“All during the pandemic, I continued to come to the office, rarely missing a couple of days [sic] … Throughout this crisis, my staff, many of whom have been working remotely, kept up production to pre-pandemic levels,” Dictos said in a news release.

The assessor-recorder is responsible for assessing property values and handling vital records such as birth certificates.

All other county incumbents have filed for re-election but are yet to draw challengers.

State Eviction Moratorium Ends, but Fresno Renters Protected. Here’s How To Get Help.