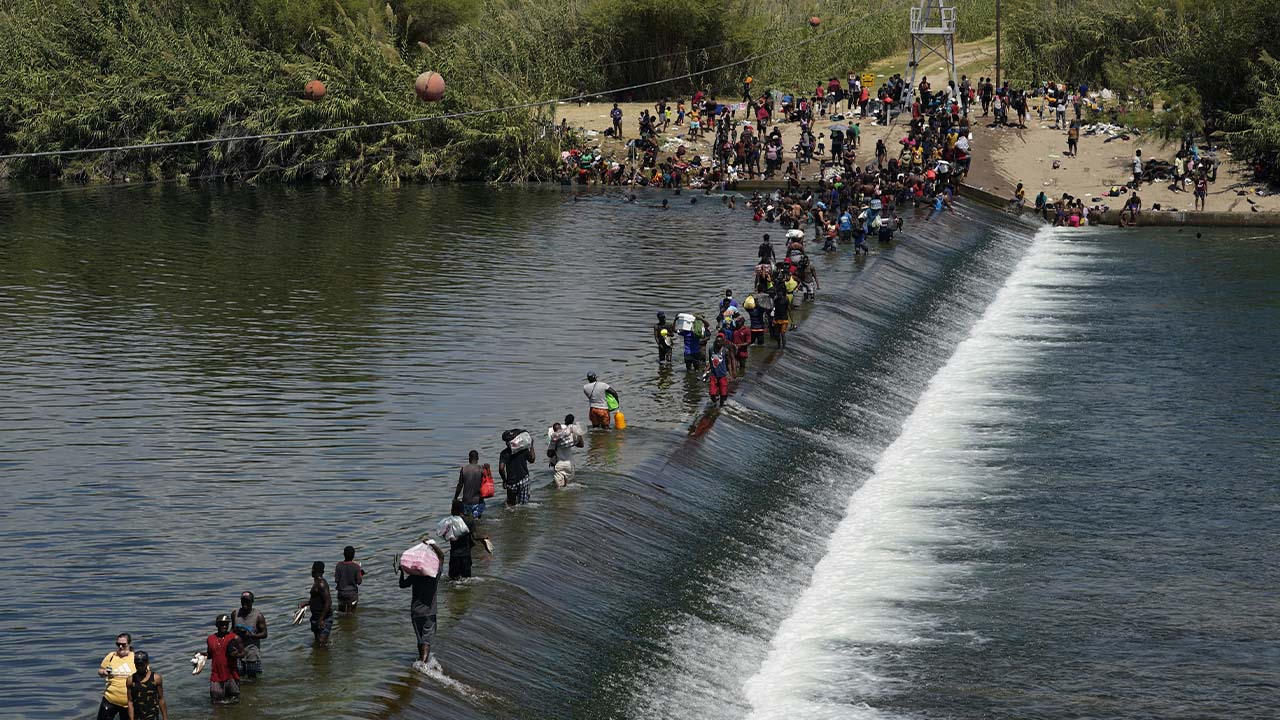 Haitian migrants use a dam to cross into the United States from Mexico in Del Rio, Texas. (AP Photo/Eric Gay)
Share with friends

WASHINGTON — President Joe Biden is caught between a hard place and an even harder one when it comes to immigration.

Biden embraced major progressive policy goals on the issue after he won the Democratic nomination, and he has begun enacting some. But his administration has been forced to confront unusually high numbers of migrants trying to enter the country along the U.S.-Mexico border, and the federal response has inflamed both critics and allies.

Much of the anger is centered on the administration’s immigration point person, Homeland Security Secretary Alejandro Mayorkas.

“Getting hit from both sides in the matter of immigration is no surprise,” Mayorkas said on NBC last weekend. “We are in the epicenter of the country’s divide, regrettably.”

The result is that immigration has become an early and unwanted distraction for an administration that would rather focus on the pandemic, the economy and other policy priorities.

Just 35% of Americans approve of Biden’s handling of immigration, down from 43% in April, when it was already one of Biden’s worst issues, according to a new poll from The Associated Press-NORC Center for Public Affairs Research. Immigration is a relative low point for Biden within his own party with just 60% of Democrats saying they approve.

Images of Border Patrol agents on horseback blocking Haitian migrants from crossing the Rio Grande only added to the angst. While the widely shared photos incorrectly suggested that agents were using their reins to whip at mostly Black migrants, Mayorkas and Biden expressed outrage at the tactics and Homeland Security is investigating.

The outcry was such that Mayorkas was asked if his department was a “rogue agency.” He responded, “I couldn’t disagree more vehemently.”

Some of Biden’s strongest supporters on Capitol Hill and among outside immigrant advocates had already been expressing outrage about the administration’s continued reliance on a Trump-era public health authority, known as Title 42, to rapidly expel migrants, including thousands of Haitians.

Marielena Hincapié, executive director of the National Immigration Law Center and onetime co-chair of a task force on immigration meant to unite Biden supporters with more progressive primary backers of Sen. Bernie Sanders, noted that the White House “has appointed some of the best people in our movement” to help run immigration programs.

But she is among those opposed to Title 42, which the Trump administration invoked early in the pandemic, ostensibly to slow the spread of COVID-19. It prevents people from making claims for U.S. asylum.

“This is the moment when friends need to have those courageous conversations with friends,” Hincapié said. “When they’re making the wrong decision.”

The administration’s refusal to halt Title 42 — even appealing a court order to stop relying on it to expel families — along with the lack of progress in Congress on a sweeping immigration bill that Biden introduced upon taking office has prompted supporters to warn of a return to the enforcement-heavy policies of President Barack Obama.

Immigrants Seeking Asylum in the U.S. Continue to Grow

The Obama administration in its early years drastically increased the number of migrants it deported in hopes of showing Republicans it had stepped up enforcement while trying to get its own comprehensive immigration package through Congress. Officials ultimately expelled a record 3 million people, which led some activists to label Obama “deporter-in-chief” but still didn’t produce congressional action on an immigration overhaul.

“The calculation that the administration is making at the moment is that they will have a better chance of getting Congress to act on broader-based immigration reforms if they can get the border ‘under control,’” said Theresa Cardinal Brown, managing director of immigration and cross-border policy at the Bipartisan Policy Center. “That was really the theory of the Obama administration.”

As did the Obama and Trump administrations, the Biden administration has been confronting an increase in the number of migrants trying to cross the border, either illegally or to present themselves to Border Patrol agents so they can claim asylum.

The total number of encounters with migrants along the U.S.-Mexico border reached just over 208,000 for August, a slight decline from July but still the highest since March 2000 and the highest since the last big increase in 2019, under President Donald Trump.

The current total is inflated by Title 42, with about a quarter of the encounters involving people who have been recaptured after they were previously expelled under the public health authority. The numbers also have been rising due to factors that include COVID-19 ravages on Latin American economies and a perception that Biden will be more welcoming than Trump.

Biden’s response has been to try to address the “ root causes ” of migration by increasing aid to Central America, which was cut under Trump, and restoring a program that enabled children from the region to apply for visas to join their families in the U.S.

His administration has also proposed a federal rule to protect immigrants brought to the country illegally as children.

“I’m confident that the president will use every tool at his disposal, but the administrative tools are not sufficient to fix what needs to be fixed,” said Cecilia Muñoz, director of the White House Domestic Policy Council under Obama. She blames staunch Republican congressional opposition, and Senate rules she says were incorrectly applied, for the expectation that immigration reform will not pass Congress as part of the budgeting process.

Legislative efforts aside, the administration has stopped the Trump-era practice of expelling children crossing alone from Mexico under Title 42, and has allowed thousands of migrant families to remain in the U.S. while they pursue asylum claims — a process that frequently ends in denial but can take years for a final decision.

It has, however, continued to use Title 42 to expel many families and nearly all solo adults, with Mayorkas repeatedly insisting it is a necessary public health measure, aimed at reducing the spread of COVID-19 in detention facilities.

Aaron Reichlin-Melnick, policy counsel at the American Immigration Council, argues that relying on Title 42 causes more trouble than it’s worth by inflating the total number of encounters, which are still far below what they were 20 years ago.

“Title 42 has created a significant amount of churn at the border, and the end result of this churn hasn’t been a more secure border,” Reichlin-Melnick said. “It’s been a reduction in the ability of people to seek protection and an overstressed Border Patrol, which doesn’t have the capacity to deal with that level of activity.”

A federal judge, ruling in a lawsuit brought by the American Civil Liberties Union and others, recently declared the reliance on Title 42 to deny people the right to seek asylum is likely illegal, and said he would issue a preliminary injunction halting its use. The Biden administration appealed, further infuriating the critics.

Anthony Romero, the ACLU’s executive director, said at a forum Monday that he is broadly supportive of administrative actions on immigration and of Mayorkas. But he said the ACLU, which filed more than 400 legal actions under Trump, won’t hesitate to keep challenging Biden on Title 42 and other matters.

“I think litigation is as important in holding the feet to the fire of our quote ‘allies’ as it is about fighting the foes of civil liberties and civil rights,” Romero said, “because that is what creates the political will.”