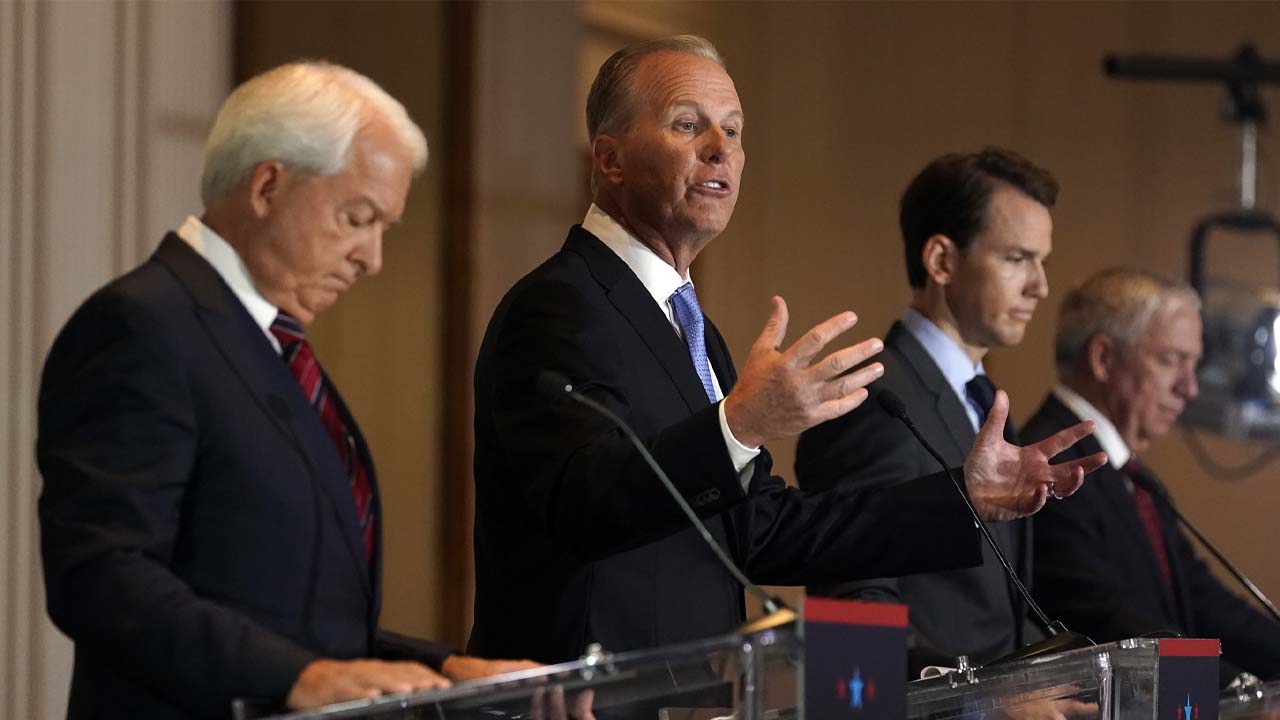 After months of build-up, California voters got their first prime-time glimpse at the major candidates vying to become governor in the upcoming recall election.

Some of them, anyway.

In the first — and conceivably only — debate before ballots begin hitting mailboxes later this month, Gov. Gavin Newsom, the focal point of the Sept. 14 election, sat out Wednesday night’s event.

So did his top-polling potential replacement, conservative radio host Larry Elder, who spent the evening at a Bakersfield fundraiser instead. His spokesperson warned that a “circular firing squad” among Republicans would only help Newsom.

The candidate with the most name recognition wasn’t even on the same continent: Caitlyn Jenner is taking a break from the California campaign trail to shoot the reality TV show “Big Brother VIP” in Australia.

While they generally refrained from attacking each other, they all took turns criticizing the governor on issues including homelessness, the scandal at the state unemployment department and his handling of the COVID-19 pandemic.

The four took to the debate stage at a distinctly Republican setting: the Richard Nixon Presidential Library in north Orange County. It’s a venue that served as a reminder of how far the California Republican Party — once a producer of presidents, U.S. senators and legislative power brokers — has fallen in recent decades.

But the stately debate hall also offered a reminder of the power the four Republicans on the stage hope to reclaim. A recent spate of polls suggests that while Newsom is still supported by a majority of registered voters, recall backers appear far more likely to vote. That enthusiasm gap could transform what many pundits predicted would be an easy win for Newsom into something relatively rare in California politics: A competitive statewide race for governor.

Or at least that’s the hope of those seeking to oust Newsom and the candidates. Here are four takeaways from the 90-minute debate, hosted by FOX 11 in Los Angeles.

Few issues united the four Republicans on stage like their disdain for public health mandates.

“I happen to have great faith in the ability of people to make decisions of their own,” said Ose, who spoke with the technical knowledge of a longtime lawmaker and, at times, a table-pounding indignation. “Instead of giving people mandates, we need to give them options.”

Kiley denounced the “hoopla” of the lotteries the governor rolled out to entice vaccine-wary Californians to get inoculated and warned of the “steps we’re taking towards mandates and passports.”

Late last month, Newsom announced that state employees and health care workerswould be required to get vaccinated or be subject to regular COVID testing.

This week, New York Mayor Bill de Blasio announced that the city would require proof of vaccination for restaurant diners, gym goers and visitors to other indoor public-facing businesses. That’s a first in the nation, though Los Angeles is considering its own requirement.

Despite being infected with COVID early on in the pandemic, Cox said he opposed the governor’s recent action to coax health care workers to get vaccinated. He also asserted that people who have already contracted the disease don’t need the vaccine, contrary to guidance from the federal Centers for Disease Control and Prevention.

Faulconer, who has long distinguished himself across California GOP-dom as a relative moderate, stressed that he and his entire family had been vaccinated and he encouraged everyone who hasn’t been to get the jab, too. But encouragement is as far as the state should go.

“I do not favor mandates, I favor education,” he said. “You’re not going to mandate your way out of the coronavirus.”

Evidently, that wasn’t quite far enough for co-moderator Hugh Hewitt, a conservative commentator, who asked Faulconer whether he would outright ban schools from requiring students to wear masks.

“I will look into doing it, 100%,” said Faulconer without unequivocally saying that he would. 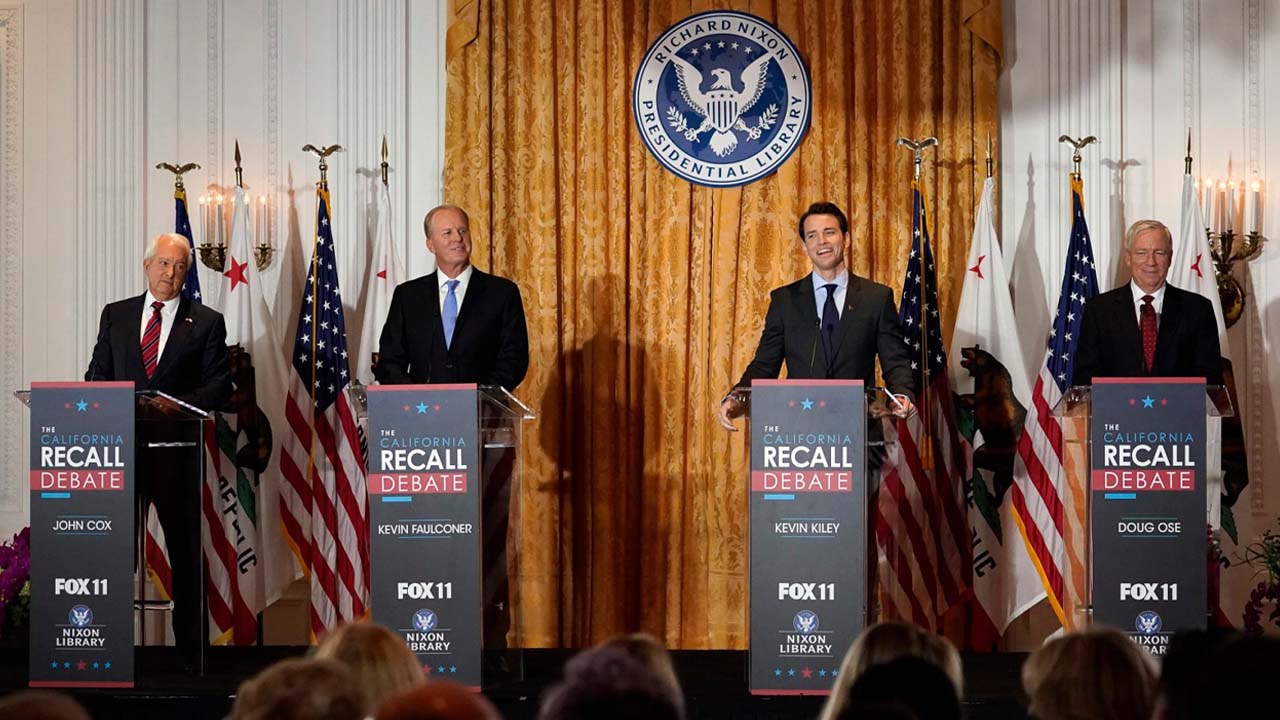 Is This a Fox News Primary?

For months, recall proponents and the candidates hoping to replace Newsom have dismissed the notion, regularly peddled by the governor and his allies, that the recall is a purely partisan effort.

“What Gavin Newsom wants to do is make this all about Republicans or Donald Trump,” bemoaned Faulconer.

But over the course of the 90-minute debate, viewers could be forgiven for mistaking the ostensibly nonpartisan campaign for a Republican primary.

Alongside FOX 11 anchors Christine Devine and Elex Michaelson, the debate was moderated by Hewitt and Trump national security advisor Robert C. O’Brien. The latter two steered the conversation toward favorite conservative hot-button issues that aren’t as relevant in California. Those included the teaching of “critical race theory” in schools, the role of Mexican drug cartels in fomenting the country’s opioid crisis and the various crimes of the Chinese Communist Party.

For their part, the four candidates mostly played along, touting their conservative bonafides.

Cox, piggybacking on the former president’s signature policy goal, said that a wall needs to be built across the entire southern border. Ose denounced the Chinese government’s alleged thievery of American intellectual property.

Faulconer did promote his reputation as a Republican mayor able to work with a Democratic-majority city council in San Diego. But he, too, denounced the threat posed by the “woke crowd,” called for a repeal of a recent expansion of the state Medicaid program to low-income undocumented immigrants 50 and older and accused Newsom of supporting the “defund the police movement” (he doesn’t).

That tenor of the debate may reflect the electorate being fought for by the four Republicans at the debate. Recent polling has shown that though a slim majority of registered voters do not support the recall, Republicans are much more enthusiastic about voting. And with a ballot with two questions — one on whether Newsom should be recalled and the next on who ought to replace him if a majority votes “yes” on the first — the governor’s supporters are more likely to say they plan to vote “no” on the first and skip the second.

That would leave a much more Fox-friendly crop of voters to pick Newsom’s replacement should he be ousted.

Democratic Assemblymember Lorena Gonzalez got an unexpected shout-out when Ose called her “the most powerful politician in the legislative branch” and said that if elected, he’d meet with her and try to figure out how to work together. A one-time labor leader from San Diego, Gonzalez has pushed a pro-union agenda since she was elected in 2013. She wrote the controversial state law limiting companies’ ability to hire independent contractors and wields significant power as chairperson of the appropriations committee.

“Nothing like a straight talking, unapologetically progressive Latina to scare some Republicans,” she wrote. “Don’t worry boys, I’m all in for @GavinNewsom and plan to continue to work with him to push my working class, all families agenda. #NoOnRecall”

Single-family zoning got lots of love, as the candidates vowed to oppose attempts to build more housing by allowing apartments in neighborhoods now zoned for single-family homes. The issue has been a contentious one in the Legislature in recent years, with bills stalling amid bipartisan resistance.

“When we see some of these pieces of legislation that want to eliminate single-family zoning in California, that’s wrong,” Faulconer said. “I will veto that.”

Yet everyone on stage seemed to agree that California needs more homes, that housing is too expensive — and that too many people here are living on the streets.

Farmers feed California and should not have their water cut back in times of drought, the candidates seemed to agree. Just this week, in response to the worsening drought, state water regulators decided to temporarily stop farmers and other landowners from diverting water from the Sacramento-San Joaquin Delta.

After other candidates spoke in generalities about the need for more water for agriculture to flourish, Ose chimed in with a stern tone:

On the other hand, the Chinese Communist Party took some punches from candidates after a moderator asked about reports that it’s taken intellectual property and is trying to influence American universities.

“We’re not shooting bullets yet, but we are at war with China,” Ose said.

Cox called it “an unaccountable party that controls that country, that feels it’s got to control dissent. It censors its people, it tries to control the economy.”

And then, drawing laughs, he added: “In other words, it’s kind of like Sacramento.”

Nose hair was not on our debate bingo card. But there it was, as the event drew to a close. In a moment of levity, a moderator asked Cox what’s something embarrassing that his kids would say about him? He replied, perhaps a bit too honestly:

Missing From the Action

Many issues that dominate discussion in the Democratic-controlled state Capitol barely garnered a mention during the debate. Climate change? Preschool and child care? The pandemic’s uneven impact on women and communities of color?

The candidates, all white men, said little that seemed targeted at appealing to California’s diverse electorate. They didn’t mention Latino voters — even though a new poll shows Latinos favoring the recall — and slammed policies Newsom has embraced to help immigrant families.

“We have done way too much in terms of expanding benefits that almost no other state has done,” said Kiley, who often spoke frenetically. “In this last budget, there were unprecedented benefits Medicaid given to undocumented immigrants in California.”

While Newsom has made a habit of talking about mothers, teachers and nurses in many of his public remarks — he’s also touted repealing taxes on diapers and menstrual products —  the GOP candidates seemed to avoid explicit attempts to win over female voters.

Also missing from the debate: Any pointed criticism of Elder, who is actually leading all of them in the polls. Or a dig at Newsom for dining maskless at the French Laundry for a lobbyist’s birthday party; though a moderator mentioned it briefly at the very end, candidates, surprisingly, never brought up the controversy that energized the recall effort.

Related Topics:California recall electionFeatured
Up Next