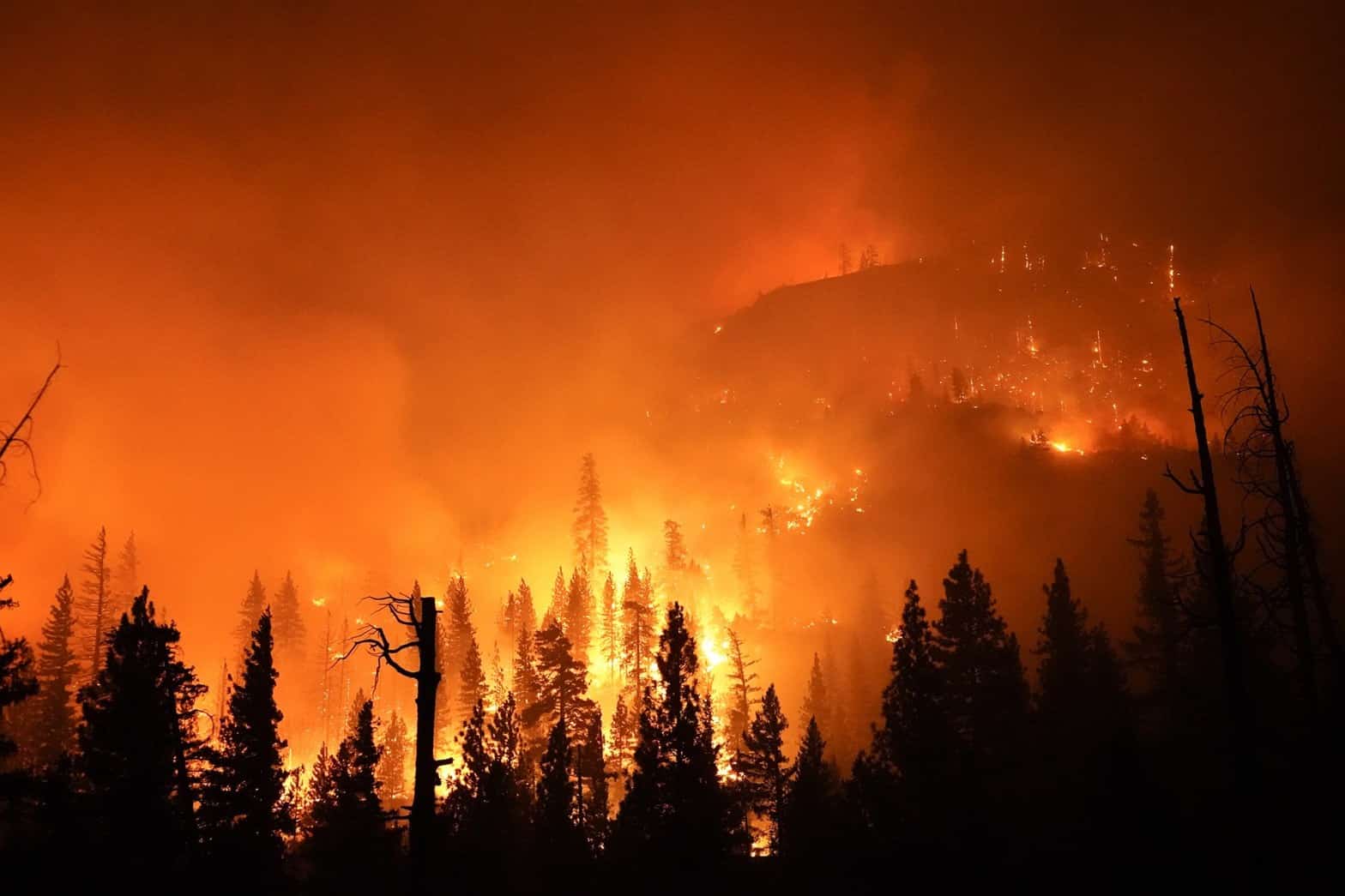 The most telltale number is 4.2 million.

2020 was a fire year of unforgettable and awful superlatives. In the new world of mega-fires, a series of wildfires exploded late in August with a barrage of lightning and fires that blazed for four months.

Before the season was over, 31 people, including 3 firefighters, lost their lives.

George Morris III, an assistant regional chief for Cal Fire, dwells on all these numbers. In the middle of last year’s desperate firefight, he was assigned to compile an historical account in part so the agency could learn lessons from the record-breaking season.

Morris wrote a 122-page report that is a compendium of relentless statistics and gripping narratives. 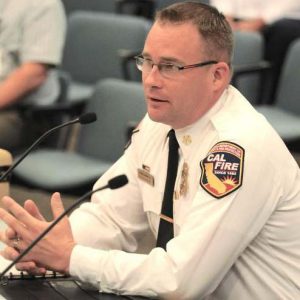 “The 2020 fire year “is on a scale that has not been experienced in California in at least 100 years.”

“The number for me is that astonishing 4.2 million acres,” said Morris, who comes from a family of firefighters and who is responsible for six of the state’s 21 fire units. “That is on a scale that has not been experienced in California in at least 100 years.

“To me, this is the 1910 watershed moment of this century. The Big Burn is what started the wildland fire suppression systems of that century. This one will likely inform the next century.”

The infamous Big Burn was an out-of-control conflagration in the summer of 1910, coalescing thousands of fires that burned 3 million acres in parts of Idaho, Montana, Washington and British Columbia. The fire burned over two days and nights, killed 86 people and ended only with rainfall and snow.

An hour and a half long flight over last summer’s August Complex fire, viewing mile after mile of burned forests, gave Morris a perspective of just how substantial the 2020 fires were. “It was all burning the entire time. Millions of acres,” Morris said. “It’s still hard to believe.”

A hard copy of his Fire Siege report has been placed in every Cal Fire station in the state.

Here are some key numbers pulled from the report:

Something remarkable happened the weekend of August 15, 2020. A storm slammed into central and Northern California, offering fire bosses the hope that the system would produce rain to smother the fire threat in the region.

Quite the opposite occurred. Rather than water raining down on bone-dry forests, the skies lit up with more than 15,000 lightning strikes, sparking  fire after fire. Making matters worse, the dry storm was followed by warm winds, fanning fires in all directions.

“It was a normal fire season until that point,”   Morris said. “Once we hit that lightning siege, it became evident that this was really an historic event.”

And, in what would become an oft-repeated phrase during the 2020 fire season, “The volume of incidents challenged available resources and immediately strained the California mutual aid system.”

The storm was created by the collision of two powerful weather systems and did produce rain, but high in the atmosphere.

Thunderstorms are not  unusual in California’s mountains, especially during the monsoon season. But thousands of lightning strikes are not common. “It certainly made things difficult,” Morris said.

With fires multiplying and overlapping at an alarming rate, state officials frantically called for help from neighbors. California made 935 requests for assistance; 193 were answered. Not for lack of compassion, but for a dearth of crews and equipment.

California was not alone in experiencing a summer of record fire emergencies. Major wildfires were burning across the West at the same time. Even with the longstanding tradition of mutual aid during emergencies, there was little help to spare.

The report laid out the problem in stark and simple language: “Early in the siege, the demand for resources exceeded supply.”

By mid-August, 14,000 firefighters were working in the state, an astounding number but not nearly enough. At the height of the fire siege, 18,500 firefighters battled blazes in California.

Cal Fire scrounged for more people, bringing back retirees and cancelling vacations. “We reached the ceiling of our capacity,” Morris said.

Major fires did not get the personnel they needed, especially in the critical early stages. The “SCU Lightning Complex and CZU Lightning Complex each managed limited resources in the first seven days of the incidents,” the report found. Fire bosses were instructed to do their best with what they had and wait for reinforcements.

International fire services sent staff. Fire crews from Mexico, Canada and Israel joined state and federal firefighters, giving relief to those working on fire lines for weeks without a break.

The volume of fine particles spewed by California’s wildfires last year was nearly 1.2 million tons, according to the Air Resources Board. That’s more than 120 times the total amount emitted by all of its cars, trucks and buses that same year.

The impact of the smoke is felt far from the flames: It can be seen from space, it blots out the sun thousands of miles away and it is very unhealthy to breathe.

The fine particles can lodge in lungs and have been documented to cause heart attacks and respiratory problems such as asthma attacks.

“The simultaneous occurrence of several large wildfires across the State created widespread, long-lasting smoke impacts to the large majority of Californians, regardless of the prevailing wind direction. Maximum fine particle levels persisted in the ‘hazardous’ range of the Air Quality Index (AQI) for weeks in several areas of the State,” the report found.

California leans heavily on its array of planes, air tankers and helicopters to attack fires, operating the largest airborne civil firefighting fleet in the world.

The state also used its new purpose-built Sikorsky S70i Fire Hawk helicopter.  Cal Fire ordered a dozen of the modern fire-fighting helicopters at a cost of $26 million each.

Aviation can be a useful tool in the initial stages of a wildfire. Water drops cool and can slow the progress of the flames. Retardant — colored red or orange so its drop pattern can be easily seen — lays down a chemical perimeter that retards the advancing flames. 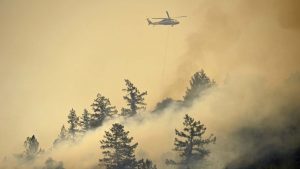 One line in the report stands out as an almost comical understatement: “Unquestionably, the cost of fire protection in 2020 is significantly higher than it was in 1980.”
Indeed. In the 1979-80 fire season, Cal Fire tapped the state emergency fund for about $12 million dollars. For last year’s fires, that figure was in excess of $1 billion.

That’s the emergency money that fills in after the agency exhausts the millions in its appropriated budget. It’s the sock-drawer cash that’s set aside for a rainy —or smoky — day.

Not only are there more frequent and more intense fires, like everything else in California, it costs more to do things than it did forty years ago. And, in the case of firefighting, there’s so many more ways to spend money.

There are more squadrons of planes and helicopters equipped for fires than could have been imagined in 1980, and more sophisticated and expensive technology assisting fire bosses to predict fire-spread and observe fire behavior in real time.

The state’s firefighting force is larger and better paid than four decades ago, and California requires more help from state and federal partners to fight fires at home.

Larger mega-fires that burn for months, called ‘campaign fires’, are more common. That requires building large-scale fire camps in backcountry with sophisticated facilities to feed, clean, shelter and tend to firefighters when they are off the lines. And massive supply depots replenish equipment and clothing damaged in the field.

Thirty-one  people lost their lives from California’s wildfires in 2020. It’s not the worst-ever total, but it is the third most-deadly year since 2013.

One fire alone, the North Complex, claimed the lives of 15 of those people. The fire was erratic and moved fast, burning 318,000 acres and destroying nearly 2,500 structures.

In terms of fatalities associated with a single fire, the North Complex is tied as the fifth most deadly. The 2018 Camp Fire, which destroyed the town of Paradise and killed 85 people, remains California’s most deadly fire on record. The Griffith Park fire in Los Angeles in 1933 killed 29 people and the Tunnel fire in the Oakland Hills in 1991 killed 25. The 2017 Tubbs Fire in Napa and Sonoma County killed 22.

For Morris, who is back on the firelines in what he fears could be another dangerous season, these numbers don’t fade away.

“I never thought I would see four million acres burn, or that at the same time that there was a one million-acre fire and there were two fires of 500,000 acres burning,” he said.

“I never thought I would see that. But unfortunately we may see it again. It’s looking to be another challenging season.”

Julie Cart joined CalMatters as a projects and environment reporter in 2016 after a long career at the Los Angeles Times. CalMatters is a public interest journalism venture committed to explaining how California’s state Capitol works and why it matters.