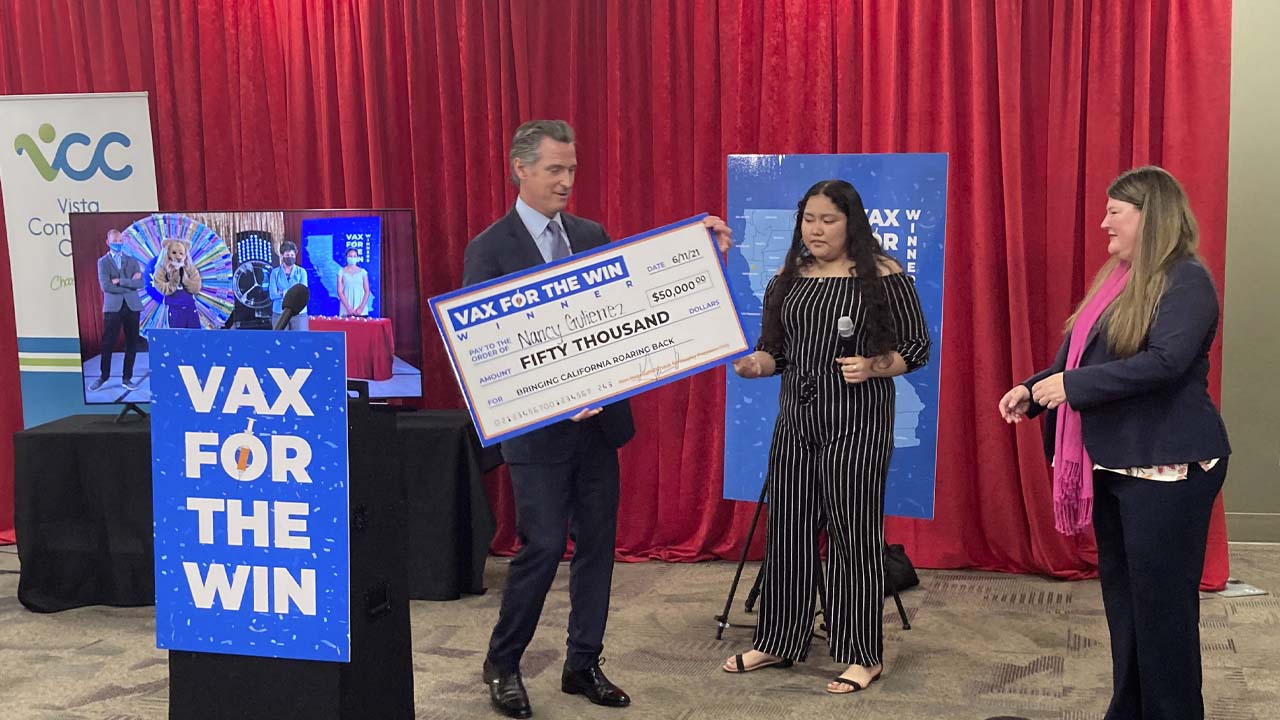 Residents from Fresno and Kern counties were among 15 people winning $50,000 each on Friday in California’s lottery among the nearly 22 million Californians who have received at least one dose of the coronavirus vaccine.

The big prizes will be handed out on Tuesday when Gov. Gavin Newsom will oversee a drawing where 10 people will win $1.5 million each.

State officials identified the winners by what county they lived in, with plans to contact them in the coming days.

But the big prizes will be handed out on Tuesday when Gov. Gavin Newsom will oversee a drawing where 10 people will win $1.5 million each. Tuesday is also the day that Newsom will lift the state’s stay-at-home order and end most restrictions on businesses — including allowing fully vaccinated people to stop wearing masks under most circumstances.

In addition to the $50,000 prizes, the state has pledged to give $50 gift cards to 2 million people who get vaccinated.

One of last week’s $50,000 winners was 17-year-old Nancy Gutierrez, who is about to finish her junior year of high school in the San Diego area. Newsom indicated the money would go into a savings account because Gutierrez is under 18.

Gutierrez appeared with Newsom at the news conference, smiling while holding a microphone and answering questions from the governor as he acted like a game-show host for the second week in a row. Gutierrez said she and her family initially did not believe the news that she had won and encouraged everyone to get vaccinated.

“I think most of us want life to go like back to normal and getting the vaccine would definitely help that,” she said.

Gutierrez also said she was skeptical when the call came alerting her that she had won.

“I think it’s confirmed now since I’m here,” she joked.

Newsom said California has administered nearly 40 million doses of the coronavirus vaccine and that 70% of the state’s adult residents have received at least one dose.

However, the governor said it would be “challenging” to for the state to achieve a rate of 75% to 80% of California residents vaccinated with one dose. Still, he believes the prize money has been an effective incentive.

Newsom said the state administered 1.43 million doses over the past week, an increase from the fewer than 1 million doses the week before.

Friday’s other winners were from: