Northwest Fresno resident Jene Shipman lives near where the large High-Speed Rail bridge is being built north of town. She’s also seen the buildup of a number of parked cars, RVs, tents, and trash on a nearby freeway onramp.

“I’m really tired of looking at this near Herndon and Highway 99 northbound on-ramp,” Shipman wrote on the Support Northwest Facebook group. “It’s been over three weeks and cars and the structures keep growing daily.”

GV Wire went there Tuesday and saw what Shipman saw. A few RVs with television antennas, a tent, a few parked vehicles, and a JB Hunt trailer parked in the mud. There was also considerable garbage piled against a chain-link fence.

“There are residents concerned about garbage and unsightly things,” says Karbassi. “Vehicles that haven’t been moved for a long time.”

Karbassi says his office is working to determine which jurisdiction the eyesore is in. 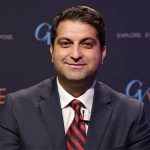 A Question of Jurisdiction

The spot is a dirt strip on the east side of Golden State Boulevard, south of the entrance to Highway 99.

It’s directly across the street from Gill Express Truck Repair. There are trucks parked on the side closest to the business. But a man who answered the phone at the truck repair shot tells GVWire he hasn’t given anyone permission to park on the other side of the road.

The California Highway Patrol sent a supervisor to the location earlier Tuesday to ascertain the land’s owner. A CHP supervisor confirmed that Gill Express Truck Repair has given permission for some vehicles to park in the area, but that could just be next to their property.

The CHP said it will return to the site Wednesday.

“We will be following up with the owner of Gill Express Truck Repair, Union Pacific Railroad, and High-Speed Rail to consider jurisdiction boundaries,” says CHP information officer Mike Salas. “CHP is responsible for HSR property.”

“Part of what people expect of us is to respond through code enforcement to make sure that we don’t have unsightly, unsafe areas,” says Karbassi.

Karbassi says that regardless of who has jurisdiction it’s part of the neighborhood he serves.

“If a vehicle is parked too long or there’s a safety hazard, there’s codes for that,” said Karbassi.

He also said that just because something is unsightly doesn’t necessarily mean the city can have it removed. “Property owners do have rights,” he says.

Karbassi says it’s important to remember that not all situations may be exactly as they appear, and a cautious, delicate approach is the most prudent way to proceed.

“Maybe there’s a way we can help them,” he explains. “Maybe we can work with organizations like Habitat for Humanity or there may be some grant funding where we’re able to actually solve the problem on all fronts.”