The Fresno Punch That Cost the Macho Man $6,000 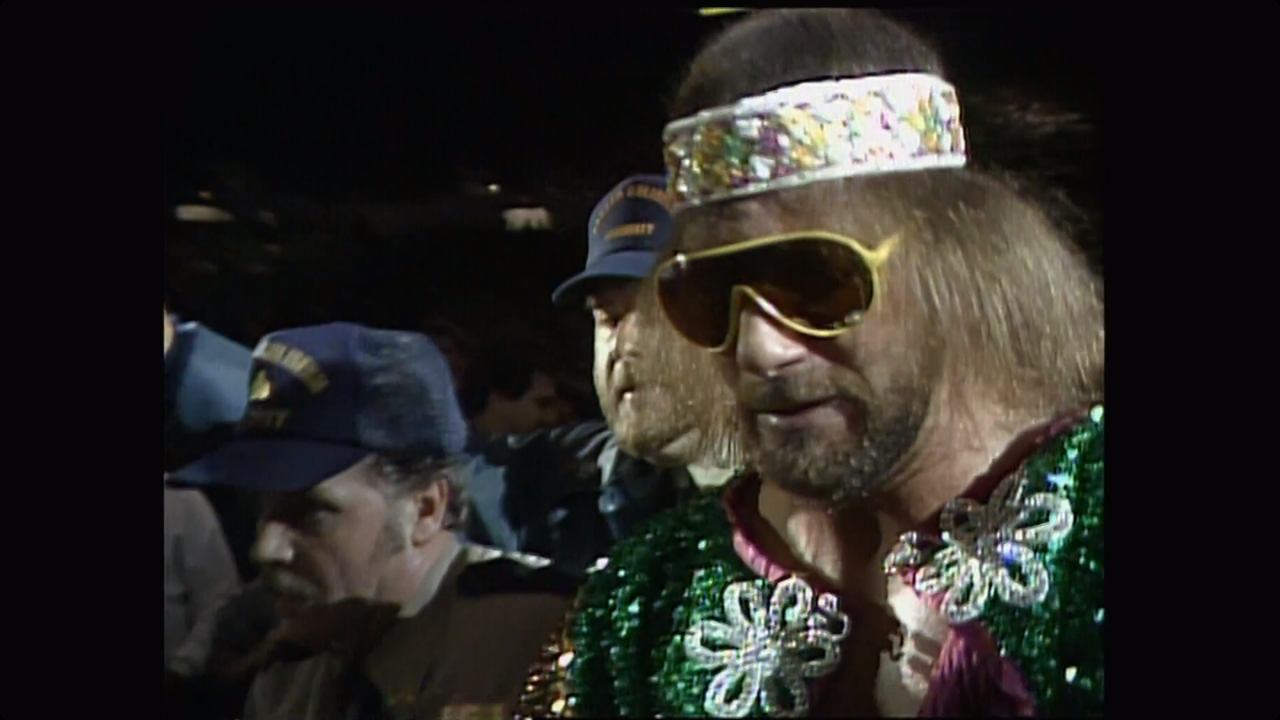 It should have been just another night for wrestling Hall of Famer Randy “Macho Man” Savage when he stepped into the ring at Fresno’s Selland Arena 35 years ago.

Known for his intensity, The Macho Man was headed down the aisle to defend his Intercontinental Heavyweight championship on April 30, 1986. His opponent was the man he controversially beat two months prior, Tito Santana.

Blending groundbreaking aerial tactics, superior brawling, and a tinge of cheating, Savage was used to trading fists with his opponents.

“He was definitely highly strung and had the ability to snap in certain circumstances,” wrestling personality Jim Cornette recently said on his “Cornette’s Drive-Thru” podcast about Savage’s reputation. 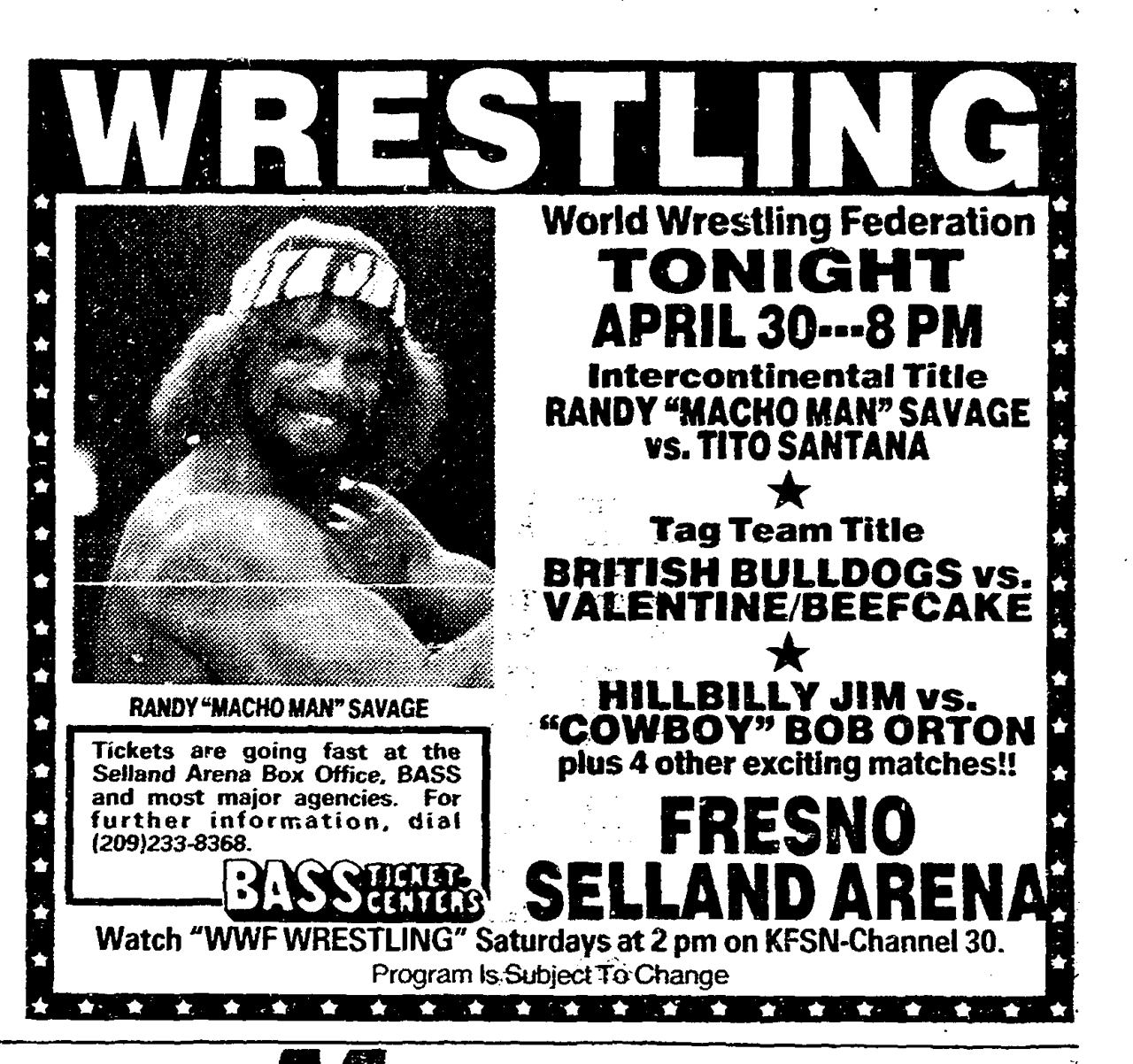 Savage did snap on that night in Fresno. A wayward punch cost him $6,000 striking a young fan.

The lovely Elizabeth, a beautiful demure woman, accompanied Macho Man to the ring. She was cast as the subject of verbal abuse and jealousy by Savage.

Any wrestler who merely looked at Elizabeth ignited Rage in the Macho Man. In reality, Savage and Elizabeth were married — the wrestling storyline caught up with reality in 1991.

“He just seemed really misogynistic to me,” Barbara Palas, then a 14-year old fan, said of Savage.

When a rude fan drew the ire of the “Macho Man,” Savage attempted to retaliate. Unfortunately, his punch missed the intended target and struck Palas.

The Fresno Bee reported that Savage got mad when two fans heckled Elizabeth as she and “Macho Man” walked to the ring.

“Some guy made some very interesting comment about Miss Elizabeth,” said David G. Edwards, Palas’ attorney. “I guess it was offensive enough that he turned around took a swing at the guy. That fellow ducked, and he caught (Palas) square, knocked her back and out.”

Palas has a different recollection.

“There were two gentlemen that were in front of me and one of them had actually thrown a soda onto Randy ‘Macho Man’ Savage,” Palas recalled. “He reached out into the crowd with a rabbit punch. And that’s what I ended up getting, was a rabbit punch to the face.”

Santana, as reported at the time, tried to help Palas. She remembers the popular wrestler visiting her in the hospital after the event.

Palas said she was knocked out cold. Her two front teeth were knocked out and she suffered a concussion. Even today, she has problems with her right eye.

It was the second time in 11 weeks that a WWF wrestler got in trouble with the law in Fresno. Unlike Roddy Piper, Savage was not arrested and continued to wrestle in town during his career. 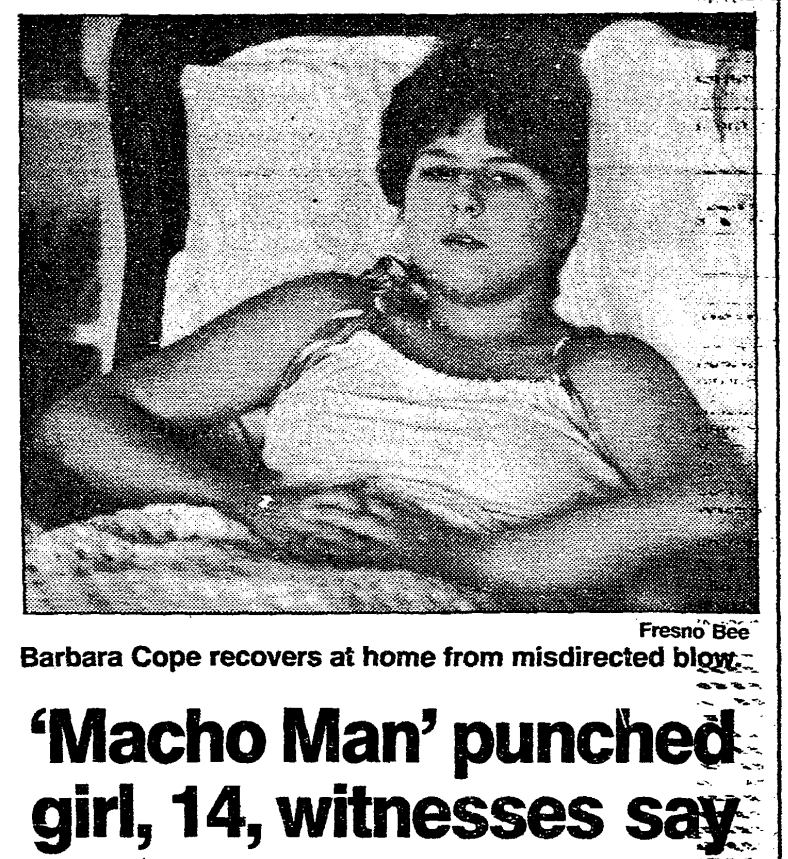 The Fresno Bee headline from 1986.

She met all the big WWF names of the time — Roddy Piper, Andre the Giant, Junkyard Dog. One time, Andre accidentally stepped on her foot while fighting on the outside of the ring. He apologized.

“I got to sit down with Jesse Ventura and share a meal,” Palas said.

Capt. Lou Albano even came to her house to share a six-pack with her stepfather.

A Lawsuit and a Macho Deposition

Palas’ family filed a lawsuit in October 1986, blaming Savage, real name Randall Poffo, and Titan Sports, Inc. — the parent company of the WWF — for the injuries she suffered.

Unlike Roddy Piper, who avoided future Fresno bookings to prevent law enforcement from carrying out an arrest warrant, Savage was served with his civil suit when he appeared at Selland Arena on Nov. 4, 1986.

Titan Sports and Savage hired local lawyers to defend themselves. The parent company claimed wrestlers were independent contractors, thus any damages would come from Savage’s pocket.

Marshall Hodgkins, who made a career as a criminal defense attorney, defended Savage in the civil suit.

“I met with (Elizabeth) and Randy Macho Man Savage at University Hotel,” Hodgkins said. “I was amazed at how incredibly big he was. To see me next to him is really something new and different.”

When he returned to Fresno the next year, Edwards — Palas’ attorney — met Savage for a deposition. Hodgkins appeared with his client.

“They needed a body there and Randy didn’t beat the crap out of me, so everything must have gone OK,” Hodgkins said.

Edwards remembers Savage dressed with a fringe-laden shirt. However, the attorneys have different memories whether Savage spoke in his trademark gravelly voice, or gave answers normally.

“(He had a ) very nice voice. I found it calm in the limited amount of time I was there, but that’s all it was. It’s a show. And he was very good at the show. But he was also, to me at least, he was a complete gentleman,” Hodgkins said.

Edwards agrees on how gentile Savage/Poffo was.

“What I remember most about it is, he couldn’t have been a nicer man and felt terrible about what had happened to this girl,” Edwards said.

Edwards even invited a special needs youngster to come to the deposition to meet his wrestling hero (by 1987, Savage had become a good guy). Edwards asked Savage if he would meet with the boy, despite the lawsuit.

“He must have spent 15 minutes with that guy. He couldn’t have been nicer. And it was quite a gesture,” Edwards said. 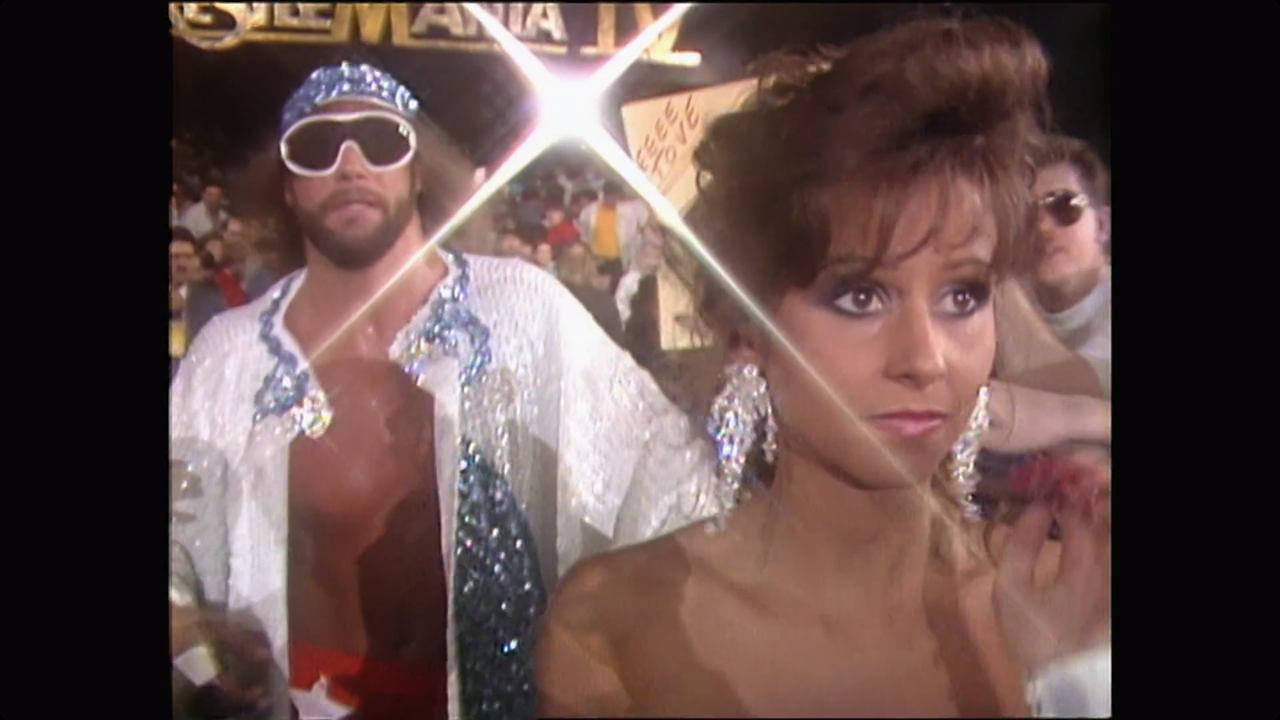 Palas remembers seeing Savage and Elizabeth again at the deposition, but her interaction was limited.

“I do remember him in full tie-dye gear… he was in full character,” Palas said.

Hodgkins recalls that Palas and her dad were happy to see Savage.

“The first thing that happened was, as I recall, her father and the girl walked up to him and asked for his autograph and he gave the autograph,” Hodgkins said.

Palas didn’t recall asking for an autograph, but was disappointed she didn’t get one thing from Macho Man.

“He never apologized to me,” Palas remembered. “I would have at least expected him to say ‘I’m sorry.’ It was all handled by the lawyers.”

The parties eventually settled for $6,000 and the suit was dismissed in 1988.

Unfortunately, Palas never saw a dime. She said her parents took out the money for a business venture that failed.

“The money was gone. That was it,” Palas said.

Palas said she never dwelt much on her incident with Savage. She eventually graduated from Fresno High School, married, and raised four children.

She still lives in Fresno and works for Verizon.

While Palas attended some matches after being punched, she was never much of a fan afterward. She tried to steer her children away.

“I never encouraged them to watch that because after that happened to me, I was like, I shouldn’t cause you guys to get wild,” Palas said. Even so, one of her sons was a big fan.

After some begging, she relented and took her sons to a local match.

Related Topics:FresnoSelland Arena
Up Next

Resnicks Give $250K To Help Newsom, but Pro-Recall Farmers ‘Afraid’ to Donate

Tower Theatre Off the Market? What’s Next for Iconic Venue.