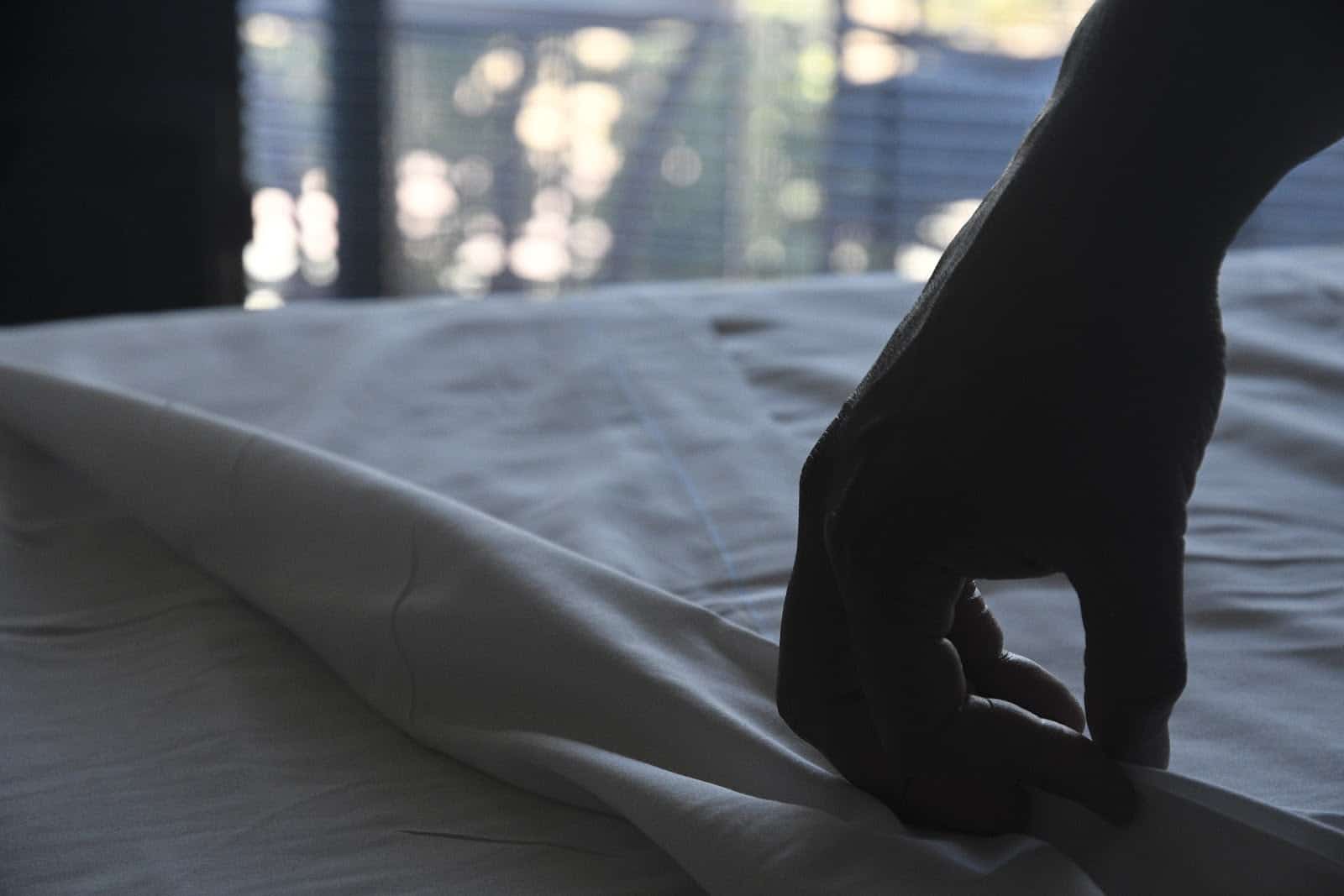 In March, John and his business partner, Dee, packed away their massage tables and locked up their office. (Both John and Dee are going by pseudonyms for fear of legal repercussions.)

After months with no income, John and Dee started home visits with trusted customers, under the table. Then, they quietly re-opened their office against local regulations, despite the potential legal or financial consequences.

“We either pay the fine or we can’t pay our mortgage,” Dee said. “That’s it.”

John and Dee are not the only small business owners to take a legitimate business underground during the pandemic. Many people say they’ve been unable to operate legally but unable to get by on government loans and stimulus checks.

However, officials say operating against the health code is not only illegal, but the business may be unknowingly spreading the virus, perpetuating the very lockdown threatening small businesses.

‘It Just Kept Me Afloat’

Lockdowns across states and counties vary.

Some county health officials told residents they should only leave their homes to shop for essential products. Others allowed for more freedom of movement and some regions had no restrictions at all.

Small businesses, like John and Dee’s, were among the hardest-hit amid these shutdowns.

Many businesses, struggling to stay afloat during the pandemic, applied for loans through the federal government’s Paycheck Protection Program, or PPP.

Research out of the University of California Santa Cruz showed that from February to April, the number of working business owners closed plummeted 22% from 15 million to 11.7 million, counting both permanent and temporary closures. The largest loss ever recorded in the U.S., it surpasses business closures from the Great Recession more than four times over. African-American, Latinx and immigrant business owners were particularly hard-hit.

A U.S. Chamber-MetLife poll of small businesses conducted in October and November showed nearly half of the respondents (48%) said they experienced lower revenue than the previous year, while exactly half (50%) said they could only stand another year or less before going under.

Lenders participating in the Small Business Administration (SBA) relief program in 2020 shelled out more than $520 billion to roughly 5.2 million companies searching for a lifeline to stave off the economic impacts of COVID-19. John adjusts the covers on his massage table. (Photo by Ayrton Ostly, The Salinas Californian)

John was among those business owners in the Bay Area region (made up of Monterey, Santa Cruz, Santa Clara, San Mateo, Alameda, Contra Costa, Marin, Sonoma, Solano and Napa counties, per California’s Blueprint for a Safer Economy) awarded a PPP loan under $150,000.

The money helped, he said, but only to catch him up. He and Dee said they each typically see 30-40 clients per week, at $100 a session.

“That amount of money came in and covered the costs of one month,” John said. “With the PPP loan, you had eight weeks that you had to use those funds for payroll and utilities… It looked like I gave myself a big raise, but it just kept me afloat for those months that I was behind.”

Only John benefitted from the loan, leaving Dee, normally the breadwinner in her household, to lean on her spouse to cover daily expenses.

The couple dipped into their savings to supplement what was still coming in. If it weren’t for her spouse’s income, Dee said, they would have had to move in with her in-laws, which was a tough idea to swallow.

“When you’re used to living by yourself, to have to count on anybody else for that kind of support, it’s hard,” she said. “It feels almost demeaning. I can’t support myself now, I can’t support us.”

‘A Hard Thing to Swallow’

Initially, John and Dee followed the state’s guidelines to the letter. They shut down their practice, went home, waited, and applied for local and federal aid.

In the summer, COVID-19 infections dipped low enough that they could re-open their doors.

They held temperature checks at the front door, used hand sanitizer, faced off with unmasked clients, and disinfected their space regularly.

They hoped those measures would keep their doors open. But soon, cases spiked in their region, and the business was shut down again.

Dee was incensed that massage is considered nonessential. She and John count first responders and medical professionals among their clientele and saw firsthand the toll the work could take on them emotionally and physically.

“If you want essential people to keep going, their bodies break down,” she said. “It’s so important to give back to these people that are essential. In order for that to happen, you need people like us to come in and work the stress, the hours upon hours of standing in front of flames (and) carrying hoses out of their body.

“When it comes down to it, I want to help the people,” Dee said. “I want to help those essential workers. Feeling like we’re at the bottom of the totem pole when we give back so much…that’s just a hard thing to swallow.”

He said there is also the mental toll of losing what he referred to as “a calling.”

Marybeth Berney is a massage therapist and president of the Washington State Massage Therapy Association. She said the pandemic thinned the ranks of massage therapists, many unable to make the numbers work.

“Lots of people chose to find other jobs, going to work for grocery stores, for example,” she said. “A lot of massage therapists still haven’t gone back to work –– for them there may be another income in the household or they chose to get a different job.”

Once John and Dee’s county issued a second round of closures, the pair decided to offer home visits. Masked, John gave adjustments in garages, backyards or living rooms, the windows remain open to keep air circulating.

He found his clientele was anxious. Many worried their neighbors would him and asked John to park where his car couldn’t be seen. Home visits dropped off by late September, and so, too, did income.

He then made the decision to go back to the office, which Dee had already done some weeks earlier.

At the time, the state dashboard shows California was confirming about 3,000 new cases of COVID-19 a day, settling out of the pandemic’s first wave and slowly climbing into its second.

In California, massage professionals certified by CAMTC “are required by law to comply with local and state regulations,” Netanel said, and are subject to disciplinary action if they are found in violation.

John and Dee are certified through CAMTC and risk having their certifications revoked entirely.

By October, indoor massage was allowed across 49 of California’s counties with a doctor’s note.

All other massages were required to take place outdoors, which Dee and John said didn’t appeal to clients because it was too chilly. They take the same precautions with customers — temperature checks, sanitizing surfaces, and require masks. A massage table at John and Dee’s practice. Photo by Ayrton Ostly, The Salinas Californian

John and Dee could even be held liable if an outbreak was tied to their establishment, Encarnación said. Insurance is unlikely to cover damages in the event that a COVID-19 outbreak was traced to a business operating outside the health code, he said.

“Now that we have the vaccine, it’s even more seditious to operate behind closed doors, he said. “Everyone needs to follow the current guidance, otherwise this does not work.”

John, though, pointed out that massage professionals can see clients indoors with a doctor’s note. What makes a few extra clients so different, he asked?

Now, in January, John and Dee see only about 12 clients a week. John applied a second time for a PPP loan, the program renewed under the Biden administration.

They do practice massage on longtime clients without a doctor’s note, he said, but they make a point to tell clients they need one in order to get a massage. About 50% show up with them, the other half, without. They can’t afford to turn down work, John said.

If things get much worse, they might have to close their doors permanently.

‘Backed Into a Corner’

Monterey County District Attorney Jeannine Pacioni said her office is sympathetic to business owners so strained they felt they had no choice but to operate in secret.

Prosecutors are required to investigate complaints, but would rather people comply with the health orders, she said.

“For some of us, who are in essential work… we’re getting our paychecks,” Pacioni said. “Our house isn’t in jeopardy from loss of a paycheck. Certain livelihoods are being lost at this point, or are already lost. I’m certainly sympathetic to their position that they can operate safely, but the reality is that they can’t.

“The health department is absolutely correct: the longer we fight against the shutdown, the longer it’s going to last.”

For businesses operating where they shouldn’t, owners face a misdemeanor, with fines of $1,000 per violation or up to a year in jail across California.

If a business is violating permitting or licensing requirements, it could fall within unfair business competition and could subject them to a civil penalty of $2,500 per violation.

They may even have their licenses revoked.

“I guess it was a concern in the beginning,” John said, shrugging. “Now it’s way on the backburner.”

A few businesses have been cited for flouting health orders in Monterey County since the start of the pandemic, but Pacioni said in her experience, business owners have been cooperative.

Yet, some feel they have no other option.

“It just really comes down to: we are just backed into a corner and need to make money,” John said. “I look at the flip side: if I was that person who didn’t work and stayed at home, I’d probably be on the streets.”

“That’s a guarantee for me,” Dee replied.

This article is part of The California Divide, a collaboration among newsrooms examining income inequity and economic survival in California.

Kate Cimini is a reporter with the Salinas Californian and CalMatters’ California Divide project. She covers economic inequality, agriculture, and housing.