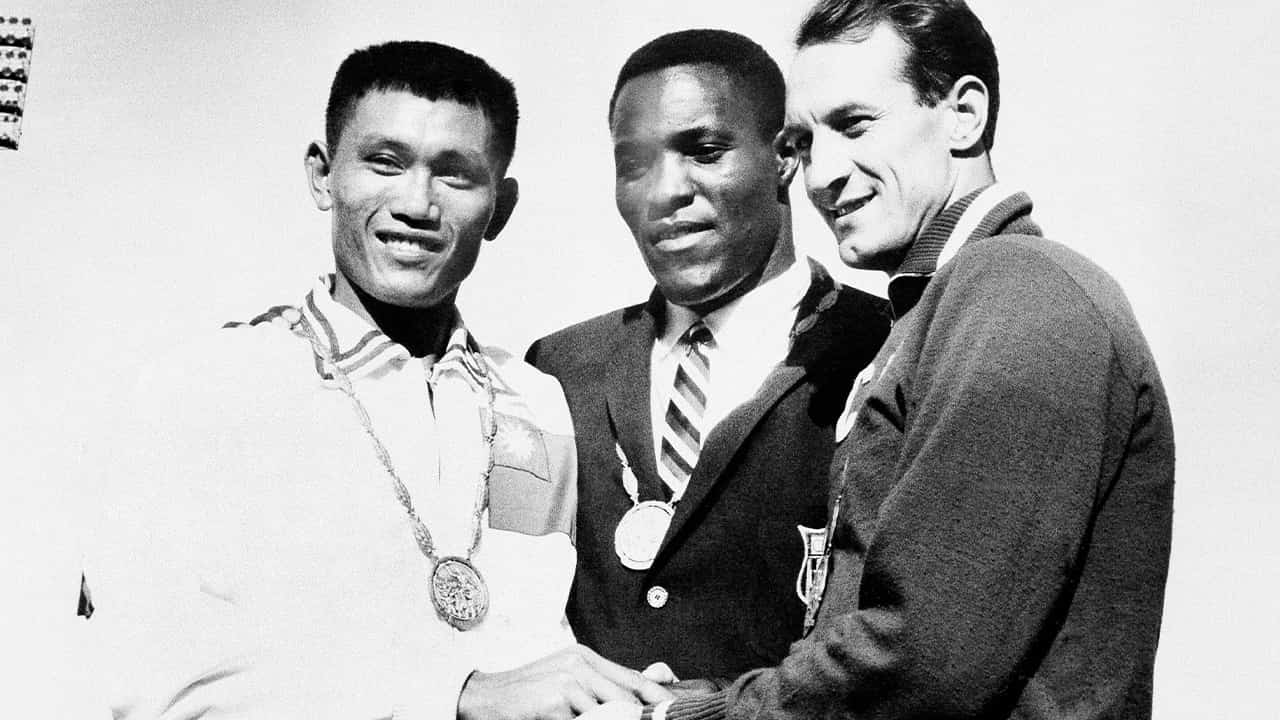 Rafer Johnson, who won the decathlon at the 1960 Rome Olympics and helped subdue Robert F. Kennedy’s assassin in 1968, died Wednesday. He was 86.

He died at his home in the Sherman Oaks section of Los Angeles, according to family friend Michael Roth. No cause of death was announced.

Johnson was among the world’s greatest athletes from 1955 through his Olympic triumph in 1960, winning a national decathlon championship in 1956 and a silver medal at the Melbourne Olympics that same year.

His Olympic career included carrying the U.S. flag at the 1960 Games and lighting the torch at the Los Angeles Memorial Coliseum to open the 1984 Games. Johnson set world records in the decathlon three different times amid a fierce rivalry with his UCLA teammate C.K. Yang of Taiwan and Vasily Kuznetsov of the former Soviet Union.

Johnson won a gold medal at the Pan American Games in 1955 while competing in just his fourth decathlon. At a welcome home meet afterward in Kingsburg, he set his first world record, breaking the mark of two-time Olympic champion and his childhood hero Bob Mathias.

On June 5, 1968, Johnson was working on Kennedy’s presidential campaign when the Democratic candidate was shot in the kitchen of the Ambassador Hotel in Los Angeles. Johnson joined former NFL star Rosey Grier and journalist George Plimpton in apprehending Sirhan Sirhan moments after he shot Kennedy, who died the next day.

“I knew he did everything he could to take care of Uncle Bobby at his most vulnerable moment,” Kennedy’s niece, Maria Shriver, said by phone. “His devotion to Uncle Bobby was pure and real. He had protected his friend. Even after Uncle Bobby’s death he stayed close.”

Johnson later called the assassination “one of the most devastating moments in my life.”

Born Rafer Lewis Johnson on Aug. 18, 1934, in Hillsboro, Texas, he moved to California in 1945 with his family, including his brother Jim, a future NFL Hall of Fame inductee. Although some sources cite Johnson’s birth year as 1935, the family has said that is incorrect.

They eventually settled in Kingsburg, near Fresno in the San Joaquin Valley. It was less than 25 miles from Tulare, the hometown of Mathias, who would win the decathlon at the 1948 and 1952 Olympics and prove an early inspiration to Johnson. FILE – In this July 20, 2015, file photo, Olympic gold medalist and philanthropist Rafer Johnson lifts his arm to mimic the lighting of the Olympic torch as he recalls the first Special Olympics World Games he attended, during a news conference in Los Angeles. Rafer Johnson, who won the decathlon at the 1960 Rome Olympics and helped subdue Robert F. Kennedy’s assassin in 1968, died Wednesday, Dec. 2, 2020. He was 86. He died at his home in the Sherman Oaks section of Los Angeles, according to family friend Michael Roth.(AP Photo/Damian Dovarganes)

Johnson Was the Favorite for the Olympics in Melbourne

During his junior year of high school, Johnson’s coach took him to Tulare to watch Mathias compete in a decathlon, an experience Johnson later said spurred him to take up the grueling 10-event sport.

As a freshman at UCLA, where he received academic and athletic scholarships, Johnson won gold at the the 1955 Pan Am Games, and set a world record of 7,985 points.

After winning the national decathlon championship in 1956, Johnson was the favorite for the Olympics in Melbourne, but pulled a stomach muscle and strained a knee while training. He was forced to withdraw from the long jump, for which he had also qualified, but tried to gut out the decathlon.

Johnson’s teammate Milt Campbell, a virtual unknown, gave the performance of his life, finishing with 7,937 points to win gold, 350 ahead of Johnson.

It was the last time Johnson would ever come in second.

Johnson, Yang, and Kuznetzov had their way with the record books between the 1956 and 1960 Olympics.

Kuznetzov, a two-time Olympic bronze medalist who the Soviets called their “man of steel,” broke Johnson’s world record in May 1958 with 8,016 points.

Later that year at a U.S.-Soviet dual meet in Moscow, Johnson beat Kuznetzov by 405 points and reclaimed the world record with 8,302 points. Johnson won over the Soviet audience with his gutsy performance in front of what had been a hostile crowd.

A car accident and subsequent back injury kept Johnson out of competition during 1959, but he was healthy again for the Olympics in 1960.

Yang was his primary competition in Rome. Yang won six of the first nine events, but Johnson led by 66 points going into the 1,500 meters, the decathlon’s final event.

Johnson had to finish within 10 seconds of Yang, which was no small feat as Yang was much stronger running at distance than Johnson.

At UCLA, Johnson played basketball for coach John Wooden, becoming a starter on the 1958-59 team. In 1958, he was elected student body president, the third Black to hold the office in school history.

“He stood for what he believed in and he did it in a very classy way with grace and dignity,” Olympic champion swimmer Janet Evans said by phone.

Evans last saw Johnson, who attended her 2004 wedding, at a luncheon in his honor in May 2019.

“We were all there to fete him and he just didn’t want to be in the spotlight,” she said. “That was one of the things I loved about him. He didn’t want credit.”

Johnson retired from competition after the Rome Olympics. He began acting in movies, including appearances in “Wild in the Country” with Elvis Presley, “None But the Brave” with Frank Sinatra and the 1989 James Bond film “License to Kill.” He worked briefly as a TV sportscaster before becoming a vice president at Continental Telephone in 1971.

Throughout His Life, Johnson Was Widely Known for His Humanitarian Efforts

In 1984 Johnson lit the Olympic flame for the Los Angeles Games. He took the torch from Gina Hemphill, granddaughter of Olympic great Jesse Owens, who ran it into the Coliseum.

“Standing there and looking out, I remember thinking ‘I wish I had a camera,’” Johnson said. “My hair was standing straight up on my arm. Words really seem inadequate.”

Throughout his life, Johnson was widely known for his humanitarian efforts.

He served on the organizing committee of the first Special Olympics in Chicago in 1968, working with founder Eunice Kennedy Shriver. Johnson founded California Special Olympics the following year at a time when positive role models for the intellectually and physically disabled were rare.

“Rafer really paved the path for many of us to understand the responsibilities that come with being a successful athlete and the number of lives you can impact and change,” Evans said.

Maria Shriver recalled meeting Johnson for the first time at age 10 or 11 through her mother Eunice.

“He and I joked that I’ve been in love with him ever since,” she said. “He really was an extraordinary man, such a loving, gracious, elegant, humble man who handled his success in such a beautiful way and stayed so true to himself throughout his life.”

Peter Ueberroth, who chose Johnson to light the Olympic torch in 1984, called him “just one great person, a marvelous human being.”

Johnson worked for the Peace Corps, March of Dimes, Muscular Dystrophy Association and American Red Cross. In 2016, he received the UCLA Medal, the university’s highest award for extraordinary accomplishments. The school’s track is named for Johnson and his wife Betsy.

His children, Jenny Johnson Jordan and Josh Johnson, were athletes themselves. Jenny was a beach volleyball player who competed in the 2000 Sydney Olympics and is on the coaching staff of UCLA’s beach volleyball team. Josh competed in javelin at UCLA, where he was an All-American.

Besides his wife of 49 years and children, he is survived by son-in-law Kevin Jordan and four grandchildren.

Related Topics:OlympicsRafer Johnson
Up Next