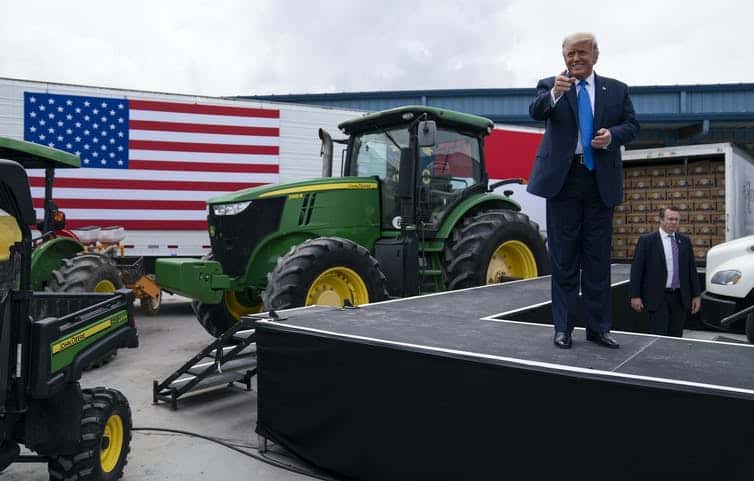 By Wendong Zhang and Minghao Li

U.S. farmers have suffered a lot in the past few years: The trade war with China, natural disasters and the COVID-19 pandemic have all resulted in substantial losses for many producers.

Farmers overwhelmingly supported Donald Trump in 2016 and remain critical to his reelection in many swing states such as Iowa and Minnesota. But given the impact of all that’s happened, will they stick with the president in the November elections?

While the economic costs have been steep, Trump has found a way to make it up to them: record subsidies. And that’s why we believe most U.S. farmers will stay loyal to Trump.

The trade war with China, which began in 2018, has dealt a major blow to U.S. agricultural exports.

After over a year of escalation, by the fall of 2019 retaliatory tariffs by China had covered virtually all U.S. agricultural products. As a result, exports of key goods such as soybeans experienced steep declines, resulting in losses to U.S. soybean farmers of over US$10 billion, according to our calculations.

The pain was spread across the U.S., if unevenly. California’s state economy, for example, has suffered the most, losing over $6 billion. Still, most states saw hundreds of millions of dollars in losses, and 11 experienced losses of more than $1 billion.

Federal Subsidies to the Rescue

In 2018, the Trump administration created a subsidy program intended to mitigate farmers’ losses related to the trade war. Breaking from tradition, the administration let the U.S. Department of Agriculture spend the money without first getting approval from Congress.

Under the program, farmers and ranchers received $8.5 billion for 2018 losses and $14.3 billion for 2019. No trade-related subsidies have been distributed for 2020 except for the remaining third tranche of the 2019 payments.

But just as some states were hurt more by the trade war than others, not all states benefited equally from the payments. The subsidies heavily targeted the Midwest, reflecting the political influence of rural constituents in these states. Most of the states that came out ahead – such as Iowa and Nebraska – tend to vote Republican and have relatively large agricultural sectors.

As Trump put it during a recent rally in Iowa, “Some of the farmers were making more money the way I was doing it than working their asses off, all right? They were very, very happy.”

Since the costs of the program are financed by all taxpayers, states with large urban populations such as California, Texas and New York are footing the bill – and spending more money than they are getting in support. California farmers, for example, received just $106 million in payments – despite the $6 billion in losses – even as the state’s taxpayers contributed $2 billion to the program.

Unfortunately for farmers, just as the U.S. and China were reaching a truce in their trade war, the coronavirus recession saddled them with another source of deep economic pain.

While the economic toll from the virus remains unknown, the closures of schools, restaurants and other businesses cut into food sales and further depressed markets for crop and livestock farmers across the United States. In 2020, even with federal aid, Midwest corn and soybean farmers are expected to lose money.

Working with Congress this time, the Trump administration created another program to help farmers hurt by the coronavirus pandemic and has so far disbursed almost $30 billion. Again, a large chunk of the payments have gone to red Midwestern states such as Iowa, which alone received almost $1 billion of the first $10.2 billion disbursed.

Payments have been accelerating as Election Day approaches. Combined with trade-related and pre-Trump subsidies, total payments this year are expected to reach a record $46 billion.

While the payments are meant to provide short-term relief, the trade war may already have done long-term damage to American farmers. The tariffs on U.S. agricultural products led Chinese companies to seek out cheaper sources for food and feed. Brazilian farmers sold record amounts of soybeans to China in May and June and are now enjoying their highest profits from the crop in history. So what does this all mean for how Trump will fare with farmers in November?

Two recent studies show that Republican candidates lost support in the 2018 congressional elections in counties more exposed to trade retaliation, as well as in counties with more soybean production. And certainly, not all farmers are happy with Trump. One Ohio farmer who voted for Trump in 2016 lamented in a news article that the president “always does the same. He hurts you and then he gives you money to keep you quiet.”

[Get our best science, health and technology stories. Sign up for The Conversation’s science newsletter.]

Yet the generous farmer subsidies are one reason farmers have said they support Trump’s trade war. Last fall, our survey of Midwest crop farmers found that 56% said they somewhat or strongly support Trump’s tariffs on Chinese products, despite retaliation on their own exports. Farmers also said they share concerns held by many Americans of the broader perceived threat of China over issues like the trade deficit and cyber espionage.

And several recent polls show that farmers’ overall support for the president remains strong. Eighty-two percent of farmers polled by the Farm Journal in August said they planned to vote for Trump. A survey of large-scale farmers in July found that 75% would back the president, about the same as in 2016.

While the trade war’s impact on the election remains unclear, there is no reason to expect a substantial portion of farmers to defect from the president.

Is the Clovis City Council’s Proclamation to End Racism Enough?