String Musicians Lose Their Home to Creek Fire, Leaving Them Bowed but Unbroken 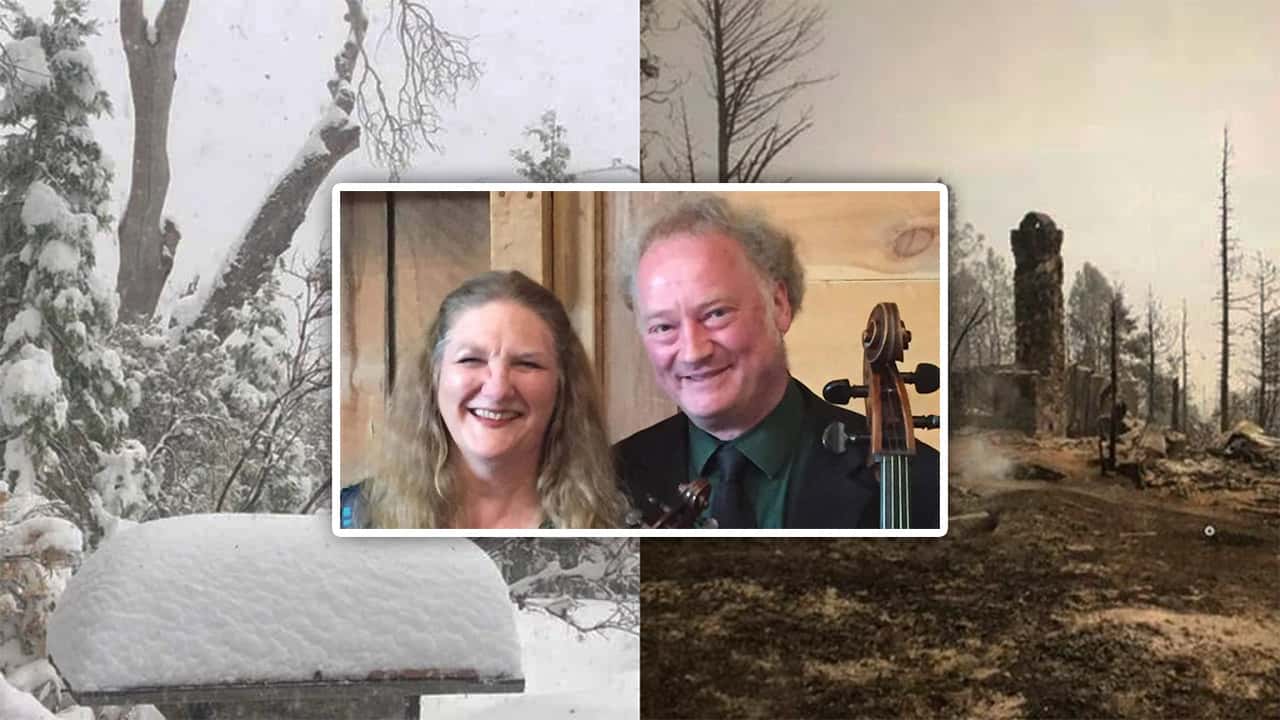 Dieter Wulfhorst and Susan Doering were spending three to five hours each day over the summer, clearing out the dead wood and forest debris around their Bald Mountain Road home.

After all, they had plenty of time on their hands. Wulfhorst, a cellist, and his violinist wife normally would have been on the go, traveling to Europe and around the U.S. to perform individually and together as the Emerald Duo (emerald being the birthstone of May, the month they both were born), and to teach master classes.

When they’re home, they’d perform with symphonies and orchestras up and down the Valley, including the Fresno Philharmonic, and have taught at Fresno State and Fresno Pacific.

But the COVID-19 pandemic cancelled their performances and travel, and kept them close to their Mile High neighborhood home tucked between Auberry and Pine Ridge on the north side of Highway 168.

From the birds that landed on tree branches around their home to the critters that crept up to snack on undergrowth and peek at them, Wulfhorst said, he and Doering were enjoying their mountain aerie while practicing music and preparing for concerts yet to come.

“Everything from bears to chipmunks, mountain lions, foxes, hawks and skunks, we loved being a part of nature,” Wulfhorst told GV Wire℠. “We were loving the opportunity to live in nature.”

But their pastoral peace was shattered on Sept. 6 when the rapidly expanding Creek Fire targeted their neighborhood.

The initial evacuation warning came at 10 a.m. When the mandatory evacuation order came through at 4 p.m., Wulfhorst and Doering still had time to collect some of the things most valuable to them — his cello, made in 1693 by Giovanni Battista Rogeri, her collection of antique bows dating to the 19th century and her violin, their passports and other important documents, some irreplaceable sheet music and some photographs, and their formerly feral housecat, Charlie — and load up their cars before heading down the hill.

Wulfhorst said that in their 19 years in the woods, “we are always ready to evacuate.”

Within a few days they were invited to stay at a musician friend’s farm in Clovis while they waited to learn the fate of their home. Wulfhorst had been watching the fire’s progress when it broke out Sept. 4 near Big Creek and thought it might come up Bald Mountain Road.

Instead, it swept from Alder Springs through thickly wooded forest land and came up the back side. Two homes were lost to the flames — Wulfhorst and Doering’s, and a neighbor’s.

When the fire’s fury exploded that Sunday, the smoke was so thick that air tankers which might have helped save the Bald Mountain Road homes and others were grounded. Wulfhorst said he wonders why tanker pilots could not use the same night vision goggles that allowed National Guard pilots to land in thick smoke and rescue campers at Mammoth Pool and other campgrounds.

But he knows it could have been even worse for them. What if there was no COVID-19, and they had been traveling when the fire struck? One of his neighbors was on a hiking trip when he learned of the Creek Fire, and could not return in time to retrieve anything before fire consumed his home, Wulfhorst said.

He also counts himself and Doering as lucky to have kind friends with a spare house on their farm so they can remain safe from COVID-19 concerns while they figure out what to do next. He’s not worried about having a new home someday — their insurance policy will cover rebuilding or buying another.

As to where they will wind up — Wulfhorst said it’s too soon to say.

“The beautiful forest we had, there will be no trees left,” he said sadly. “It’s like a moonscape.”

Donations for Creek Fire victims can be made to the Granville Homes Creek Fire Relief Fund, with proceeds being provided to the American Red Cross of Central California.