The number of child predators in the Central Valley is staggering.

That’s the takeaway from Friday’s announcement that 34 men have been arrested and booked into Fresno County Jail on charges related to arranging to meet with a child for sex.

Those arrested are between 19 and 63 years old.

Thus far in 2020, the Central California Internet Crimes Against Children Task Force has made more than 90 arrests related to the distribution and possession of child pornography, including images of children being raped. That is nearly twice the total of similar arrests made for all of 2019, Fresno County Sheriff’s Office spokesman Tony Botti said in a news release.

The arrests resulted from the “COVID Chat Down” joint task force undercover operation conducted July 20 to Aug. 2, according to the sheriff’s office.

Notable was the arrest of registered sex offender Thomas Binford, 55, of Clovis. In addition to his arrest for trying to meet a child for sex, Binford possessed child pornography that included images of infant bondage and rape, detectives said.

In making the arrests, Botti said, detectives posed as 12- and 13 -year-old boys and girls and talked to men via online apps. During their conversations, the suspects used sexually explicit language and sent graphic photos to detectives posing as children. Once a suspect requested to meet with a child, detectives arrived at a predetermined location and made an arrest.

No children were used or placed into danger, Botti said. 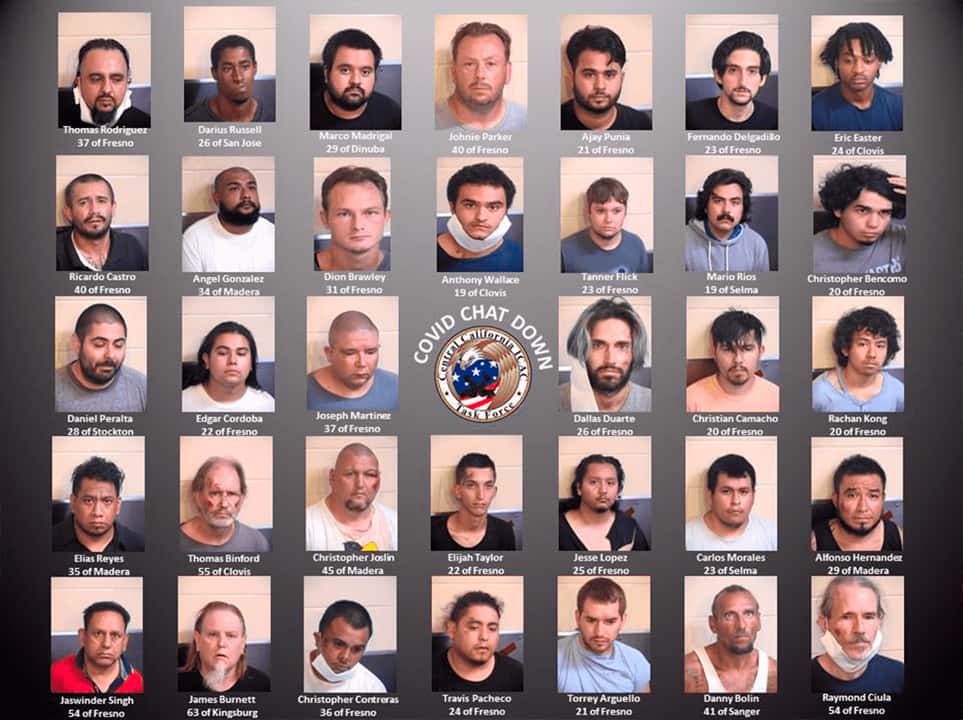 During the COVID-19 pandemic, children are using social media sites more because of school closures and fewer extra-curricular activities, Botti said. A potential danger of being online more is an encounter with a sexual predator seeking out and grooming children.

Experts advise parents to monitor their children’s internet and app usage.  Talking openly and frequently is a good way for parents to build trust with their children. Parents should also teach children to be wary of the person on the other end of a chat line.

Parents should immediately report suspicious behavior to law enforcement or file a cyber tip to the National Center for Missing & Exploited Children at https://report.cybertip.org/.

Do You Have a Tip for Law Enforcement?

Operation “COVID Chat Down” is an ongoing investigation. Anyone with information about the suspects is asked to speak to Sgt. Chad Stokes at (559) 600-8144, Valley Crime Stoppers at (559) 498-7867  or www.valleycrimestoppers.org. You will remain anonymous and may be eligible for a cash reward.