A Central High School teacher is on paid administrative leave after allegations arose on social media that he targeted female students for inappropriate sexual conversations and suggestions.

Central and Clovis unified school district spokeswomen say the districts are cooperating with law enforcement officials who are investigating the allegations made against teacher Lou Standifer.

Attempts by GV Wire℠ to reach Standifer have been unsuccessful.

“Student safety is a top priority for the district and as such, we are fully cooperating with law enforcement and will continue to do so throughout the course of its investigation,” said Central Unified spokeswoman Sonja Dosti, who confirmed that Standifer was put on administrative leave.

Standifer was employed by Clovis Unified from 2008 to 2016 as a full-time teacher and then as an occasional substitute until 2018, district spokeswoman Kelly Avants said.

“We, too, saw the posts surface on social media and have already begun to partner with law enforcement to assist fully their investigation into the allegations in those social media posts,” she said.

Fresno Police Sgt. Daniel Macias said a patrol officer took a report last week of allegations made against Standifer, and the report is under investigation by a Sexual Assault Unit detective.

A Twitter user with the moniker handle Lysarian Creations has posted a number of tweets urging girls or women who feel they were victimized by Standifer to speak out. 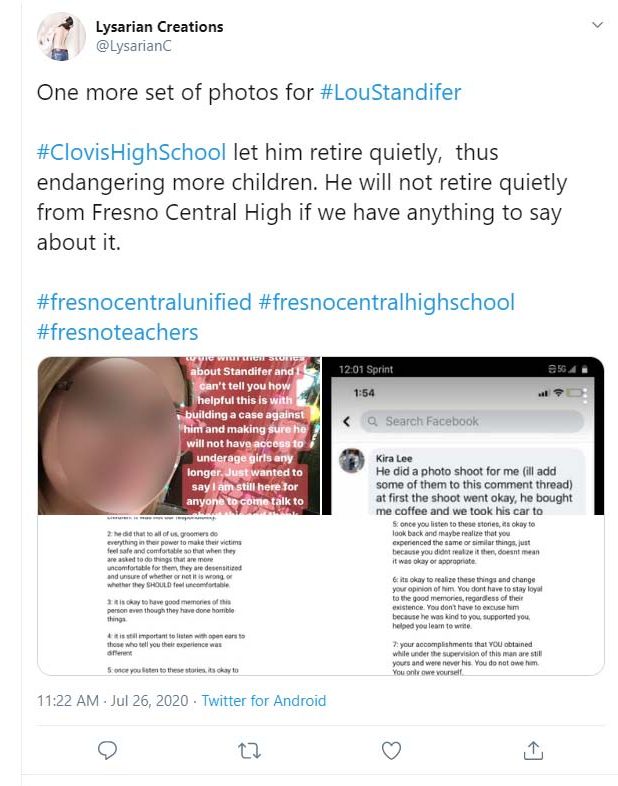 The poster said he is a 33-year-old photographer and artist who was once hired by Standifer to shoot a celebration of life event, and who became friends with several young women who later shared their stories about Standifer with him. He said he decided to make the allegations public “because I hate bullies and it’s the right thing to do.”

In a separate tweeted image, the young woman said the incident happened in 2015, but she hadn’t spoken out about it until recently.

“But now that I know he is a teacher at Central High I feel the need to share what happened to me so no other children get put in this same position or worse,” she wrote. “I was 17. He was friends with my dad. I looked up to him. This is never okay.”

In another tweet, a young woman said she was five months past her 18th birthday when Standifer drove her to downtown Fresno for a photoshoot. She said he tried to “help” her as she changed outfits in the car and told her she didn’t need to wear underwear because “a girl your age should have fun being risky.”

She said she blocked his subsequent attempts to contact her.

According to a Central Unified agenda report, Standifer was one of three chaperones on a three-day field trip to Monterey for the Black Students of California United annual conference in March 2019.