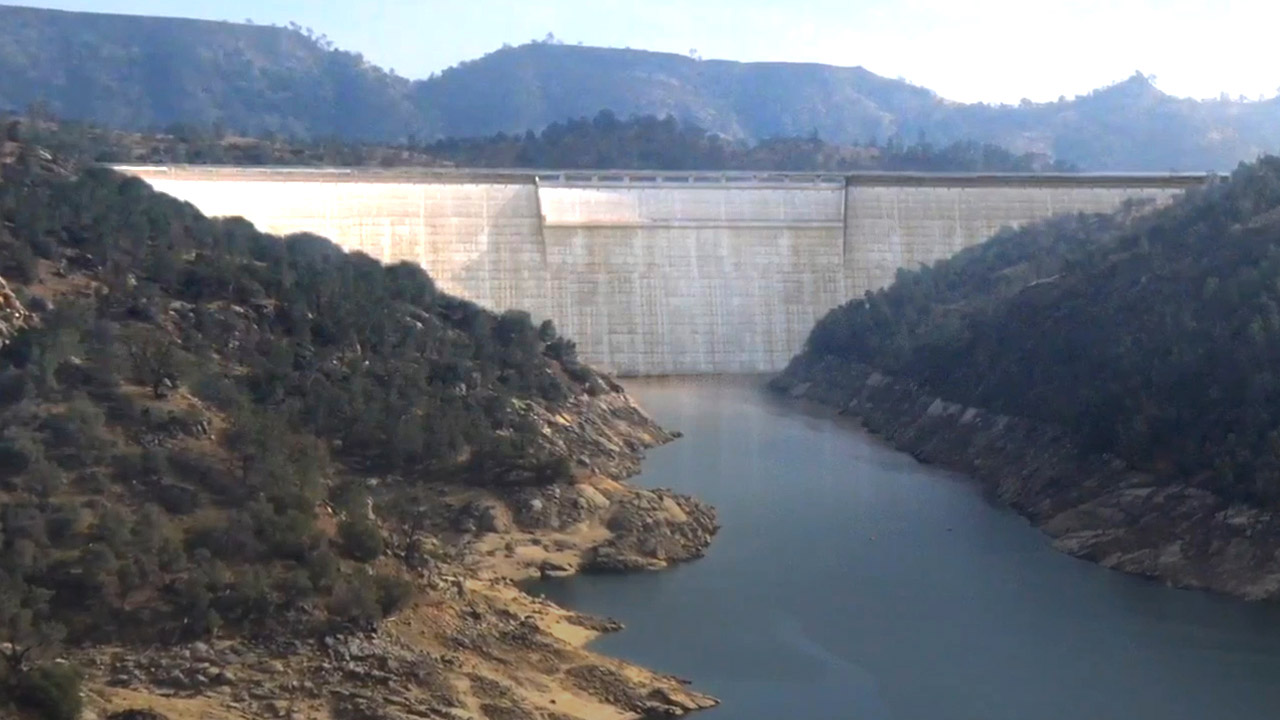 An investment analysis that looked at how much it would cost water users to build and operate the proposed Temperance Flat Dam northeast of Fresno without government funding was finished earlier this year and quietly passed among water districts, which just as quietly asked the federal government to shelve work on the project.

A small group, made up of agricultural water districts and some cities, was assembled by the Temperance Flat Authority to participate in the investment analysis done by Stantec.

The group has still not made the analysis public as it was purposely kept in “draft” form exempting it from disclosure under the California Public Records Act.

SJV Water, however, obtained a copy.

The basic storage costs were staggering, according to the analysis.

If users simply stored their share of high-flow San Joaquin River behind the dam, it would cost them about $9,000 an acre-foot during the 50-year capital cost repayment period, dropping to $7,000 per acre-foot after repayment.

The analysis also allowed users to see what the costs would be if they used their storage account to exchange and transfer water, which brought costs down, in some cases to around $300 an acre-foot during repayment, which is still high for many farmers.

Though as the Sustainable Groundwater Management Act limits groundwater pumping and farmers face the specter of fallowing possibly hundreds of thousands of acres across the Central Valley, that could be dirt cheap in the future.

But for now, Temperance Flat water was too pricey and there are too many other pressing issues for most ag districts involved in the analysis.

So, Temperance Flat is, once again, on indefinite hold.

The group has still not made the analysis public as it was purposely kept in “draft” form exempting it from disclosure under the California Public Records Act.

While no one is openly calling the analysis a death knell for Temperance Flat, its findings prompted the Temperance Flat Reservoir Authority to ask the Bureau of Reclamation to defer a planned feasibility study of the project for the next three to five years. 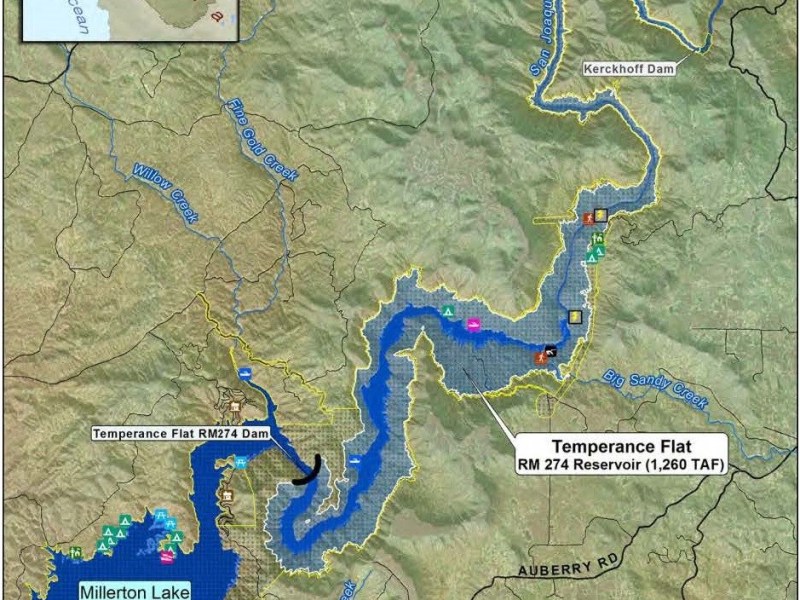 Yes, Fukuda said, the analysis shows that using Temperance Flat as a traditional storage reservoir would be outrageously expensive.

But when you “manage” that water — moving it to recharge basins, using it in exchanges and transfers up and down the state — the price starts to come down, he said.

“When you just take the inflow that was originally envisioned for Temperance Flat, that really wet year high-flow water, and put it behind a dam, that doesn’t generate a huge amount of water,” Fukuda said. “You have to think about how to use the reservoir when it’s not a high-flow year, that’s what can drive the costs down. The trick to Temperance Flat is not to use it for traditional storage and carry water over season to season but to exercise that storage space.”

That could involve a number of different scenarios, which the investment analysis looked at, including exchanges for excess water from the Sacramento-San Joaquin Delta; having a large outside municipal water user such as Metropolitan Water District of Southern California participate; and various increases to a trans-valley canal.

For the Tulare Irrigation District, Fukuda said, they were able to bring their investment cost down to $500 an acre-foot by using the storage to “time shift” water.

For example, he said, Tulare Irrigation gets water off the Kaweah River. Say one spring, it’s flooding with more water than Tulare Irrigation can absorb but Arvin-Edison Water Storage District can use 100 CFS (cubic feet per second).

That would give users year-round water options.

“These were very complicated exercises that showed a benefit (to investing in Temperance Flat),” Fukuda said. “But we couldn’t finalize those exercises into an operational plan just yet. What was being analyzed in the Bureau’s feasibility report didn’t match our modeling so we asked for that to be deferred until we have an operational plan that looks at how we could use and exchange that water more creatively.”

He wasn’t sure when an operational plan would be completed.

“We are in a holding pattern,” said Mike Carbajal, director of Fresno Public Utilities. 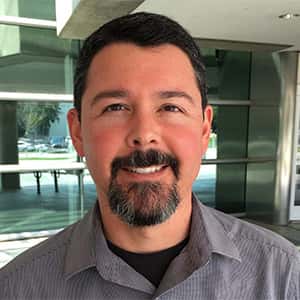 “We can’t say if it’s a good project or not. But we have an obligation to look at it.” — Mike Carbajal, director of Fresno Public Utilities

Those initial costs may seem high, Carbajal said, but cities have a larger pool of ratepayers to spread out costs and a longer planning horizon than ag.

“We’re living with water infrastructure that was built based on decisions made 50 years ago, so that’s the perspective we bring to these issues,” Carbajal said.

He noted that the city of Clovis approved a contract with the Fresno Irrigation District last year to pay $35 million, or $5,000 an acre-foot for 7,000 acre-feet, over 25 years.

“We can’t say if it’s a good project or not. But we have an obligation to look at it,” Carbajal said.

Optimism is running somewhat lower among ag districts that participated in the investment analysis.

“There was some value in the project but there are other things that need to be completed first,” said Chris White, executive director of the San Joaquin Valley Exchange Contractors, a group of water districts that stretches between Mendota and Newman east of Interstate 5.

Other projects taking priority include the Friant-Kern Canal, which has a number of issues, including a 33-mile long “sag” from Pixley south that was caused by massive over pumping near the canal.

That sag has reduced the canal’s carrying capacity by 60 percent.

Without a fully operational Friant-Kern Canal, a lot of the water management scenarios in the investment analysis wouldn’t be possible.

The analysis also didn’t include possible litigation costs from environmental groups that have consistently opposed Temperance Flat as too costly for too little benefit on a river that they say is already oversubscribed.

If the sag can be fixed, along with a “choke point” at its confluence with the Kings River, there may not be a need for Temperance Flat, said Dana Munn, general manager of the Shafter-Wasco Irrigation District.

If the greater benefit of Temperance Flat isn’t traditional storage but in facilitating water movement, he said the same thing can be achieved by simply fixing the Friant-Kern Canal, and encouraging users to maximize recharge.

“We could pull a lot more water off that system,” Munn said.

He declared the project “potentially dead.”

“It doesn’t appear the forward momentum is there at this point,” he said.

Delano-Earlimart and Shafter-Wasco participated in the investment analysis as a joint stakeholder.

Delano-Earlimart got its costs down pretty low at between $331 and $423 per acre-foot during the repayment period and $45 to $59 per acre-foot after repayment.

Aside from the money, there are trust issues that would need to be worked out, some water users said.

Bitter feelings, and an ongoing lawsuit, still linger over the Bureau of Reclamation’s interpretation of Friant water contracts during the 2012-2016 drought.

Considering that giant Westlands Water District has already announced it will petition the state for a share of San Joaquin River flood flows, there may be little enthusiasm for creating a bigger pot to target.

The Bureau gave what little water was in Millerton Lake to the San Joaquin River Exchange Contractors in 2014 and 2015 while Friant contractors got nothing for the first time since the project was built in the 1930s.

If there was more San Joaquin River stored behind Millerton, some wondered, how would the Bureau interpret its ownership?

Fukuda was confident existing rights would extend to that new water.

Others weren’t so sure.

And it didn’t escape notice that the investment analysis included water districts from the valley’s west side.

“There’s always a sense of potential trepidation as you link in other portions of the state or federal projects with the Friant Division without a clear understanding of the fundamental bookends of those interactions,” Quinley said.

Considering that giant Westlands Water District has already announced it will petition the state for a share of San Joaquin River flood flows, there may be little enthusiasm for creating a bigger pot to target.

Facebook Bans Violent 'Boogaloo' Groups, Not the Term Itself