“The whole city is on high alert,” said Fresno Police Sgt. Jeff La Blue Monday after a break-in and vandalism at Fig Garden Village. “We definitely have more officers on the street.”

Around 11:25 p.m. Sunday, police received a call about 15 vehicles circling the northwest Fresno shopping center in a suspicious manner. Officers in the area were on scene within a minute, La Blue said.

While checking the area, officers saw broken glass in front of The Vault Fine Jewelers store.

Officers located some of the stolen jewelry in the parking lot and returned it to the business owner.

Some physical evidence was left at the scene. Police are reviewing surveillance video to see if that can help determine who is responsible.

Police say approximately $300,000 worth of jewelry was taken.

“I believe that being in the right place at the right time, saved us in this situation from possibly having more damage or more theft,” said La Blue, who is the department’s public information officer.

A break-in at the Clovis Target at Shaw and Clovis avenues had a similar number of vehicles around the business, security footage shows. But there is no confirmation they are the same suspects.

At about the same time as the burglary at The Vault, a break-in at the CVS pharmacy next door was called into police.

Officers checked and found about a 5-inch hole in the front door. Police reviewed security footage that showed two suspects wearing hoods, masks, and latex gloves. The video shows that the suspects used a hammer to break the glass on the front door.

No one made entry into the CVS. Police are investigating this case as vandalism, and believe it’s likely related to the jewelry store burglary. 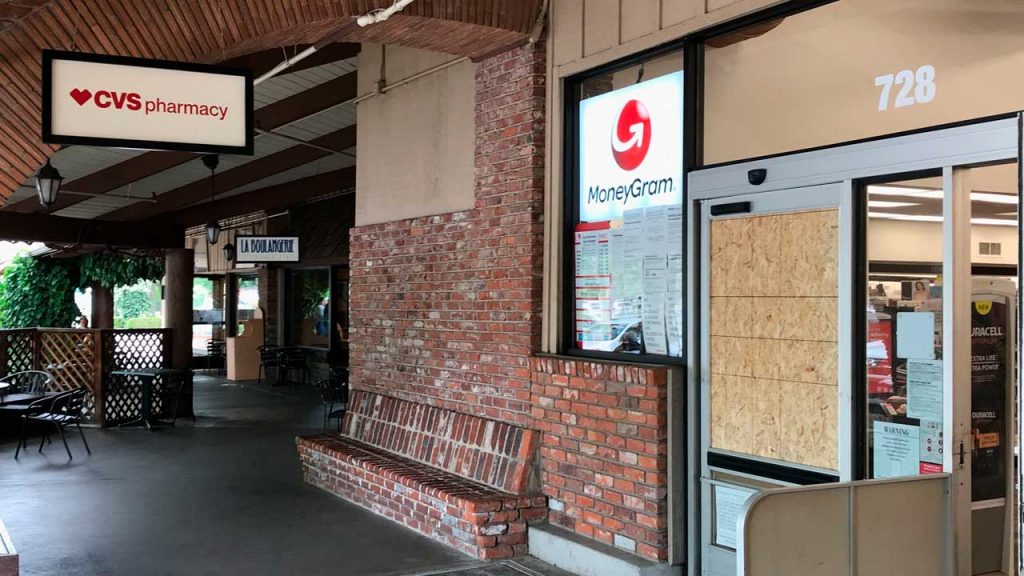 CVS Pharmacy in Fig Garden Village damaged by vandals Sunday night. Police say no one made it inside after front door glass was broken. (GV Wire/Jim Jakobs)

Sgt. La Blue says these incidents are not considered looting — at least for now.

“A lot of that will come from the suspects when we speak to them, if it does change from a burglary to a political statement,” La Blue said.

“We’re monitoring social media and we’re paying attention to any rumor that starts up.”

As to whether either of the two incidents at Fig Garden Village would fall under the state’s $0 bail policy, La Blue said that it’s likely.

“There’s a chance that it (jewelry store break-in) falls under the $0 bail because it is a burglary,” he said. “The CVS is vandalism so that certainly would fall under a $0 bail.”

La Blue said that police chief Andy Hall understands the frustrations of residents after the death of George Floyd in Minneapolis.

“The answer is us working together. The answer is us communicating,” La Blue said. “Meeting and talking like the demonstration we had here in front of Police Headquarters Sunday, that did more for the solution of the problem than anything else that we have seen.”