LOS ANGELES — The Los Angeles Rams unveiled new uniforms Wednesday, putting a modern aesthetic on their classic horned helmets and traditional color scheme ahead of their move into SoFi Stadium this year.

Two of the Rams’ three new looks are broadly similar to their primary royal-blue-and-yellow uniform from 1973-99. But there are several surprising touches added to an overall look that’s still wildly popular with California fans who stayed loyal to the franchise during its 21-year sojourn in St. Louis.

The Rams have added distinct creases to the horn on their famous blue helmets, which now have a metallic sheen. The horns circling the shoulders of their royal-blue jerseys also have the crease, echoing the style of the new team logos unveiled earlier in the spring.

The Rams took an even bigger risk with their white uniform, choosing an off-white color dubbed Bone that’s sure to be hotly debated.

The franchise has planned a new look since its return to Los Angeles in 2016. The changes were timed to coincide with the planned opening of owner Stan Kroenke’s multibillion-dollar arena in Inglewood this fall.

“This is going to be an amazing, iconic, modern building,” Rams chief operating officer Kevin Demoff said. “You wanted the uniforms to match the style and design of the building, but still have the tradition and some elements that our fans had come to know and love.” 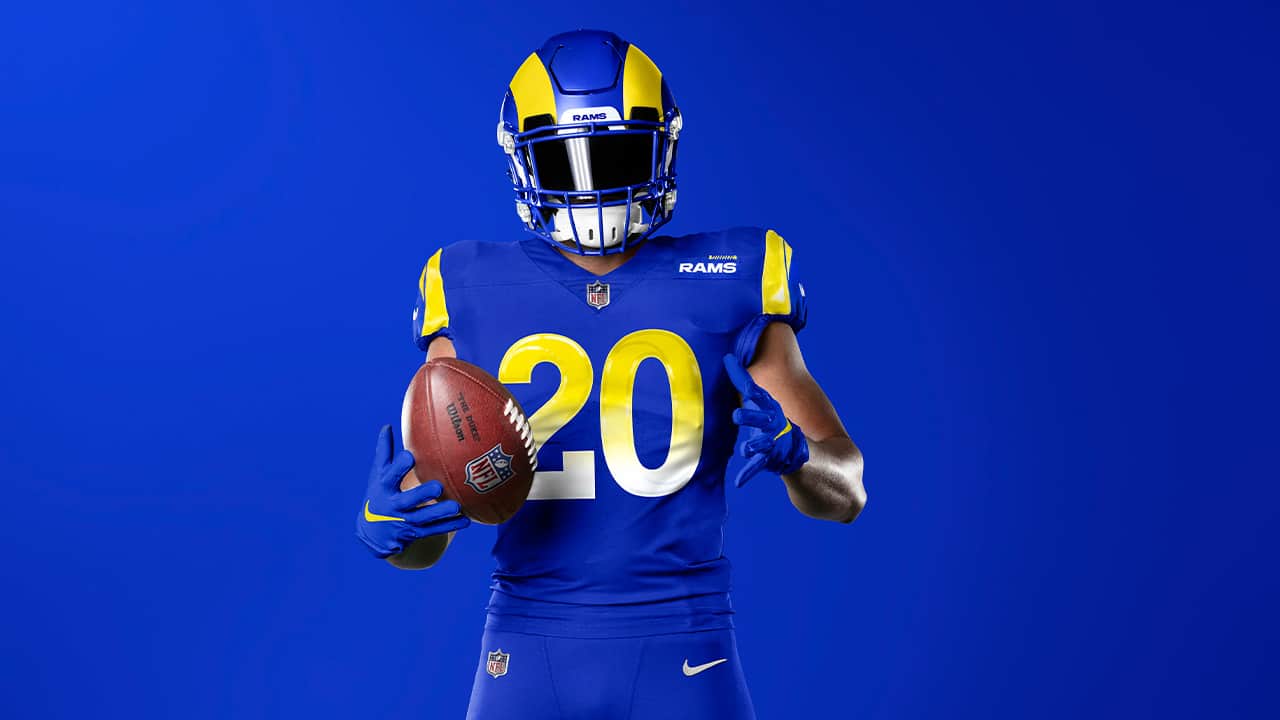 This undated graphic image released by the Los Angeles Rams NFL football team shows a model in their ‘royal’ uniform color scheme. The Rams have unveiled new uniforms ahead of their move into SoFi Stadium this year. (Los Angeles Rams via AP)

The Rams will wear yellow or blue pants below the same blue jersey. They slightly shrunk the horns traditionally wrapping around the blue jersey’s shoulders. They also changed the look of their yellow uniform numbers, altering their shape and adding a yellow-to-white color gradient similar to the much-debated technique used in their new logos.

A league exception allows a color other than stark white in their Bone uniforms, which are minimalist aside from a small yellow stripe on the pants. The numbers are blue, and the shoulder horn is even smaller.

“The blue uniform, while you have the progressive elements, is still much more of the traditional look modernized,” Demoff said. “We felt there was more creative opportunity with the second uniform to make changes. While there were different white jerseys throughout time for the Los Angeles Rams, we didn’t think that the attachment to them from a fan perspective was as strong.”

The first team in football history to put logos on their helmets — fullback Fred Gehrke painted horns on his team’s leather headgear in 1948 — the new Rams will wear only blue helmets and one style of horns. They alternated between white and yellow horn decals last season.

Receiver Robert Woods said he was “super surprised” by the new look for many reasons, including the color-gradient uniform numbers that reminded him of recent Pro Bowl jerseys.

“I was like, ’Oh wow, they went super modern, super futuristic,’” Woods said. “It was something that I couldn’t even picture, with the helmet being that color, and the Bone jerseys. I just thought it was super creative, different than what’s been done before, and really fitting for our new stadium. The blue, just seeing it in that new stadium, just gives good vibes.” 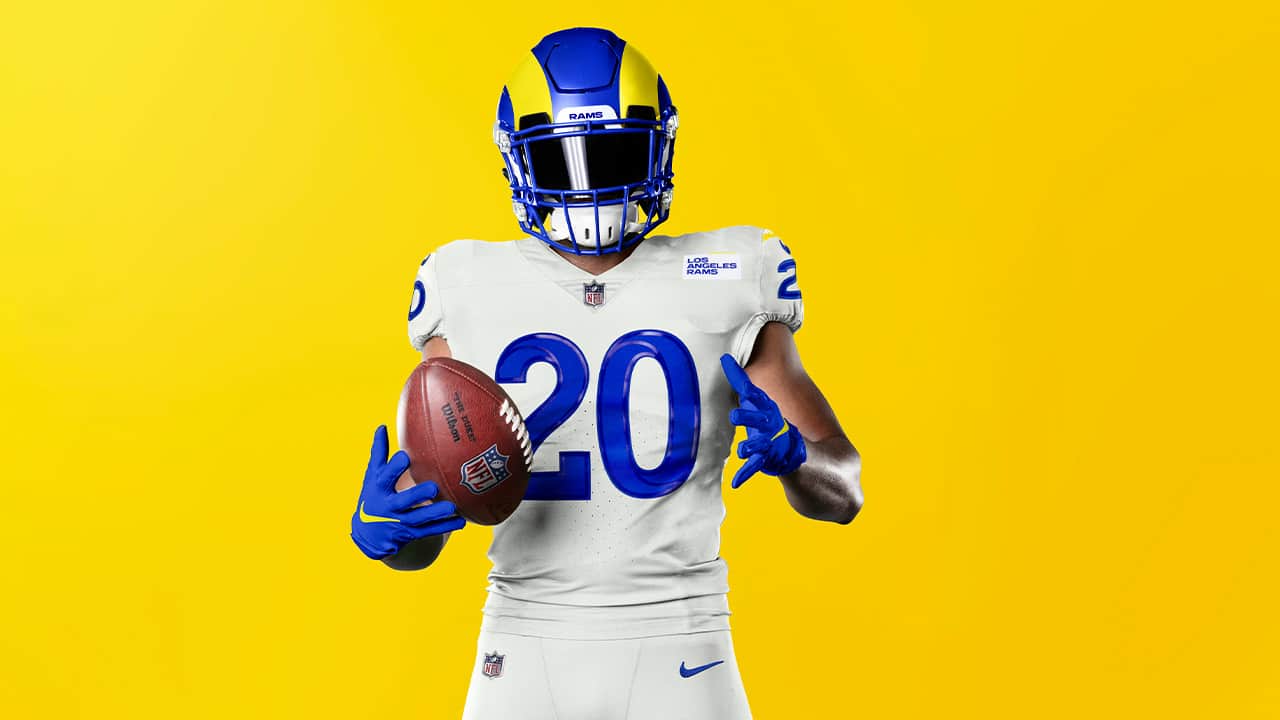 This undated graphic image released by the Los Angeles Rams NFL football team shows a model in their ‘bone’ uniform color scheme. The Rams have unveiled new uniforms ahead of their move into SoFi Stadium this year. (Los Angeles Rams via AP)

Rams cornerback Troy Hill even compares the uniforms’ audacity to the fashion-forward mentality at the University of Oregon, his alma mater.

“I’m thinking about all the ways we can mix and match these uniforms,” Hill said. “Just the Bone, that’s kind of innovative. I feel like we’re the Oregon of the league now.”

The uniforms were the last, biggest part of the Rams’ offseason rebranding. Although the changes happened with less fanfare than the Rams had hoped thanks to the coronavirus pandemic, the franchise remained confident in its decision to change its look while attempting to sell season tickets in the new arena.

The Rams unveiled their new logos, primary colors and wordmarks earlier in the offseason to mixed response. Most fans have been slow to warm to the new “LA” logo with a ram’s horn curled around the letters. The reception for the updated ram’s head logo has been more positive.

“Jerseys and logos in sports become iconic because of what players do in them, not because of the designs,” Demoff said. “We’re really excited to see it come to life. Bringing a brand change and a design change to life during a pandemic is much harder when you’re asking people to take on significant change, especially when it’s not going backwards to something that they’re familiar with.”

The Rams are the last of seven NFL teams to unveil new uniforms during this offseason. The Chargers, who will share SoFi Stadium with the Rams, did so last month to widespread acclaim.