It has taken time for Fresno Unified School District students and staff to settle into the realities of distance learning, which became necessary after the COVID-19 pandemic led to school closures, district officials said Monday. 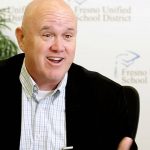 To make sure no students are falling through the cracks, school sites are keeping logs of contacts with students and their families, Superintendent Bob Nelson told reporters during a news videoconference.

Schools that can’t locate students are getting help from the district’s Department of Prevention and Intervention, whose employees are “working hard to track down the lost lambs,” he said.

Nelson acknowledged that while many families are struggling with economic, employment, and health issues that resulted from the closing of schools and many workplaces, the education of children needs to be a priority.

Fresno Unified trustees had reported at the April 15 board meeting that numerous parents had complained to them about not getting a phone call or email from a school official weeks after the March 13 shutdown.

Communication “is a two-way street,” he said. Parents who feel the need for more school contact can and should call the school principal.

Parents can help school officials by making sure that all contact information held by the school is current, including the primary language spoken in the home.

The district is using a myriad of communication methods to reach out to students and their families in an effort to lower any hurdles to distance learning, Nelson said.

With messages constantly streaming out on a variety of platforms and in multiple languages, some have commented that the district might be doing a little too much communicating these days, he said. Yet, Nelson said, others say they’re still in the dark.

The role of parents in distance learning is critical, board president Keshia Thomas said.

Parents Need To Step Up

Thomas said she stays on top of the emails that her son receives from his teacher and makes sure he’s aware of what’s expected of him.

“We’re basically homeschooling our kids, so we have to think outside the box,” she said.

Distance learning has been problematic for some families that either lack laptops or tablets or internet access, which the district has been addressing in recent weeks.

Nelson acknowledged that the learning curve for students, their families, and educators has been steep, and adjusting to distance learning has not been easy on anyone.

In the event that a second wave of coronavirus infections surfaces in the fall, as some health officials are predicting, and schools are closed again, Fresno Unified will need to be able to pivot more quickly between classroom and distance learning. Next time the learning curve will be flatter, he said.

Are They Falling Behind?

Given the challenges of distance learning, some are concerned that Fresno Unified students, who already test near the bottom when compared with other large urban districts, will fall even further behind.

Parents can use existing tools such as i-Ready to evaluate their child’s progress in math and English, Nelson said.

The i-Ready program, which was first piloted in the African American Academic Advancement program, is available to students districtwide and has been used as a diagnostic and skills-boosting tool for a year.

“There’ll be a need to make sure that we don’t further exacerbate inequities by moving to a digital format,” Nelson said. “So criteria-based reference testing is the answer.”