BATON ROUGE, La. — In a day of dizzying developments, governors across the U.S. sounded a perilous alarm about the rapid spread of the new coronavirus and warned of dire consequences for their health care systems.

“Our trajectory is basically the same as what they had in Italy. And if there’s anything I said today that ought to get people’s attention, it is that. If we are not going to look like Italy in 10 days or two weeks, it will only be because of these mitigation measures.” — Louisiana Gov. John Bel Edwards

The governor of California issued a statewide stay-at-home order, Pennsylvania’s governor ordered more than 150 types of businesses to close, the governor of Texas closed schools for more than 5 million students and the Louisiana governor delivered a grim assessment of his state to President Donald Trump.

U.S. governors told the president Thursday that their states are in immediate need of federal help as they expand measures to contain the new coronavirus. Louisiana Gov. John Bel Edwards said his state’s health system could be overwhelmed in a week.

“Our trajectory is basically the same as what they had in Italy. And if there’s anything I said today that ought to get people’s attention, it is that,” the Democratic governor said. “If we are not going to look like Italy in 10 days or two weeks, it will only be because of these mitigation measures.”

In a conference call with other governors, Edwards warned Trump of the “worst-case scenario” modeling. But he also told reporters that Louisiana was on track for that “sobering” reality if the state’s residents don’t actively work to decrease contact with others — staying home more and distancing themselves from people.

Louisiana had nearly 400 positive tests for COVID-19 Thursday, up from 280 a day earlier, Edwards said. Ten people have died.

Sobering projections for infections and hospitalizations prompted governors across the country to take their toughest actions to date to try to control the outbreak.

California Gov. Gavin Newsom said infection rates are doubling every four days in some parts of the state and issued the dire prediction that 56% of the state’s population — equal to 22.4 million people — could contract the virus over the next eight weeks.

His order late Thursday restricted non-essential movement for all residents.

“This is a moment we need to make tough decisions,” Newsom said. “We need to recognize reality.”

Earlier in the day, he asked congressional leaders for $1 billion in initial federal funding to help the nation’s most populous state fight the virus. He also asked for the federal government to deploy the USNS Mercy Hospital Ship to the port of Los Angeles to help the state “decompress” its health care system, predicting that California would be thousands of hospital beds short of meeting the demand.

In their teleconference with Trump and Vice President Mike Pence, governors pressed for more supplies — masks and other protective equipment for medical professionals, test kits and life-saving supplies such as ventilators.

New Mexico Gov. Michelle Lujan Grisham said she wanted better coordination between the federal government and the states regarding the supply chain for essential medical equipment.

“Where is it, who is making it and where is it getting deployed?” said Grisham’s spokesman, Tripp Stelnicki. “There really needs to be more clear communication.” 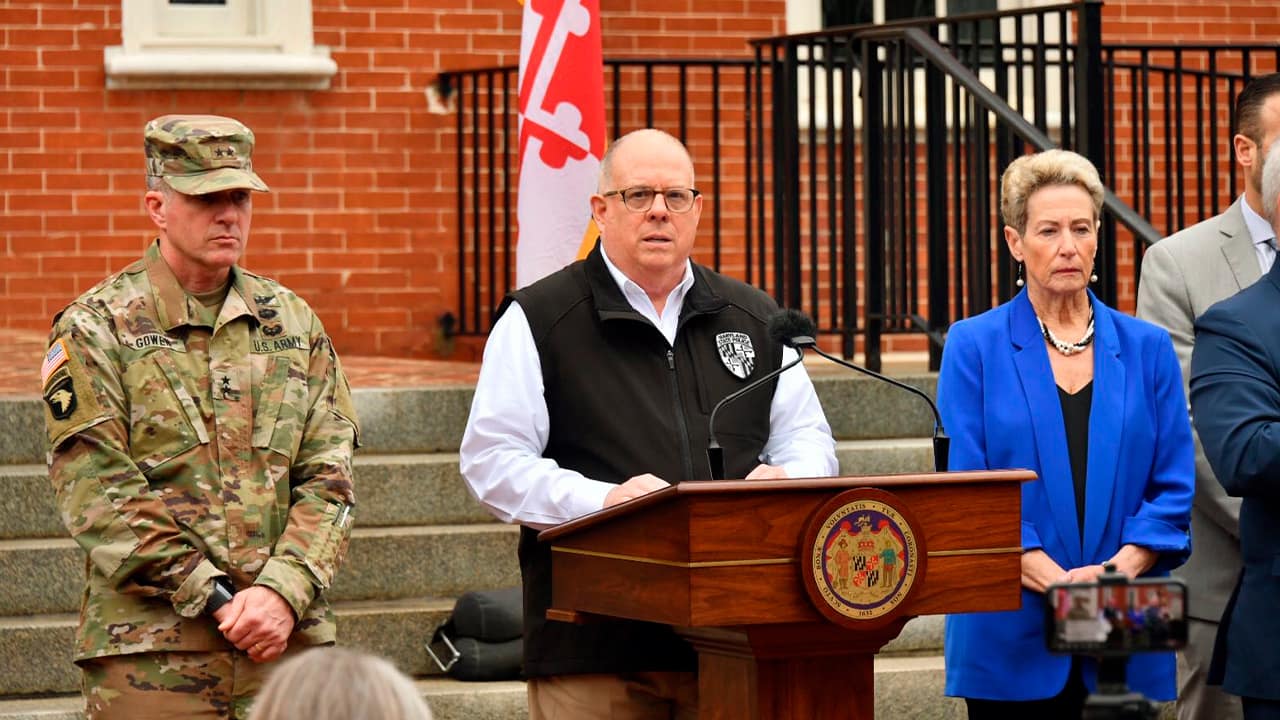 Maryland Gov. Larrry Hogan Hogan gives an update on the coronavirus pandemic Thursday, March 19, 2020 at the State House in Annapolis. He said the state Department of Transportation will restrict access to BWI-Thurgood Marshall terminal to ticketed passengers and necessary personnel. (Amy Davis/The Baltimore Sun via AP) )

The White House disputed governors’ claims that they could not get equipment but offered help to states that were struggling to acquire materials such as test swabs and processing agents.

“We need all levels of government working together to get through this crisis.” — Maryland Gov. Larry Hogan, chairman of the National Governors Association

Governors also asked for additional oversight of their National Guard units, mostly to have more leeway to deploy them for humanitarian purposes. They want Guard units to help run mobile screening facilities, disinfect public spaces and distribute medical supplies such as gloves, gowns and face shields.

“We need all levels of government working together to get through this crisis,” said Maryland Gov. Larry Hogan, chairman of the National Governors Association.

Urgent developments accelerated throughout the day, as more governors made sweeping recommendations for residents to avoid public spaces or greatly limit their exposure to others.

Minnesota Gov. Tim Walz ordered health care providers to postpone elective surgeries and other medical procedures so they can focus on responding to the anticipated surge of coronavirus cases.

“The greatest risk we face during the COVID-19 pandemic is overwhelming our health care systems and limiting their ability to respond to emerging cases,” Walz said in a statement.

Hogan said governors also are requesting a delay or greater flexibility for completing the 2020 census and the transition to Real ID.

Maryland has waived state requirements so driver’s licenses won’t expire during the state of emergency to prevent crowds at Motor Vehicle Administration offices, he said. However, federal law requires Real ID compliance by Oct. 1. Hogan said governors don’t want people coming to MVAs with the documents they need to present in person to be in compliance.

“Other governors all agreed and said, ‘Yes, that’s a big problem for all of us.’ So, we’re just asking to push the pause button on all these things that require interaction with people where they would spread the disease,” Hogan said.