Local planning officials are racing to implement a state law that could dramatically increase the cost of building new homes and businesses in many local communities.

The law, which goes into effect July 1, changes the way planners evaluate the impact of vehicle trips generated by new development. The intent of the change is to encourage more infill development as an answer to concerns about air quality and sprawl.

But, the building industry is concerned the law’s goals will raise prices for consumers, especially those looking to buy a new home. One estimate predicts increases of $40,000 per unit.

SB 743 was signed into law in 2013. It was written by Darrell Steinberg — then a state senator and now the mayor of Sacramento.

The law changes how a development project’s traffic-related impacts are evaluated under the state’s environmental law, known as CEQA.  The metric used now is known as Level of Service (LOS). That standard will change to Vehicle Miles Traveled (VMT).

“One estimate is that it (implementation of the new law) could add up to more than $40,000 to the price of a new home.” — Mike Prandini, Building Industry Association

Under LOS, a city planning department might require a developer to widen streets or install a traffic signal to address anticipated vehicle congestion from new housing or business development.

With VMT, encouraging the use of public transportation and other “greener” technologies would be among the available offsets. The new metric favors projects with lower VMT scores, meaning developments that are closer to jobs, schools, stores and other services. VMT is also reduced when alternate travel options such as public transit, biking, and walking are available.

Public agencies at all levels are grappling with how best to implement the change as the deadline nears. One thing they all seem to agree on is that the new system is “confusing.”

“The only thing we know right now is that it will cost more and we expect it to add significant cost,” Prandini said.

Officials at the Fresno Council of Governments (COG)  — the regional agency in charge of Valley transportation planning — are creating maps showing current VMT levels across every local city. Final versions of the maps, based on census and other data, are expected in May.

It is up to local jurisdictions to decide how to use Fresno COG’s data in their project-review processes. Cities, like Fresno, are likely to use the maps to evaluate what mitigation methods, if any, would be required for a project to be approved.

“Shifting from determining climate impact based on traffic delays, to using a metric focused on how many miles people are actually driving, is central to helping California meet our climate commitments.” — Kate Gordon, California Office of Planning and Research

Preliminary data from COG shows an average of 17 VMT for county residents. A target, tied to the state law, is for new development projects to generate 15% less VMT than the county average. Those that do could be exempt from VMT mitigation requirements.

Projects not meeting that goal would be required to offer a plan to lessen the impact of longer travel distances. Prandini offered one model, that involves cities charging higher fees to pay for offsets.

“The mitigation measure must be ongoing and not a one-time fix,” Prandini said. “The requirement for ongoing mitigation is, at this point, the unknown cost.”

“One estimate is that it could add up to more than $40,000 to the price of a new home constructed under that VMT regulation for a project that only met the VMT threshold and not the 15% reduction. This was based on an assumed cost for bus passes provided to each resident of the new home over a period of 30 years,” he said.

Even with the new law, a city can still require traditional Level of Service mitigation measures to address localized traffic congestion. It would just not be part of the state-required environmental review portion of project approval.

Making the Case for California Law

State planners say the goal of SB 743 is to rethink the impact cars and traffic have when it comes to urban design.

The VMT measurement opts for a shorter overall commute, even if much of it includes heavier traffic. The prevailing idea is shorter trips are better for the environment.

“Shifting from determining climate impact based on traffic delays to using a metric focused on how many miles people are actually driving is central to helping California meet our climate commitments,” said Kate Gordon, Director of the Office of Planning and Research. Gordon is also Gov. Gavin Newsom’s top adviser on climate.

A video from Gordon’s office described why the state recommended VMT as a better system of evaluating vehicle impacts. 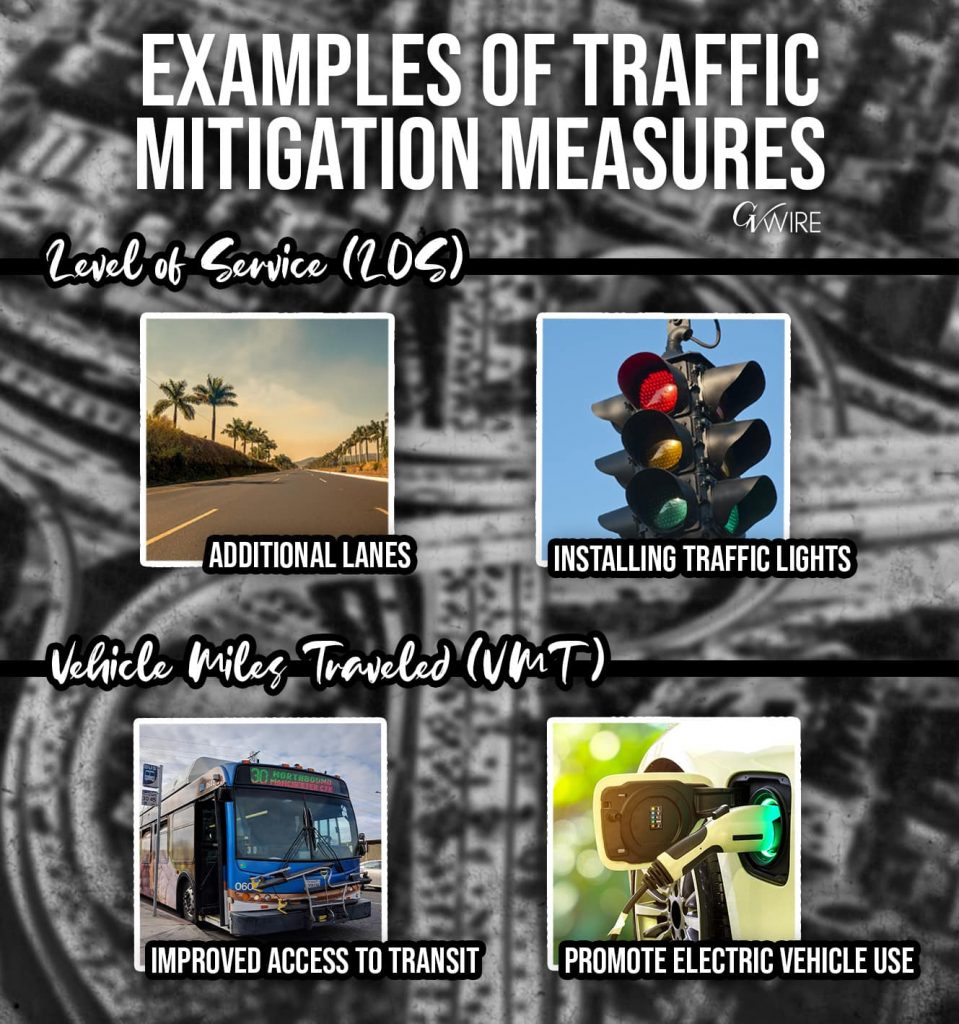 For example, an empty street with plenty of lanes in a suburban part of town is measured as a “success, even though there’s not much of anywhere to go.” That is followed by a picture of a busy downtown with heavy traffic, viewed as an “abject failure even though there are plenty of places you can get to just within a few steps.”

The video also quotes a UCLA study concluding: “What our analysis does suggest, however, is that a myopic focus on the traffic impacts of new developments is misguided and may actually decrease accessibility and economic activity in an effort to protect traffic flows.”

Gordon tells GV Wire switching to the VMT standard would not only benefit the environment but also the economy.

Future widening projects on Highway 41, Highway 99 and other roadways will be affected by the new VMT metric and its underlying goal to reduce vehicle usage and emissions.

“This shift provides regional and local planners with new tools to expand transportation options for commuters and incentives for infill development so that Californians have the opportunity to spend less time in transit,” Gordon said. “This shift comes at an exciting time for transportation innovation, with new options like on-demand vanpools, e-bikes and scooters, and electrified transit coming on line every day.”

Still, close to 2 million new cars were registered in the state in 2019, which indicates that the demand for personal vehicles remains strong.

Rob Terry, Reedley’s community development director, says rural cities like his may be hit the hardest by the new development metric.

“It is just going to end up being a very large logistical challenge,” Terry said of building new developments, particularly affordable housing.

The maps Fresno COG is working on will show areas within a city of where the VMT threshold is 15% below the county average. Terry notes a problem with trying to build in the “green zone” as it will be designated on the map.

“Those are all built out urban environment areas. If you’re looking to place any type of housing in particular in those areas, it’s going to have to be a retrofitted infill, potentially even a mixed-use product,” Terry said.

“For many of the rural agencies right now, there isn’t a return on investment for the development community to really capture all the costs associated with that type of development, to make it something that’s plausible for them.”

“It is just going to end up being a very large logistical challenge.” — Rob Terry, community development director for Reedley

Another potential challenge for Fresno County’s rural communities is the number of residents who travel to Fresno or Clovis for jobs. Those commuters will undoubtedly increase VMT within smaller cities, leading to more state-mandated mitigation measures.

Travel between Central Valley cities will also be affected, according to COG’s expert.

Kai said future highway widening projects will now be scrutinized using VMT scoring. “Such capacity increasing projects on our freeway system will have to go through ‘induced demand’ analysis, which is travel that would not otherwise be generated without such projects,” she said. 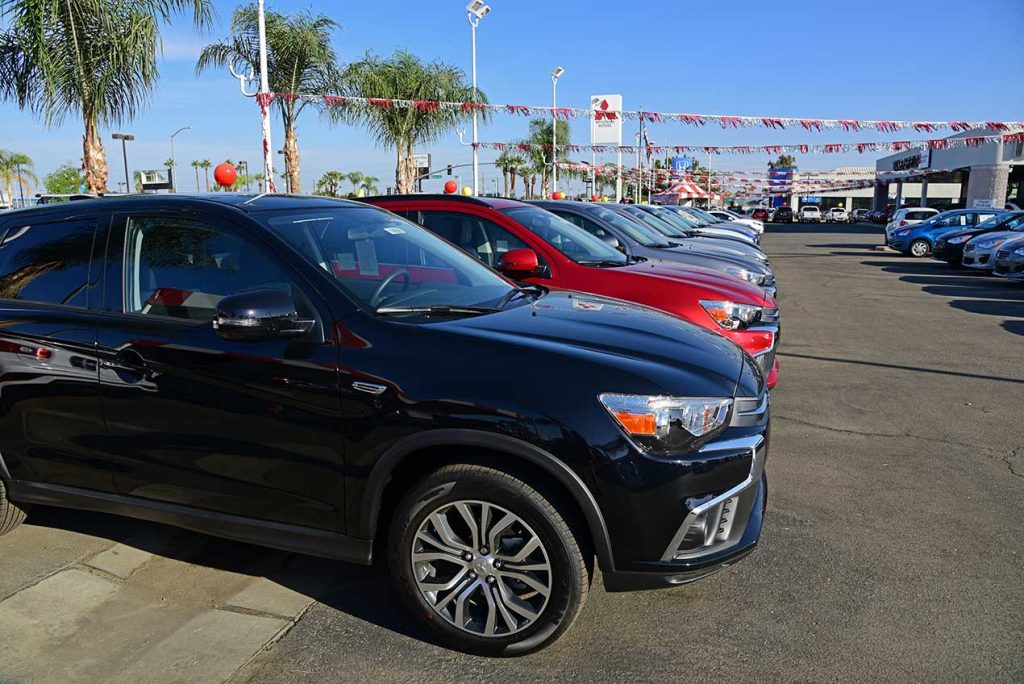 Though new car registrations in California have declined from their peak in 2016, approximately 1.8 million new consumer vehicles were sold in the state last year. (Shutterstock)

Several Fresno County cities are still meeting to decide how to implement the VMT structure.

With final Fresno COG maps out in May, it would give local cities only a few months to put strategies in place for the July 1 implementation deadline.

Last week, the Clovis City Council hired a consultant to help with the VMT process. Officials hope to create a preliminary guide by June, and a final document in the fall.

“It’s still too early to determine where VMT-related mitigation will be required, and what the cost of mitigation might be. At this point, a list or description of specific mitigation measures that will be applied in Clovis has not been established,” Clovis City Planner Dave Merchen said.

Terry said if mitigation involves financial penalties for building outside the urban core, “that’s going to be an additional cost that would be passed on to the development community. And we’ll simply just equate it to projects not happening in the areas that need them the most.”

“My fear is that there are going to be a lot of agencies out there that didn’t realize how much of an impact until it was already supposed to be in place and implemented,” Terry said. “Now, it’s absolutely staring them in the face.”

The new requirements come at a time when the city of Fresno is debating the future of its 5-year old General Plan. In 2014, the city approved a dramatic overhaul of its blueprint guiding where housing and other development should be built in the coming decades. The plan strongly encouraged infill.

But, Fresno City Councilman Luis Chavez and other council members have noted that the city had not been meeting its infill housing goals. The council established a review committee that is holding meetings on whether to allow more development in newer, open areas where construction costs are traditionally lower. Builders say those lower costs result in more affordable homes for local buyers.

Related Story: Revisiting Fresno’s Sputtering Growth Plan Is a Must

(Darius Assemi, publisher of GV Wire and CEO of Granville Homes, is a member of the General Plan review committee.)