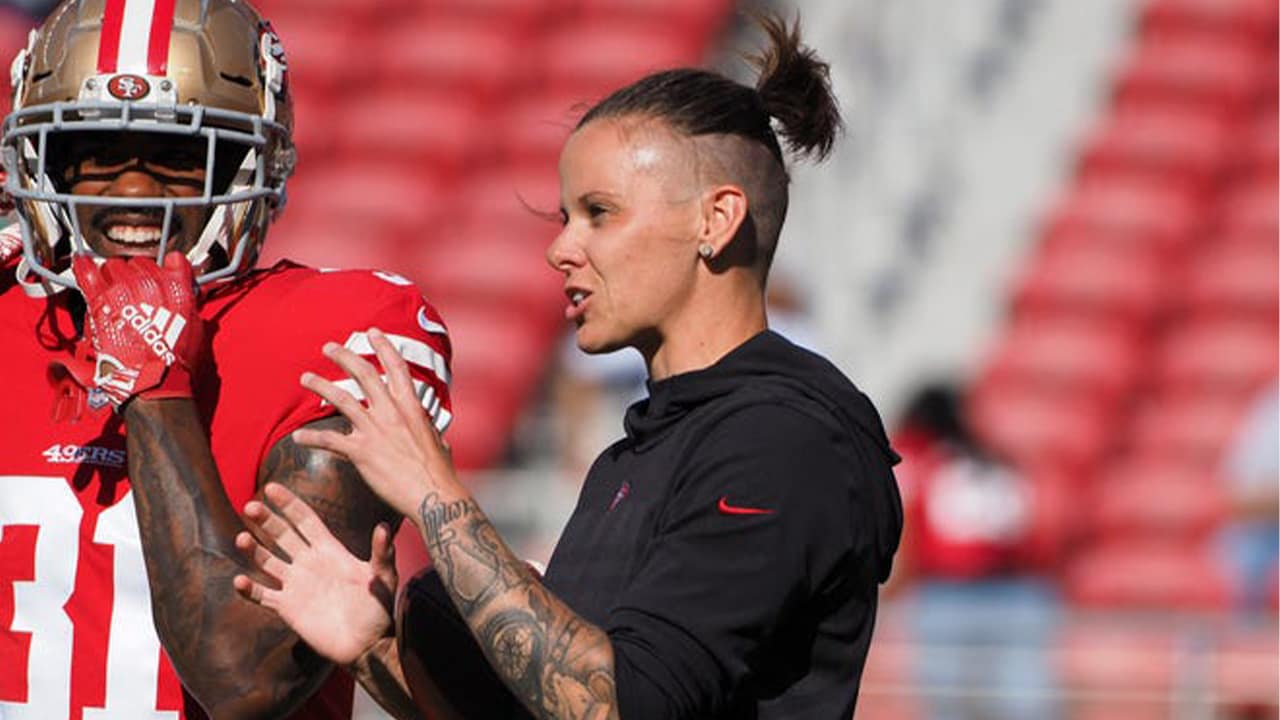 MIAMI — Katie Sowers answered questions on topics ranging from whether it hurt getting her ears pierced (no) to if she wants to be an NFL head coach one day (yes).
For the full 60 minutes of the San Francisco 49ers’ portion of media night on Monday, Sowers talked with reporters from around the world on making history as the first woman and first openly gay coach to work the Super Bowl.

She might’ve become a basketball coach after wrapping up her college basketball career at Goshen College in Indiana. But being gay kept her from becoming a volunteer assistant there in 2009. Current Goshen President Rebecca Stoltzfus apologized to Sowers for that last week and noted those sexual orientation policies were ended in 2015.
Sowers played in the Women’s Football Alliance and for USA Football’s national team, including her best game ever where she intercepted five passes at safety against Germany. Injuries such as a separated shoulder and a torn labrum ended her playing career, leading her to Kansas City, where she earned a master’s degree at Central Missouri.
“I knew that I had a long road ahead of me if I wanted to be an NFL coach because I didn’t have the opportunity to play on a college team,” Sowers said. “I didn’t have the opportunity to break down film like a lot of these (coaches). … I didn’t have the opportunity to network like a lot of people did. But I was up for the challenge, so I bought every book I could and started doing it myself.”
In Kansas City, Sowers also had a part-time job coaching a youth basketball team with then-Chiefs general manager Scott Pioli being one of the parents. After being fired by the Chiefs, Pioli was assistant GM in Atlanta when he helped Sowers into the Bill Walsh Diversity Coaching Fellowship in 2016 with the Falcons working through the offseason and training camp before spending nine months as a scouting intern. Sowers Is Considered Just a Coach With the 49ers

That same fellowship took her to San Francisco in June 2017, working with wide receivers. Kyle Shanahan, who had been offensive coordinator in Atlanta, hired Sowers as an offensive assistant in 2018, and she’s gone from breaking down film and working on practice scripts to helping wide receivers coach Wes Welker and other offensive coaches.

“She loves sports, and she was so excited to see a woman with her same last name coaching,” Sowers said.
Reaching the Super Bowl has brought Sowers a much bigger platform, including a 30-second Microsoft commercia l that ran repeatedly during the NFL’s conference championships. Microsoft will thank Sowers for being the first woman Sunday in a new 60-second commercial during the Super Bowl. Her sights are set on much more: becoming an NFL head coach.
“Absolutely,” she said.
San Francisco cornerback Richard Sherman said getting a head coaching job in the NFL is always going to be a challenge with owners making the final decision and coaches being hired still “look a certain way.”
“I think it’s unfortunate because there’s a lot of qualified, very qualified, coaches of color and female coaches that deserve a job, deserve to get the opportunity to be head coaches,” Sherman said.
Well, Sowers has been doubted before.
“Look at me now,” she said.