Free Rides for 3 Assemblymen, and Wild Cards in House Race 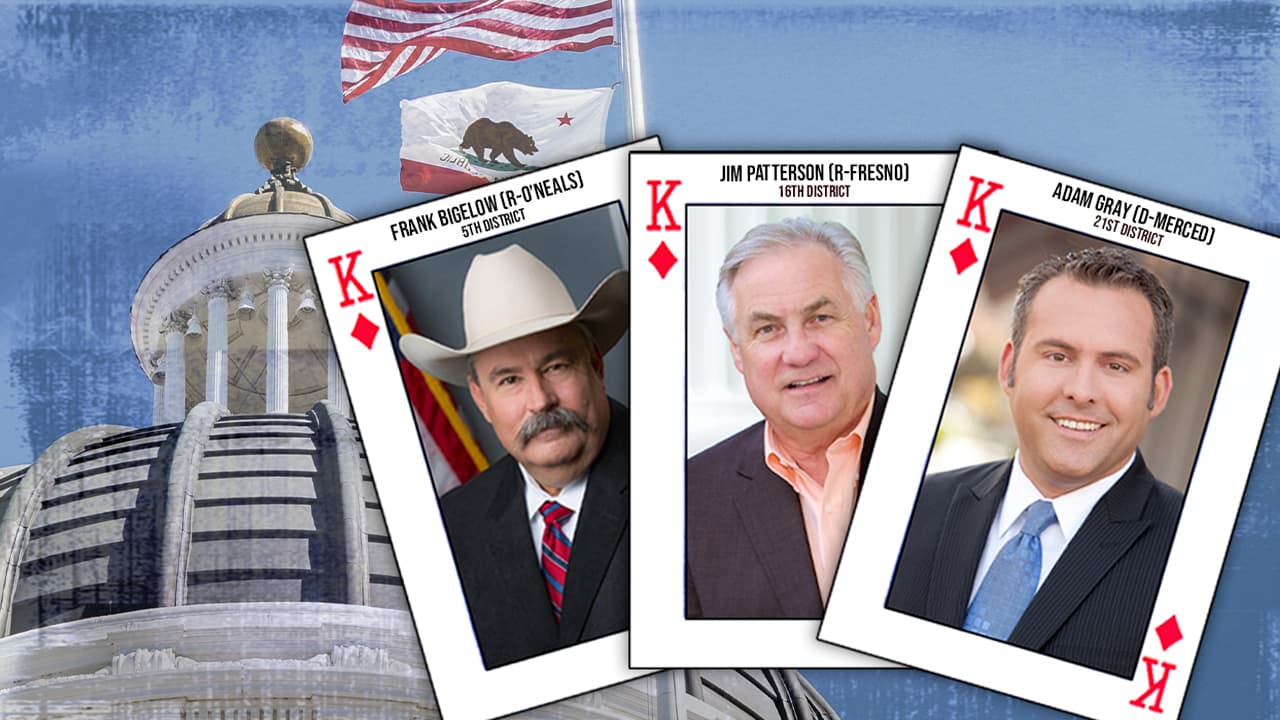 Fresno Republican Assemblyman Jim Patterson is unchallenged on the March ballot.
So are Republican Assemblyman Frank Bigelow of O’Neals, and Democratic Assemblyman Adam Gray of Merced.
But in a Valley congressional race that is expected to be highly competitive, two mavericks — a father and son from outside the region — are running against each other and the field.

These are some of the headlines now that Secretary of State Alex Padilla has certified the list of candidates in statewide and federal races. Here is a rundown:

Assemblyman Jim Patterson (R-Fresno) does not have a certified challenger in the 23rd District. Patterson first won election to the seat in 2012.
Bigelow and Gray are also unchallenged in the 5th and 21st Assembly districts respectively.
In Assembly District 26, Devon Mathis (R-Visalia) faces Drew Phelps, a Democrat and an analyst for Granville Homes. Darius Assemi, publisher of GV Wire, is the president/CEO of Granville Homes.
Joaquin Arambula (D-Fresno) goes for his fourth term in the 31st Assembly District. He is challenged by Parlier business owner Fernando Banuelos, a Republican.
In the 32nd Assembly District, Republican Todd Cotta — president/CEO of the Kings Gun Center in Hanford — looks to unseat incumbent Rudy Salas (D-Bakersfield). Salas first won election to that seat in 2012.
There are no state Senate seats in the San Joaquin Valley on the ballot. CD 21: A Rematch Plus Spoilers

The 21st House seat is a 2018 rematch: TJ Cox (D-Fresno) is attempting to hold serve against the man he defeated, former three-term congressman David Valadao, a Republican farmer from Hanford.
Two wild cards (and unconventional candidates, to put it mildly) have joined the race: San Diego businessman Rocky De La Fuente (Republican) and his son, Ricardo De La Fuente (Democrat).
Rocky also will be on the presidential ballot twice — as a candidate for the Republican and American Independent tickets.
His other son, also known as Rocky, is running for president on the Democratic ticket.
Additionally, Ricardo De La Fuente is the Texas ballot as a congressional candidate.
The SJV Sun has background on the De La Fuentes. These are not their first political rodeos.

Jim Costa (D-Fresno), in the 16th District, faces two other Democrats — Fresno Councilwoman Esmeralda Soria, and human resources director Kim Williams of Merced — as well as former educator Kevin Cookingham of Madera County. Cookingham is a Republican.
22nd District Rep. Devin Nunes (R-Tulare) takes on three Democrats: Bobby Bliatout, Phil Arballo, and Dary Rezvani, all of Fresno. Marine Corps veteran Eric Garcia is in the race, too. He is registered as no party preference.
Rep. Tom McClintock (R-Roseville) faces a crowd in the 4th District, which stretches from north of Lake Tahoe to the Madera and Fresno County foothills. His Democratic opponent is Brynne S. Kennedy. Republicans Julianne Benzel, Jamie Byers, and Jacob Thomas, along with no party preference candidate Robert Lawton, are on the ballot.
House Republican Leader Kevin McCarthy (R-Bakersfield) is challenged by Democrat Kim Mangone in the 23rd District.
All of the Assembly and congressional races use the top-two format. That means the top two vote-getters, regardless of party, advance to the Nov. 3 general election. This applies even if only two candidates run.

Steyer Will Be in Fresno on Monday. Find Out Where.