Some of 2019's Most Memorable Games Decided by Blown Calls 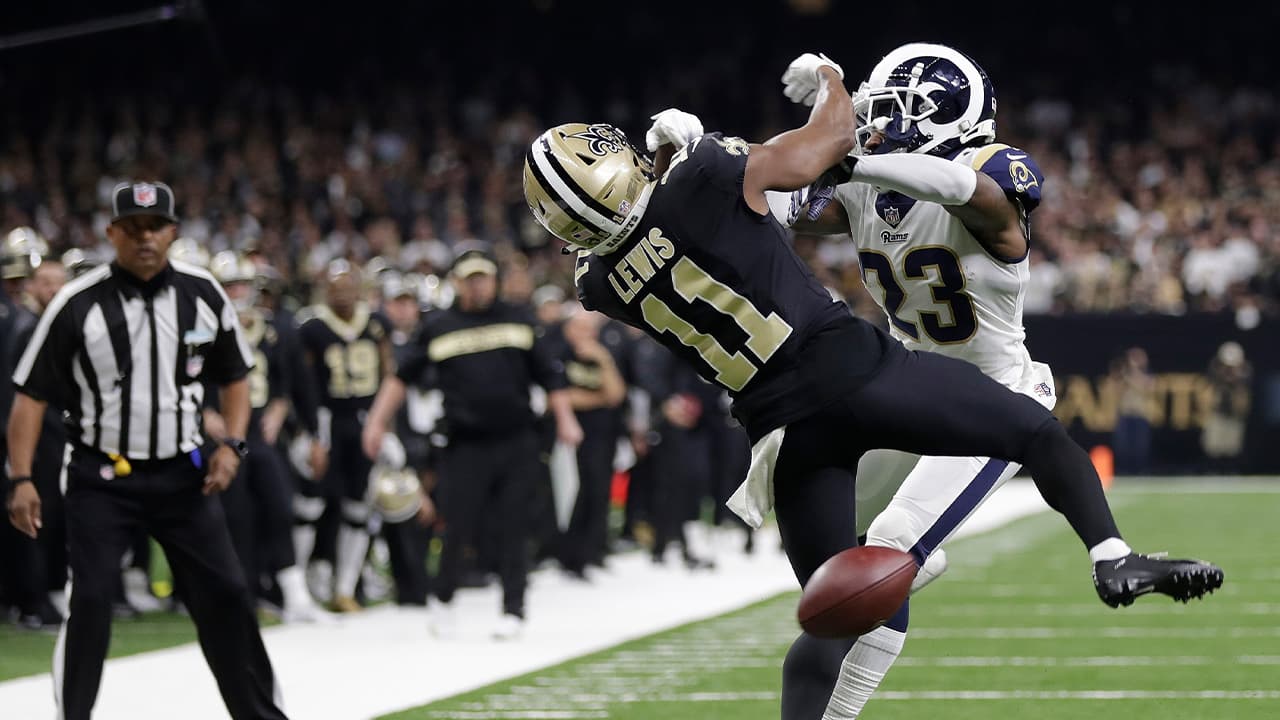 The New Orleans Saints looked around in disbelief, searching for a yellow flag that never came during the NFL playoffs.
The Auburn Tigers were sure they’d get the ball after a Virginia player appeared to double-dribble in the closing seconds of a thrilling Final Four game, but the refs let it go.
Not long after, the guys in stripes weren’t so lax, whistling a disputed foul that sent the Cavaliers to the line for the winning free throws.
Some of the year’s most memorable games were decided by controversial calls — or, perhaps it would be more appropriate to say, the calls that didn’t get made.
Let’s take a look back at the Top 10 from 2019:

T he Los Angeles Rams advanced to the Super Bowl with an overtime win against the Saints that would not have been possible without an egregious mistake by the officials in the closing minutes of regulation.

One year after becoming the first top seed to lose to a No. 16 seed, Virginia appeared headed for more heartbreak in the NCAA Tournament.
The Cavaliers squandered a 10-point lead in the final five minutes to Auburn. But they managed to pull it out, with a big helping hand from the officials.
Virginia’s Ty Jerome appeared to double-dribble for what could have been a decisive turnover. Or Jerome might have been fouled before the mishandle. There was no whistle for either.
With 1.5 seconds left and in need of some magic, Virginia got the ball to Kyle Guy in the corner. He turned and fired as Samir Doughty, hands straight up in the air, bumped into Guy’s hip. The shot was short, bouncing off the rim as Auburn started to celebrate.
Game over? Nope.
Official James Breeding called a foul on Doughty, sending Guy to the free-throw line. He calmly knocked down all three shots to give Virginia a disputed 63-62 win. Two nights later, in another overtime thriller, the Cavaliers captured their first national title by beating Texas Tech.
“We kind of thought we had it sealed,” Auburn’s Bryce Brown said. “I just didn’t agree with the call.” Auburn and New Orleans weren’t the only teams to gripe about the officiating,
The NHL season ended for the Vegas Golden Knights in Game 7 of the playoffs after a major penalty sparked the San Jose Sharks to a 5-4 overtime victory.

Add another entry to Liverpool’s long list of storied comebacks.
This time, Lionel Messi and mighty Barcelona were on the receiving end in the semifinals of soccer’s European Champions League.
After romping to a 3-0 win in the first game of the home-and-home, total-goals series, Barca seemed a lock for the final.
But, back on their home turf at Anfield, Liverpool pulled off a stunning 4-0 victory that propelled the club to its sixth European title.
“This club has a big heart, and tonight the heart was pounding like crazy,” manager Juergen Klopp said. “You could feel it all over the world.”
Twenty-four hours later, Tottenham overcame a three-goal halftime deficit on the road, stunning Ajax in the other Champions League semifinal.
“We saw Liverpool last night,” Tottenham fullback Danny Rose said. “It goes to show it’s not over until it is over.” After more than nine stomach-churning hours, the first Super Over in Cricket World Cup history — and perhaps the most extraordinary over ever played — came down to one last ball.
England calmly prevailed in the fading sunlight of Lord’s as New Zealand’s desperate scramble to score what would have been the winning run came up short. So ended the home team’s agonizing 44-year wait to be crowned world champion of the sport it invented.
“The most ridiculous game of cricket to have ever been played,” said Jos Buttler, England’s wicket-keeper.
“The guys are shattered,” countered New Zealand captain Kane Williamson. “It’s devastating.” FILE – In this May 12, 2019, file photo, Toronto Raptors forward Kawhi Leonard, second from left, celebrates his game-winning basket as time expired at the end of an NBA Eastern Conference semifinal basketball game against the Philadelphia 76ers, in Toronto on Sunday,. Toronto won 92-90. (Frank Gunn/The Canadian Press via AP, File)

Megan Rapinoe capped a remarkable year of sporting excellence and social activism by leading to United States to its second straight Women’s World Cup title.
Rapinoe broke a scoreless tie in the final with a second-half penalty kick, and the Americans went on to beat the Netherlands 2-0.
Rapinoe won the Golden Ball as top player and the Golden Boot as top scorer in the month-long tournament, but her impact went far beyond the field. She sparred with U.S. President Donald Trump and was one of the leading voices on a squad that loudly demanded equal pay with the men’s team.
“We’re such a proud and strong and defiant group of women,” Rapinoe said.
Her trademark victory pose, looking skyward with arms outstretched, also became a worldwide sensation. FILE- In this July 7, 2019, file photo, United States’ Megan Rapinoe, center, holds the trophy as she celebrates with teammates after they defeated the Netherlands 2-0 in the Women’s World Cup final soccer match at the Stade de Lyon in Decines, outside Lyon, France. (AP Photo/Francisco Seco, File)

In the wake of Typhoon Hagibis, host Japan turned in a thoroughly inspiring performance at the Rugby World Cup in its final group stage match against Scotland.
A brilliant display by the team known as the “Brave Blossoms” gave them a big halftime lead. Then they held off a furious Scottish comeback to preserve a 28-21 victory.
Japan advanced to the quarterfinals for the first time. Even though they lost to eventual champion South Africa, their tournament run was just what their battered nation needed after the ferocious storm. FIEL – In this Oct. 13, 2019, file photo, Japan’s Kenki Fukuoka crosses the goal line for his team’s third try against Scotland during the Rugby World Cup Pool A match at the International Stadium in Yokohama, Japan. (AP Photo/Christophe Ena, File)

Joe Burrow propelled LSU to the College Football Playoff and himself to the Heisman Trophy with a dazzling display against Tua Tagovailoa and Alabama in college football’s game of the year.
Burrow passed for 393 yards and three touchdowns, answered challenge after challenge, and helped end LSU’s eight-year string of futility against the Crimson Tide.
After the Tigers’ 46-41 victory, Burrow was carried off the field at Bryant-Denny Stadium by his teammates.
““We’ve finally got the tools that we need to beat those guys,” coach Ed Orgeron said. “To have a championship team, you’ve got to have a championship quarterback.”

Angel on the Pitcher’s Mound

In their first home game after the death of pitcher Tyler Skaggs, the Los Angeles Angels honored his memory with a combined no-hitter from Taylor Cole and Félix Peña in a 13-0 victory over Seattle.


“He was definitely looking over us tonight.” — Mike Trout
The Angels played a practically perfect game on the day before what would have been Skaggs’ 28th birthday.
“He was definitely looking over us tonight,” said Mike Trout, who contributed a 454-foot homer and six RBIs.
Later, officials ruled that Skaggs’ died from an accidental drug overdose, prompting Major League Baseball to start testing for cocaine and opioids. Members of the Los Angeles Angels place their jerseys with No. 45 in honor of pitcher Tyler Skaggs on the mound after a combined no-hitter against the Seattle Mariners during a baseball game, July 12, 2019, in Anaheim, Calif. (AP Photo/Marcio Jose Sanchez)