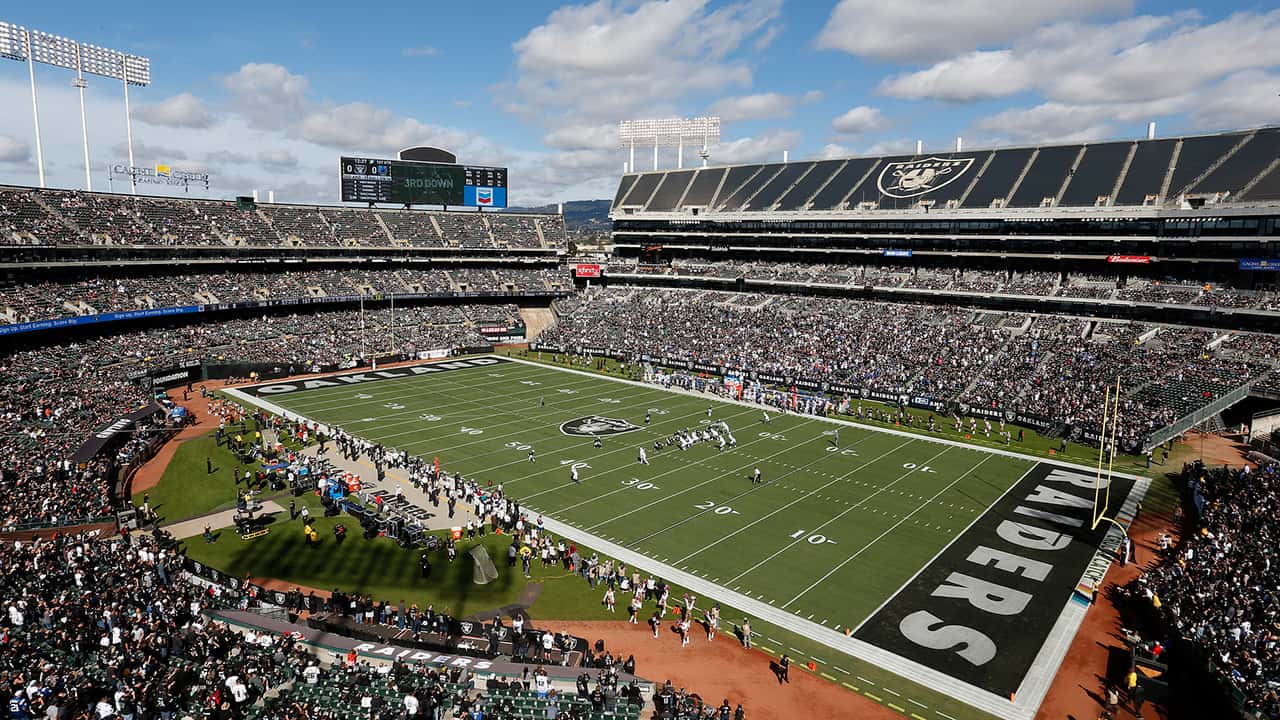 The NFL and the Raiders both botched the final football game at Oakland’s Alameda County Coliseum as the team prepares to pack up for Las Vegas in 2020.

A bad call contributed to a crushing late-game collapse by the Raiders that left the jilted Black Hole projecting venom and trash at the black and silver instead of celebrating one last hurrah with their heroes.
The Raiders (6-8) were in position to close out their quarter-century run in Oakland with a win when Derek Carr scampered for a first down and slid before reaching the sideline to make sure the clock would keep running.
The official erroneously ruled him out of bounds, which forced Oakland to run another play before the 2-minute warning, sparing Jacksonville from burning a timeout and giving the Jaguars an additional 40 seconds for a winning drive in a 20-16 victory in a game they trailed 16-3 at the half.
In the confusion that followed the call — which the NFL apologized to Jon Gruden for on Monday — Oakland got a delay of game penalty, Tyrell Williams dropped a third-down pass and Daniel Carlson missed from 45 yards after a penalty gave him a do-over on his miss from 50 yards.

That set the stage for Gardner Minshew’s touchdown toss to Chris Conley with 31 seconds left.

Among other noteworthy calls in Week 15:
— The New England Patriots were trolled at Paul Brown Stadium in Cincinnati a week after the Patriots went retro by bringing back the term "Spygate" into the NFL lexicon by acknowledging that a video crew working for the team filmed the Bengals' sideline in Cleveland a week ahead of their showdown in Cincy.
While the league ponders punishment for the repeat offenders, the stadium crew trolled the Patriots after Andy Dalton's touchdown throw to tight end Cethan Carter in the first quarter by playing Rockwell's "Somebody's Watching Me" over the stadium speakers.
— Peyton Manning congratulated Drew Brees for breaking his all-time record for touchdown passes — last year. In a humorous clip filmed last season, Manning congratulates Brees for breaking his career passing yards mark and then says the clip will also serve as a compliment for whenever he breaks his all-time mark for most TD throws — which he did Monday night in a 34-7 win over the Colts — "because as you can see I'm very busy. I don't have time to keep doing these videos for you congratulating you."
— LeShaun Sims' punt return hurt the Tennessee Titans' chances of a last-second comeback in their 24-21 loss to the Houston Texans that snapped a four-game winning streak.
Sims fielded the punt at the 1 as it was about to bounce into the end zone for a touchback. He returned it to the 12, costing his team valuable seconds.
With 17 seconds left, Ryan Tannehill was sacked for an 8-yard loss. He clocked the ball with 1 second left, but the officials ruled he had taken the snap at 1 second and time had run out by the time he spiked it, so the game was over.
Not that the Titans had much of a chance to score a 96-yard TD, but the officials were wrong on that last call and Sims was wrong to field the punt as it was about to go for a touchback, and that cost them a few seconds and certainly one more chance to get into field goal range to force overtime.