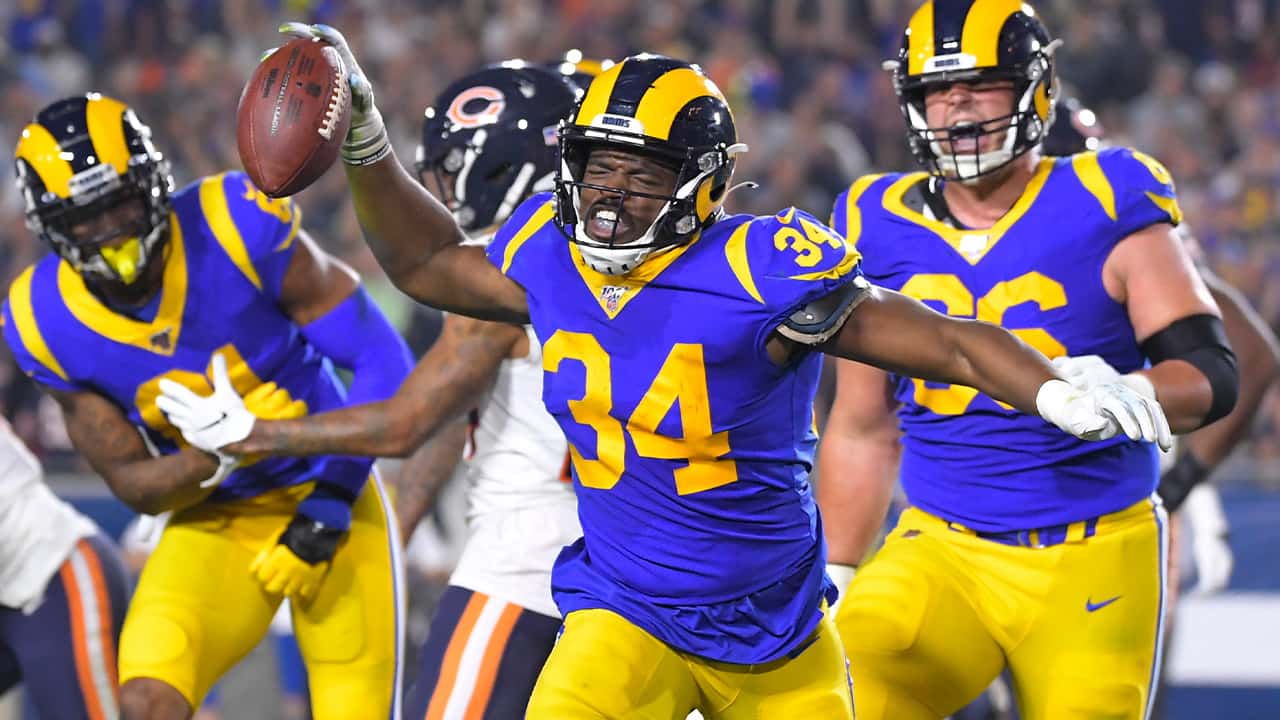 LOS ANGELES — Todd Gurley was told by Rams coach Sean McVay before Sunday night’s game against the Chicago Bears that he was going to be a focal point of Los Angeles’ offense.
Gurley rose to the occasion and delivered his best game of the season. The Bears (4-6) ran 22 more plays than the Rams but averaged only 3.6 yards. Mitchell Trubisky was 24 of 43 for 190 yards with a touchdown and interception. Trubisky injured his right hip on the last drive of the first half but didn’t come out until late in the fourth quarter, when Chase Daniel came in.
“I was just all arm in the second half pretty much,” Trubisky said. “Just trying to fight though the pain and trying to make the throws. I still felt like I was still putting the ball in some pretty good spots. Just couldn’t move around or couldn’t buy time.”
Gurley came in averaging 53.5 rushing yards per game, but had 63 in the first half, including three carries of 10 yards or more. After Greg Zuerlein opened the scoring with a 38-yard field goal early n the second quarter, Gurley put the Rams up 10-0 with 3:28 remaining on a 1-yard drive up the middle.
Gurley’s TD was set up when Goff connected with Cooper Kupp for a 50-yard gain. Kupp beat Buster Skrine up the left sideline and hauled in the pass at the 15 before he fumbled going out of bounds at the 1. It appeared as if Kupp might have fumbled it at the pylon, which would have been a Chicago touchback.
“When we’re at our best is when we’re running the ball well. There have been games when we haven’t and we’ve overcome it and thrown it but that’s not usually how we want to do it,” Goff said.
After Tarik Cohen’s third-quarter touchdown catch brought Chicago to 10-7, the Rams put it out of reach with 3:35 remaining in the fourth quarter on Malcolm Brown’s 5-yard run.
Chicago got to 10-7 on its first drive of the second half when Trubisky connected with Cohen for a 12-yard score. Cohen beat linebacker Cory Littleton in single coverage to score his third touchdown of the season.

Goff’s 11 completions and 18 attempts were career lows when starting a game, but the game plan was effective. Chicago’s Khalil Mack was held without a tackle or sack.
A lot of credit goes to the reworked offensive line. Left tackle Andrew Whitworth was the only constant with Austin Blythe moving from left guard to center. Austin Corbett, who was acquired last month from Cleveland, got his first Rams start at left guard with rookies David Edwards and Bobby Evans on the right side. Edwards got his fourth start at guard and Evans his first at tackle.
“It’s a testament to those guys how much they prepared,” Whitworth said. “You put four new guys at four new spots in the NFL and you lose 50-0. These guys came out and executed. That’s what good teams do and that’s what we’ve got to do more of.”

The Bears drove inside the Rams 35 on their first three series but had nothing to show for it. Eddy Piñeiro missed 48- and 47-yard field goal attempts and Chicago turned it over on downs on the second series.
“We’ve been struggling with drives, getting going, and we finally get a couple first downs,” Bears coach Matt Nagy said. “And now it might not sound great, but we were in position to kick a field goal to start the game and we missed it. And those are the ones I really wish we could have.”
Piñeiro began the season 9 of 10 on field goals but has missed three straight and four of his last seven. Nagy said after the game that he continues to have faith in his kicker.

Rams: WR Robert Woods was listed as a surprise inactive before the game due to a personal issue. Woods is second on the team in receptions (45) and had seven catches for 61 yards in last year’s game at Chicago. Brandin Cooks (concussion) also was inactive,
Bears: RT Bobby Massie suffered a back injury during the second half. He didn’t return.

At Surf Ranch in Lemoore, Celebrities Pay $10K an Hour to Ride Waves