Why Are There So Many Filipino Nurses in California? 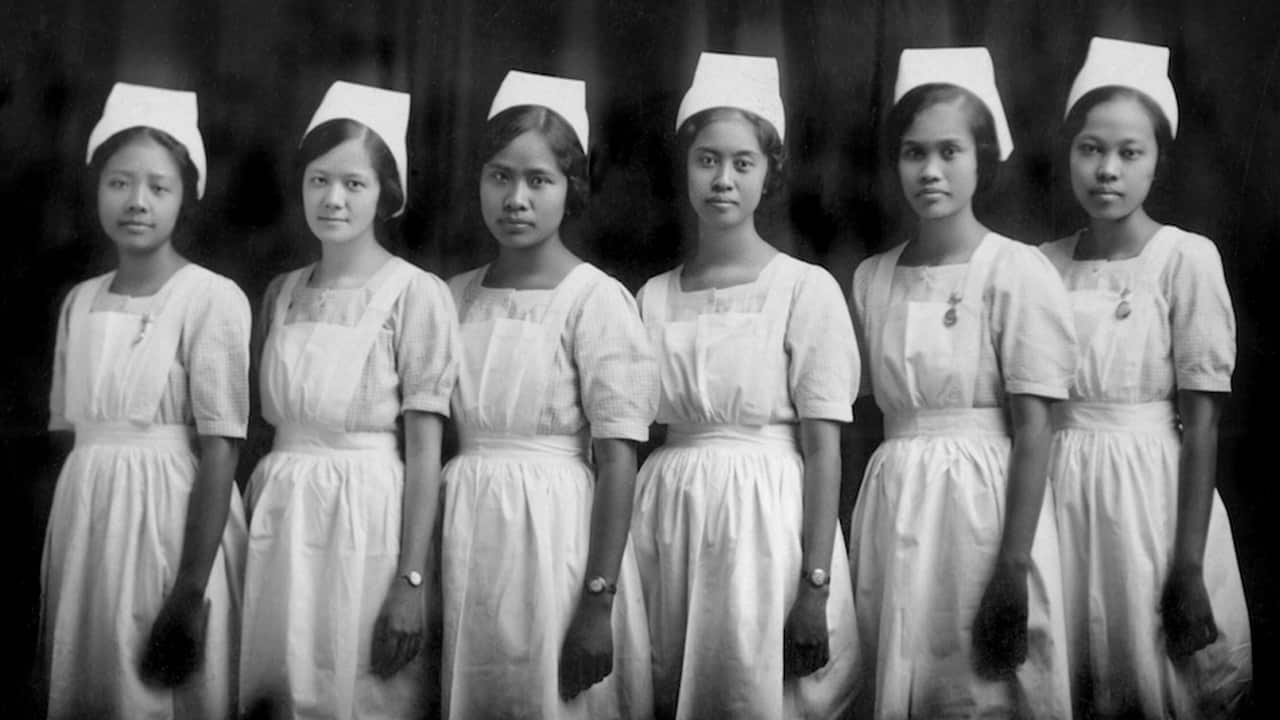 In California hospitals today, immigration has diversified not only the state’s patient population, but the demographics of  its caregivers as well.
It is now commonplace to be cared for at the bedside by a Filipino immigrant nurse. According to the 2016 Survey of California Registered Nurses, Filipinos make up the second largest group of the state’s active RN workforce, nearly 18 percent. Among younger nurses, they’re even more predominant, with Filipino nurses representing nearly a quarter of nurses between ages 35 to 44 years and more than one-fifth of RNs 45 to 54 years old. Catherine Ceniza Choy
Analysis
In the process of becoming essential to California, Filipino nurses have changed the definition of what we describe as care by bringing their own cultural practices and sensibilities to the bedside. At the same time, they have contributed to the research, business, and politics of American health care as directors of research centers, as entrepreneurs of health care institutions, and as leaders of labor unions and professional organizations.
The presence of Filipino nurses in California is not new; indeed, the nurses are part of a larger and more complex story of a medical field where cultural ideas and practices are frequently exchanged.
The predominance of Filipino nurses was catalyzed by three big changes in the United States during the 1960s. First, the establishment of Medicare and Medicaid resulted in an increased need for nurses, while, in a second major change, the women’s and civil rights movements resulted in new job opportunities for American women. At around the same time, a more equitable immigration law, called the Hart-Celler Act, was passed. As the increasing demand for nursing services became difficult to fill domestically, American hospital recruiters looked abroad.
Meanwhile, in the Philippines, high rates of domestic unemployment and political instability pushed Filipino nurses to emigrate overseas. The devaluation of the Philippine peso against the U.S. dollar made the United States a highly attractive destination. By the early 1970s, a Filipino nurse in the Philippines needed to work 12 years to earn what she could make in the United States in one year.

Change and Influence Don’t Move in Just One Direction

Some Philippine government officials initially criticized Filipino immigrant nurses for abandoning their home country. But, in the early 1970s, after observing the demand for Filipino nurses in the United States, then-President Ferdinand Marcos shifted the country’s development towards a labor export economy. The Philippine government began aggressively promoting the outmigration of Filipino nurses and other workers, eventually touting them as the new national heroes for the billions of dollars they remit annually in foreign currency.
There was another, more historic reason why the Philippines specifically became the leading exporter of professional nurses to the United States: U.S. colonization of the Philippines from 1898 to 1946 had led to the creation of Americanized professional nursing training in the archipelago. In the early twentieth century, American nurses trained Filipino students in courses such as practical nursing, the use of pharmaceuticals, and bacteriology. Philippine nursing licensure examinations included testing in the English language as well as in nursing-related subjects. Although intended to prepare Filipinos for Philippine self-government, these U.S. colonial policies inadvertently prepared Filipino nurses to work in the United States.
But change and influence don’t move in just one direction. Just as American nurses indelibly influenced Philippine nursing, so too have Filipino nurses changed the practice of health care in the United States.
In the U.S., Filipino nurses integrate Filipino cultural values and beliefs into their caregiving practices. Among these core values are a high regard for elders and authority, an emphasis on group harmony and interpersonal relationships, and the significance of modesty, sensitivity, and spirituality. Such values shape Filipino nurses’ renowned compassion and work ethic at the bedside. As one nurse stated: “I see my patients as my relatives and this influences the way I care for them. I feel that my upbringing helps me see people and care for them.”

Filipino Nurses Are at the Vanguard of Creating New Knowledge

Filipino immigrant nurses also bring experience with Philippine traditional therapies such as hilot, faith healing, and the use of medicinal plants. Hilot is a traditional form of massage therapy or chiropractic manipulation that relieves aches and pains.  This knowledge of Philippine healing modalities is important not solely because the use of alternative therapies in the U.S. has become more mainstream, but also because a growing number of Americans are of Filipino heritage. Between 1980 and 2016, the Filipino immigrant population in the United States nearly quadrupled.  California is home to the largest Filipino-American population in the nation with over 1.6 million of Filipino descent.


In the process of becoming essential to California, Filipino nurses have changed the definition of what we describe as care by bringing their own cultural practices and sensibilities to the bedside. At the same time, they have contributed to the research, business, and politics of American health care as directors of research centers, as entrepreneurs of health care institutions, and as leaders of labor unions and professional organizations.
As educators and researchers, Filipino nurses are at the vanguard of creating new knowledge relevant to Filipino Americans who have been generally underrepresented in health care-related research. For example, Felicitas dela Cruz is a professor at Azusa Pacific University’s School of Nursing and the director of its Center for the Study of Health Disparities. In her research with Carmen Galang, Dr. dela Cruz has found that, like other ethnic groups, Filipino Americans avail themselves of folk medicine as well as Western medicine to address illness. In the case of high blood pressure, they have utilized hilot and religious activities to lower their blood pressure.
Filipino nurses’ experience in health care has led to their ownership of health care businesses. The research of Jennifer Nazareno spotlights the growing number of Filipino immigrant nurses in Southern California who have become private owners and operators of small government-subsidized businesses in the long-term care industry, providing care to some of the most impoverished—as well as cognitively and physically disabled—elderly populations. While
this group of Filipino immigrant nurse entrepreneurs has created an important safety net for the most vulnerable in the American health care system, they are under tremendous stress to provide quality care within limited or fixed government-subsidized budgets.

Filipino nurses in the U.S., out of deep commitment to their profession, have also changed health care by forming organizations that provide social outlets and build political power. In the 1960s, pioneering Filipino nurses in California created professional organizations that would become known as the Philippine Nurses Association of Southern California and the Philippine Nurses Association of Northern California. Their mission is to promote the welfare of their members through community building and networking, to further their nursing knowledge and skills through professional development programs, and to contribute to health care and society.
Immigrant nurses initially created these organizations in order to address their isolation, loneliness, and educational needs, but they have also played a part in making Filipino nurses visible within the larger system.
As Filipino immigrant nurses have taken up positions of leadership in labor unions and professional organizations, they have addressed the politics of health care in the U.S. In 2015, Zenei Cortez was the first Filipino to be elected president of the California Nurses Association/National Nurse Organizing Committee, a labor union and professional association of registered nurses that has advocated for lower nurse-patient ratios and health coverage for all. Cortez is currently a president of National Nurses United, and a prominent advocate of Medicare for All.
While research has suggested that Filipino cultural values may contribute to Filipino nurses’ reticence and submissiveness, their encounters with discrimination have motivated them to fight for justice in California workplaces. Earlier this decade, a group of Filipino nurses—who claimed that they suffered from harassment and humiliation when they spoke Filipino dialects in break rooms and in the cafeteria, and that they were ordered to speak “English only”—won a landmark settlement against a Central California hospital. Although officials at Delano Regional Medical Center insisted they did nothing wrong, the hospital had to conduct staff training on diversity as part of the settlement.
And for all the power of Filipino immigrant nurses today, the story we’ve seen so far may prove to be just a small beginning. The American population is rapidly aging. Forecasts show dire shortages in the U.S. health care workforce by 2025. As important as Filipinos have been to developing the health care system today, their contributions will become even more critical in the decades ahead.
About the Author
Catherine Ceniza Choy is a Professor of Ethnic Studies at UC Berkeley. She is the author of Empire of Care: Nursing and Migration in Filipino American History. This essay is part of a Zócalo Inquiry, “California’s Immigrants Are Making Health Care More Wholistic and Human,” published with support from The California Wellness Foundation.

Related Topics:CaliforniadiversifiedFilipinosHospitalsnursesPhilippinespopulationRN workforce
Up Next

Conservatives Clap Back Against California in Court — Twice