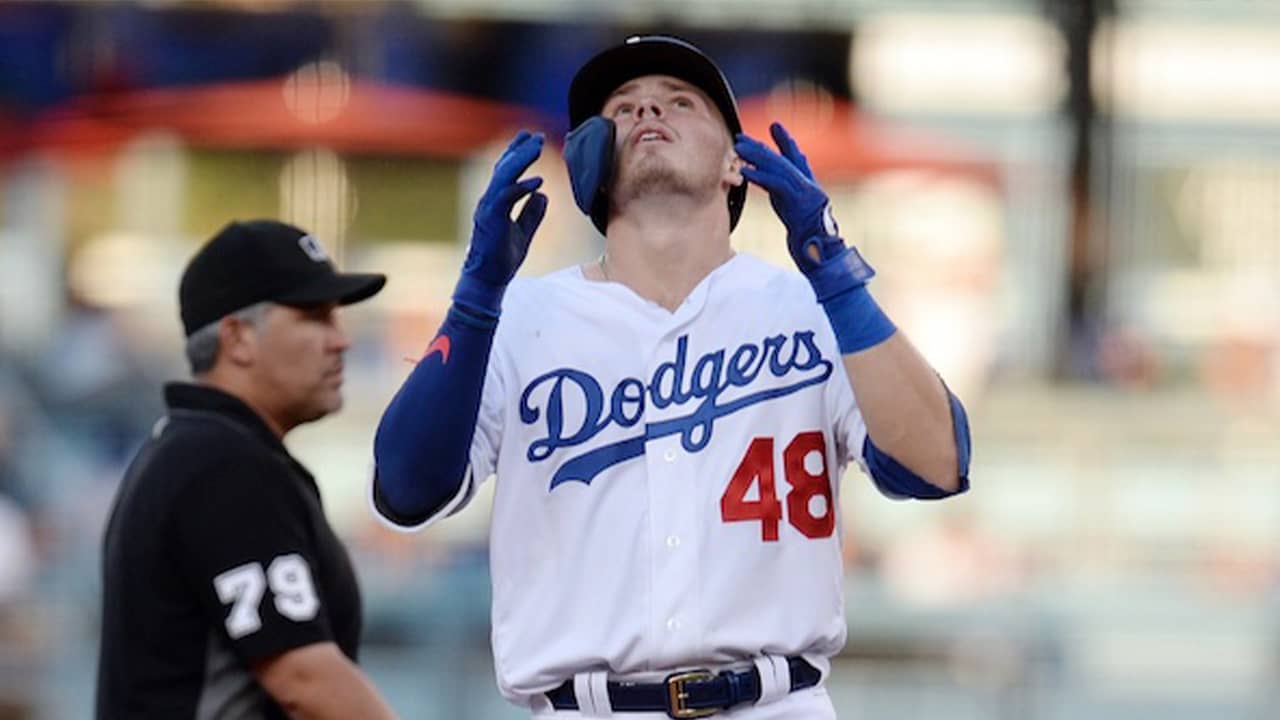 LOS ANGELES — Gavin Lux got a big cheer upon being introduced to the Dodger Stadium crowd for the first time.
The noise grew even louder when the rookie stroked a single to center field in his major league debut on Monday night.


“The Dodgers fans showed me a little bit of love. It was emotional.” — Gavin Lux
Lux went 2 for 5 and scored three runs in a 16-9 victory over the Colorado Rockies.
“The Dodgers fans showed me a little bit of love,” he said. “It was emotional.”
His parents, aunt and uncle and other friends greeted him after the game, exchanging hugs. In his locker, Lux had both of the balls from his two hits encased in acrylic boxes which he said would go to his parents. The lineup card rested on its side as another keepsake.
The Dodgers’ top prospect jumped on the first pitch, a 93-mph fastball, from Rockies rookie Peter Lambert leading off the second, launching a four-run inning that gave Los Angeles a 6-2 lead.
Lux scored the go-ahead run on a double to deep right by Joc Pederson.

Manager Dave Roberts Was Impressed With the Rookie

“I saw a video of my first hit and my dad started crying,” he said. “I thought he was a tough guy.”
Lux was even better in his second at-bat, working a 3-2 count against Yency Almonte before ripping a double to deep right-center leading off the third.
“I was nervous,” he said. “After the first ground ball and first at-bat, it was a weight off my shoulders.”
The 21-year-old from Wisconsin started at second base after being called up earlier in the day, a move that has been highly anticipated since the Dodgers drafted him with the 20th overall pick in 2016.
“Every kid’s dream is to get that call to play baseball,” Lux said before the game. “For me, it was a surreal moment. A lot of people sacrificed a lot to help me get to this point. I called up my parents and they started crying, making me emotional.”
Manager Dave Roberts was impressed with the rookie.
“You can just see that aura of confidence,” he said. “He earned his way here and knocked the wall down.”
Colorado manager Bud Black first saw Lux at spring training.

‘Obviously, I Wanted to Stay a Dodger’

“He looks to have the skill set and the confidence,” Black said. “We’ve scouted him and he possesses great talent.”
Lux was drafted out of Indian Trail High in Kenosha, Wisconsin, and skipped college to begin his pro career.

Lux Downplays the Expectations That Have Accompanied Him

“There’s as soft a landing as you can have with a team that’s very receptive to young players,” Roberts said. “He’s seen his teammates thrive as far as young players performing at this level.”
Roberts envisions Lux playing every day against right-handed pitching at second base, although utilitymen Kiké Hernández and Chris Taylor are in the mix, too.
“With what he’s done, arguably the best season of any minor league player this year in all of baseball, now you join a team that’s in a pennant race,” Roberts said. “There’s a lot of anticipation.”
With the Dodgers well in control of the NL West lead and on their way to a seventh straight division title, Lux could use September to play his way onto the postseason roster.
“We’ll see what happens,” he said.
Lux downplays the expectations that have accompanied him for three years. He can’t totally escape them, of course.
Grabbing a morning coffee at his hotel, Lux got on the elevator and a man immediately asked if it was really him before wanting a selfie.
“It was weird,” Lux said.
He better get used to the attention, on and off the field.

Wife Says Hart ‘Going to Be Fine’ After Car Crash