Celebs Try to out-Camp Each Other at Wild Met Gala 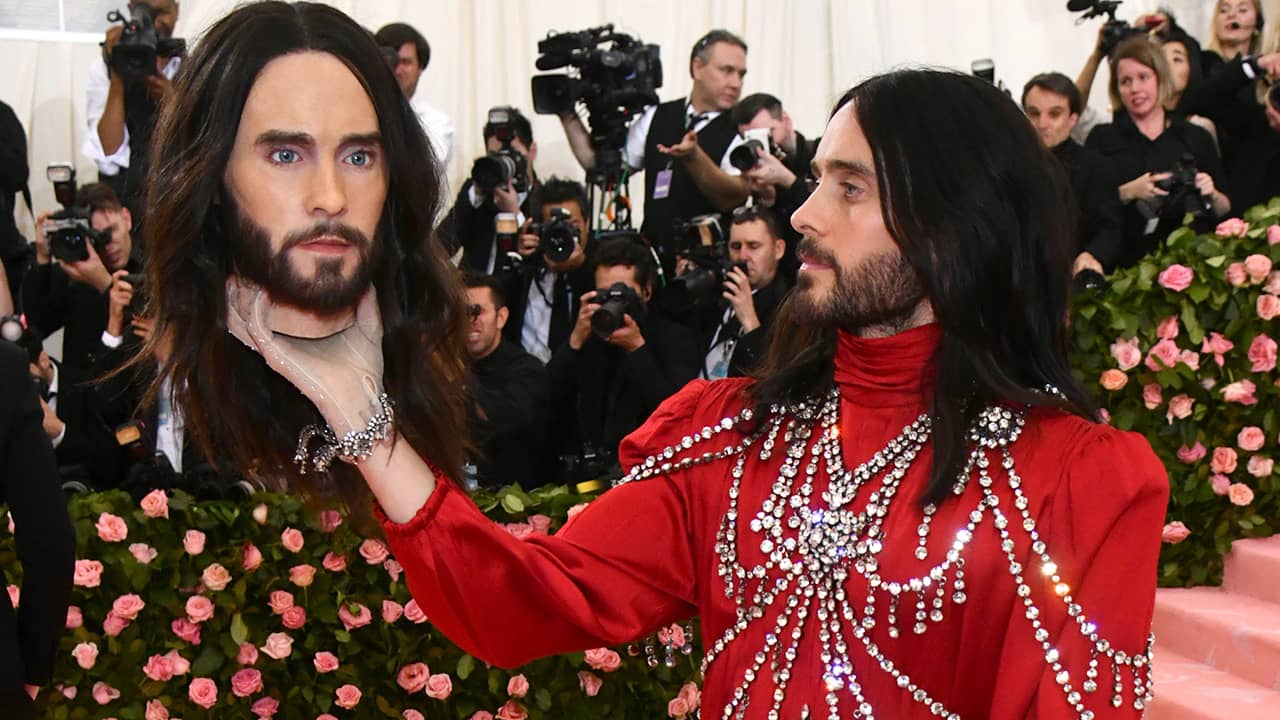 NEW YORK — Cardi B swept by in a stunning red quilted dress accentuated with a matching sequin headpiece, feathers and a train that took up much of the pink carpet, Jared Leto was accompanied by his own (fake) head and Katy Perry came as a candled chandelier at the crazy, campy Met Gala on Monday night.

Lady Gaga used the carpet as a runway and a changing station — earning giggles and claps from Anna Wintour — and Tiffany Haddish brought fried chicken in a plastic bag as many of the A-list guests worked the camp theme to the max. That included Zendaya, whose Cinderella Tommy Hilfiger dress went aglow with the wave of a magic wand. She dropped one of her see-through slippers on the way up the long staircase at the Metropolitan Museum of Art for the cocktail hour.

Also princessy, of the saucy variety: Nicki Minaj in a short pink Prabal Gurung dress with yards and yards to her train, the last star to walk the carpet.

Perry, whose look was created by Jeremy Scott for Moschino, said she wanted to be “of the light,” though she appeared concerned her heavy looking headpiece would topple as she smiled and walked precariously up the stairs, designer Diane von Furstenberg briefly in her orbit as Lady Liberty.

Perry, Bella Hadid dished, “had to be trucked here in a UPS truck.” (She changed from chandelier to a fully loaded Moschino burger for dinner).

Emily Ratajkowski channeled Cher in a barely there silver dress by Dundas and wing-like headpiece with feathers and hanging crystal strands by the House of Malakai. Tom Ford dressed Gemma Chan, who wore a custom headdress inspired by Elizabeth Taylor, and Versace created a jaw-dropping sparkler for Jennifer Lopez. She wore a 129.48-carat purple and diamond sapphire by Harry Winston around her neck.

“Camp is the art of being extra and I’ve always been extra. I’m from the theater so it’s easy for me.” — Billy Porter

Lupita Nyong’o spent four hours getting ready in a rainbow, cool chick getup, her hair high and packed with golden Afro picks. Leto wore a red caftan with jewel loops, cradling his long-haired macabre version of himself, and Tracee Ellis Ross posed inside a gold picture frame attached to the front of her black dress. She noted it’s detachable for the dinner hour, thank goodness.

“So, glamour is camp,” the Oscar-winner said. “Maybe next year the comfort level will have expanded.”

The 71st annual gala hit a high point early with Lady Gaga working the pink carpet to its fullest in long golden eyelashes and a huge fuchsia dress, peeling off layer after layer until she was down to a bra, panties and fishnet stockings.

Billy Porter went Egyptian-esque sun god in gold wings and a chain head piece by the design duo the Blonds, carried onto the carpet by shirtless men in gold pants as he lay on top of a black throne.

“Camp is the art of being extra and I’ve always been extra,” he laughed. “I’m from the theater so it’s easy for me.” Billy Porter attends The Metropolitan Museum of Art’s Costume Institute benefit gala celebrating the opening of the “Camp: Notes on Fashion” exhibition on Monday, May 6, 2019, in New York. (Photo by Charles Sykes/Invision/AP)

Brandon Maxwell, who created Gaga’s reveal, helped her navigate the stairs as she posed with several helpers. Maxwell undressed her further, revealing a black strapless asymmetrical ballgown underneath with a huge side bustle. Then she undressed again to show off a pink dress reminiscent of Marilyn Monroe in “Gentlemen Prefer Blondes,” walking up and down the carpet.

But she wasn’t done. Moments later, she was down to a glittering bra and panties set, with huge platform shoes.

Gaga is a hard act to follow but Serena Williams, one of her co-hosts, did her best in a neon yellow flowing custom Versace gown adorned with leaves, Nike sneakers on her feet. She was one of several athletes to attend, including Cam Newton, Dwyane Wade with wife Gabrielle Union, and Tom Brady with Gisele Bundchen on his arm.

This year’s gala theme, “Camp: Notes on Fashion,” was inspired by a seminal 1964 essay by Susan Sontag in which she describes the phenomenon as something that shan’t be talked about: “To talk about Camp is therefore to betray it.”

The theme is chosen for the Costume Institute’s spring exhibition and gala guests are encouraged to take it on. Lady Gaga attends The Metropolitan Museum of Art’s Costume Institute benefit gala celebrating the opening of the “Camp: Notes on Fashion” exhibition on Monday, May 6, 2019, in New York. (Photo by Evan Agostini/Invision/AP)

Karlie Kloss wore a custom gold Dapper Dan-Gucci cocktail dress; singer Anderson .Paak, wearing Gucci, was fanboyed on the carpet by Ferragamo-dressed Taron Egerton, who was asked what his upcoming film character, Elton John, would think of the night’s vibe: “He kind of invented it, right?”

“I used to buy knock-off Michael Kors everything. Now here I am several years later wearing Michael Kors, for me, designed for me.” — Tiffany Haddish

Haddish, in a black-and-silver tiger stripe “Pimperella” Michael Kors pantsuit with wide bells at the ankles, a glitzy hat on her head, said she vowed not to go snackless this year, hence the fried chicken.

“I bring my own snacks because last year I was starving and I learned my lesson,” she said. Of the theme, she declared: “Camping means no panties!” She noted that during her broke days, “I used to buy knock-off Michael Kors everything. Now here I am several years later wearing Michael Kors, for me, designed for me.”

Harry Styles offered a tad of see-through via his custom Gucci organza shirt with black lace, donning a single bee earring and heeled booties. Kacey Musgraves, in custom Moschino, was a proper pink Barbie with long platinum hair, while Gigi Hadid walked with the designer of her look, Kors, offering a silver cat woman style in a swirl-pattern jumpsuit, long coat and helmet-like hat, with long spiked white eyelashes.

Awkwafina breezed through in trophy gold, accompanied by designer Joseph Altuzarra, while others in garish greens, animal prints and metallics soaked up the theme. Some played it safe in more traditional carpet looks, like Hailey Bieber in a lovely, tight pink dress with a daring — but not terribly campy — low back.

Naomi Campbell wore pink with a long, feathered cape, lace leggings and low barely-there neckline. And Joan Collins, perhaps the queen of camp, posed with her in a white puffy gown reminiscent of Scarlet O’Hara.

Kim Kardashian West was dewy in tight, tight, tight couture Thierry Mugler, husband Kanye West stone-faced silent at her side in a Dickey’s zip jacket. Sister Kylie Jenner went for purple from her loose dyed hair to her big feather-muff sleeves, giving partner Travis Scott a peck on the lips as she walked.

Janelle Monae, always evocative on the carpet, balanced multiple hats piled high on her head wearing a pink and black gown with a black-and-white eye covering her breast on one side, courtesy of designer Christian Siriano.

Wintour, who masterminds the gala every year, wore a light pink cape with loose ostrich feathers over a matching gown adorned in a flower sequin design. She told waiting reporters this year’s theme is anything goes.

“I hope they have a lot of fun,” she said of her A-list guests. “The more crazy the better.”