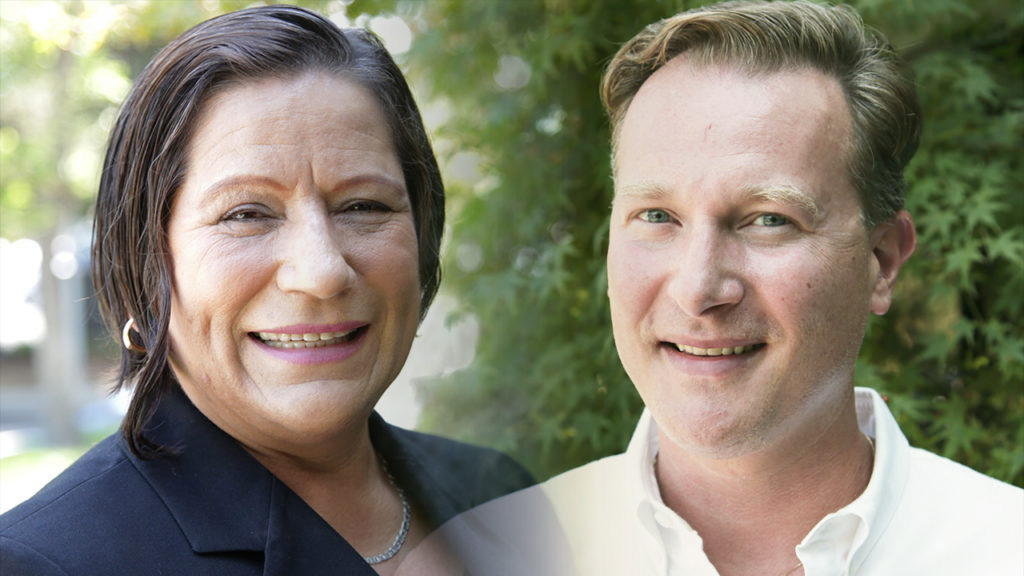 Here is one election prediction you can take to the bank: For the first time in 12 years, a Fresnan will represent what is now District 8 in the California Senate.
That is because both candidates, Andreas Borgeas and Paulina Miranda, live in Fresno.
Borgeas, a Fresno County supervisor, faces Miranda to represent sprawling District 8— an 11-county area spanning from Sacramento to Fresno to Inyo County and the California-Nevada line.
“District 8 has its beating heart in Fresno,” Borgeas said. “Fresno County … would benefit by having someone from Fresno serve and represent us.”
The position pays $107,241 annually and a $192 per diem for each day the Senate is in session.
Current representative Tom Berryhill (R-Modesto) is termed out. He captured two-thirds of the vote against Miranda in 2014.

By any metric, Borgeas is an overwhelming favorite to win.
Experience? Borgeas is a two-term supervisor after serving on the Fresno City Council. This is Miranda’s fifth run at public office. She lost her four previous contests (twice for State Center Community College District trustee and twice for the state Senate).
Fundraising? Borgeas had $433,000 cash on hand at the end of July, according to the Secretary of State. Miranda hasn’t reported any figures, just that she received loans from family members.
Demographics? The district leans heavily Republican, favoring Borgeas. Miranda is a Democrat.

Born in Tijuana, Mexico, to an American father (thus she is an American citizen, too), Miranda moved to Fresno 15 years ago by way of Los Angeles and San Diego.
While growing up, a nun approached her parents, asking them to volunteer one of their daughters for the church. Her parents said no, but the nun then proposed to send Miranda’s older sister to the university instead.
That plan worked, and Paulina followed shortly thereafter. A pharmacist-chemist by trade, she earned her degree from the National Autonomous University of Mexico. She also picked up a masters degree in industrial education.
Miranda more recently worked in the financial sector, including marketing, and as a stockbroker. She also served as a controller and treasurer for the local Democratic Party.
Despite the odds stacked against her, Miranda remains optimistic and says she is running a serious campaign.
“You cannot grow a rose in 30 seconds, because you want it. You need to put water to the roses. You need to give food to the roses. The roses will grow and will grow beautiful,” she said. “I believe in myself.”
Miranda and her husband Mario have three children and four grandchildren.

Borgeas, 44, grew up in Phoenix. He said living in a conservative state helped shape his political views.
“Arizona has been and continues to be a conservative area. And so I think the exposure that I had to politics in those early years, mostly through my father and my grandfather, helped influence my outlook,” Borgeas said.
He graduated with a law degree from Georgetown and moved to Fresno to clerk under federal judge Oliver Wanger.
While in Fresno, he met his future wife Anna. They married and now have two young boys.
“Getting involved in civic affairs was a natural part of just being engaged. And once you’re involved in civic affairs it’s a natural leap to actually aspire to serving. And I felt great about my time in local public service,” Borgeas said.
He won a seat to the Fresno City Council in 2008, serving one term representing northwest Fresno. He stepped up to higher office, winning a seat to the Fresno County Board of Supervisors in 2012, representing mainly the same area. He won re-election in 2016.
When not serving as a supervisor, Borgeas teaches at the San Joaquin College of Law, as well as Middlebury Institute of Internarial Studies in Monterey. He also works as a legal consultant in the educational field but doesn’t actively practice law.

Miranda does not have a campaign website, nor does she list any endorsements.
“For me, the most important things are the voters and I’m working with the voters,” she said.
Borgeas touts his law enforcement endorsements of Fresno County Sheriff Margaret Mims and eight other sheriffs, as well as Fresno Police Chief Jerry Dyer.
“I have a record to run on and I have I have a record of accomplishment, a record of discipline and a person who brings integrity to an office that he holds. And because of that, we’ve been able to earn the endorsement of the entire cross-section of folks you would ever even consider,” Borgeas said.
His top accomplishment: Helping the city of Fresno steer clear from bankruptcy, shortly after joining the elected body in 2009.
Borgeas understands that if he is successful, he would be leaving his supervisorial seat mid-term, creating a special election. That would likely take place in spring 2019. He said he would consider paying for it from his campaign funds.
“I have given that serious consideration to helping out in that process. I don’t know the price that would accompany, that but I’m giving it very serious consideration and we’ll continue to give it serious consideration,” he said. 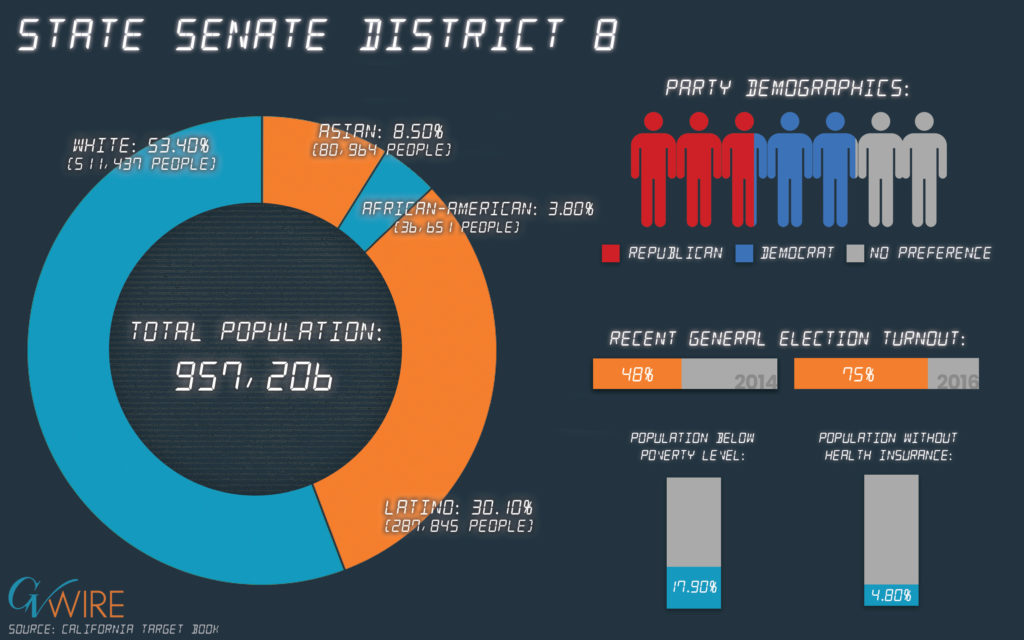 For Miranda, health care is the top priority. She supports universal health care but offered vague answers on how to pay for it. She says the rollout should happen gradually.
“Building the idea, step by step. We don’t have money in California for the health of the people?” she asks. “You don’t have to do it in one year, or six months. You will do it eventually but you need to focus where you want to go.”
Borgeas disagrees.
“I’m waiting for a proposal to come forward from some of the gubernatorial candidates that is not bananas,” he said. “Let’s just put a sober hat on for a moment. An investment in a $400 billion enterprise is not realistically in the cards.”

Improving education is important to Miranda as well. She made an interesting discovery during a recent visit to Cal State Stanislaus in Turlock.
“(Students) told me we are hungry. I just could not believe what they were telling me,” she recalled. “I was very surprised because we are living in the sixth largest economy in the world. I just cannot understand that.”
“I believe in training. I believe in education. I believe that we need to develop the people, the students the workers and also their politicians.”
Borgeas wants to focus on bringing more graduate-level education to the Valley. He says the lack of medical and ABA-accredited law schools create a “brain drain.”
“Promoting the Valley as an area desperately in need of a public medical school or partnership opportunities that might exist between a law school and a university — all these things are part of the process of advocacy and learning how the system can accommodate improvements,” Borgeas said.
Both candidates have different solutions to fund education.
“I am very good with the financial area. I think there is a lot of things you can do when you manage the budget,” Miranda said.
Miranda’s solution is not to cut things from the budget but to “reassign” items. She offered no specific answer on what she would reassign.
Borgeas wants more private funding, in terms of endowments, or private graduation schools.
Both agree, though, that raising taxes is not the best option.
“We don’t need to raise more taxes. I noticed that we are spending a lot of money that sometimes you don’t have to do it,” Miranda said. “But, you have to spend it because if you don’t spend the money that they give you, then the next year you don’t have that money.”

Both candidates are supporting Proposition 6, which would repeal the state’s gas tax hike enacted in 2017.
“Why should do we be increasing the taxes to the people if we can have other options? I will be looking for other options,” Miranda said.
Borgeas says Fresno County already pays extra for road infrastructure with local Measure C.
“I think it’s unfair how we have we are having to shoulder an additional tax burden for the necessities of infrastructure,” he said. “But there is no reason why we should have to pay through double taxation as a self-help county. I think it’s unfair.”

Miranda said she would support SB 54, the sanctuary state bill. Borgeas does not.
“I think it’s time for that people to come out of the shadow with their papers, with their documents so they can live a dignified life like everybody who’s in California,” Miranda said.
For Borgeas, it’s a matter of jurisdiction.
“I believe that the federal authorities have preemptive powers on matters of immigration. They’re not state issues,” Borgeas said.