Twenty-five years ago, a wrestling revolution started on a regional sports cable station.

ECW eventually became Extreme Championship Wrestling, ushering in an era of fast-paced, R-rated style of wrestling. The concepts ECW developed were later adopted by wrestling’s Big Two promotions, WWF (as the WWE was known then) and WCW.

The wrestling landscape in 1993 rested between two historic periods — the Golden Era of the 1980s led by Hulk Hogan and the Monday Night Wars/Attitude Era ahead. Attendance fell, money tightened and shows lacked creativity.

ECW filled a need that hardcore aficionados desired: artistic in-ring action, fan participation (it was common for fans to hand the wrestlers frying pans and chairs to wield as weapons), and a television show perfect for those with short attention spans.

Wrestling fans on the burgeoning internet coveted trading tapes of the ECW TV show, as a chair-swinging, alt-rocking, in-your-face substitute for rival productions.

Watching the first episode of ECW in 1993 provided a dramatically different version of what it would eventually become. It was traditional — matches, followed by interviews with the wrestlers. No one flew off balconies. There were no bloodbaths. The wrestling was mundane compared to how it would improve over the years.

Within months of the first broadcast, ECW found its own style of wrestling and television presentation. “Hardcore Wrestling” aptly described the brand’s more violent style. Its concept of editing and on-screen presentation differentiated it from other shows.

This is the story of ECW’s TV debut.

Philadelphia sports fans didn’t follow convention. They booed Santa Claus and cheered the jarring shot that ended the career of Dallas Cowboys star Michael Irvin. When it came to wrestling, they loved the bad guys and bloody brawls.

The WWF and WCW regularly ran The City of Brotherly Love in the 1980s and 1990s, but there was still room for a local promotion, or “indie” to operate.

Joel Goodhart promoted Tri-State Wrestling Alliance in the early 1990s as a wrestling lover’s dream. Hardcore brawls, the biggest names not tied to the Big Two and lots of blood delighted fans.

But in 1992, TWA went out of business. Tod Gordon was a partner in that promotion. He also ran Carver W. Reed, a Philadelphia pawn and jewelry shop.

Gordon, ever the wrestling fan, revived that style of wrestling just a few months later, creating his own promotion, ECW. His jewelry store helped subsidize his wrestling obsession.

ECW held its early cards in nightclubs. Some were taped to air on local cable access. The promotion used mainly local wrestlers not affiliated with the WWF or WCW, with a big name from the past, like Jim Neidhart or Jimmy Snuka occasionally joining the crew. 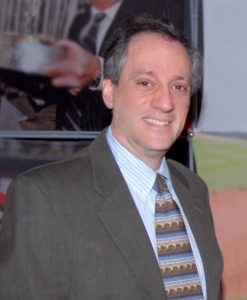 Matt Radico worked in TV production in Philadelphia and was huge wrestling fan. He contacted Goodhart to see if he could combine his two loves. But before a deal could be made, Goodhart’s wrestling promotion folded.

However, Radico learned of Gordon’s efforts to keep Philadelphia wrestling alive at the local level. He reached out and began taping some of those early ECW shows.

“We hit it off. Gordon put a lot of trust in me” Radico said.

Gordon wanted to grow the promotion. Radico had a connection. He knew Sam Schroeder, who worked at a local cable channel, SportsChannel Philadelphia.

“I called them and said we are doing wrestling. It’s going to be well-produced, Philadelphia-centric. It was really a pretty easy sales job on them.”

Schroeder greenlit the project. He was a top cable executive in Philadelphia before dying in 2007.

They taped the pilot November 28, 1992, from the rec center in Kensington, Pennsylvania. While none of those shows made it to broadcast TV, they were eventually released in a commercial set, “The Best of Eastern Championship Wrestling” volumes 1-4.

Nevertheless, SportsChannel picked up the pilot. ECW aired Tuesdays at 6 p.m. for an hour.

“(Schroeder) was our guy, our champion. Good thing he never watched the show,” Gordon joked.

ECW bartered the show, meaning SportsChannel paid no rights fees. Instead, they allowed ECW to keep 12 minutes for themselves to sell.

Some of the early sponsors included Gordon’s Carver W. Reed, Quality Plus Ford Dealers, Soloflex, and a local pizzeria. Soloflex paid $5 for every order it received during the hour the show aired.

When SportsChannel ceased to exist in 1997, the show already could be seen on regional cable outlets throughout the country as well as local syndication.

ECW taped its first episode for air in mid-March 1993 at a local college gym. Radico directed ECW’s TV show and also had a hand in booking that first venue, the Cabrini College Fieldhouse in suburban Radnor.

“That’s where I went to college. The athletic director was the admissions director who admitted me when I was 18 years old. Let me call him to see if we can rent the gym. They were receptive to that,” Radico said.

Gordon said the price was right — free, with some sharing of concessions.

“Our production values were pretty much nil,” Gordon said.

Radico used a standard three-camera shoot, one camera focused on the ring, with two hand-helds.

“I was learning every single day on the fly. Sometimes, they were expensive lessons,” Gordon said.

When It Rains, It Snows

ECW experienced another challenge during the first taping of March 12 — nearly 2 feet of snow. The group canceled a second night of tapings in the same building, scheduled for the next day.

“It was a nightmare. No one could get there. There weren’t 80-100 people in that audience,” Gordon said. “It was empty. Even getting wrestlers from the airport to the facility, a nightmare. How we got them there all on time, I have no idea.”

“If this was a sign of things to come, holy smokes. This is going to get ugly.” — Tod Gordon

“From a technical standpoint, that first night was a disaster. It was one of the toughest things I had to deal with in my career,” Radio said. “I was very grateful we didn’t have to do it two nights in a row.”

The lights Radico used blew out the power in the building, delaying the show’s start.

“We had to leave the house lights on. It didn’t really have the look we were looking for,” Radico said.

“If this was a sign of things to come, holy smokes. This is going to get ugly,” said Gordon.

With the 1992 pilot thrown in the scrap heap, ECW taped three weeks of shows in one evening at Cabrini College.

Jay Sulli served as the play-by-play commentator, with Stevie Wonderful as the color man.

“Sulli was just a fan. He had a booming voice. He couldn’t call a match. Every other word out his mouth was ‘big.’ That is what we went with. We tried to pick and choose as quickly as we can with the amount of talent available to us,” Gordon said.

“The ultimate mark, total wrestling fan,” Radico remembers. Sulli was a friend of Wonderful’s and happened to be at the right place at the right time.

In September 1993, Joey Styles replaced Sulli as the lead announcer — a job Styles kept for most of the next seven-and-a-half years.

The first and all episodes of ECW’s original run can be found on the WWE Network pay service ($9.99/month). Some can still be found on places like YouTube or DailyMotion.

The familiar whistle theme of from “The Good, The Bad and the Ugly” opened the show. Other music used included the theme to the movie “Halloween” and Billy Joel’s “Big Shot.” ECW didn’t pay licensing fees (and you won’t hear any of it on the WWE Network version).

“We had to do something. We wanted to get ahead, make a splash,” Gordon explained. “If they came after us? Our company had no assets. What the hell! We weren’t on the map yet with people noticing or caring.”

The first segment saw Sulli and Wonderful introduce Gordon as ECW president. He was about to introduce a legendary wrestler to the broadcast team. Cue Eddie Gilbert, arrogantly walking onto the set. Instead, Gordon introduced the man who would establish himself as the Hardcore Legend, Terry Funk.

The first ever TV match: The Super Destroyers, with manager Hunter Q. Robbins III, defended their tag team title against a biker-themed duo: The Hell Riders: E.Z. Rider & H.D. Rider (get it? Easy Rider and H.D. as in Harley Davidson?). The masked champions came out on top.

How memorable was that match? Gordon had completely forgotten about it when I asked him for his recollection.

The rest of the show featured names wrestling fans would be familiar with like Gilbert, Snuka, and the Magnificent Muraco, as well many who would soon fade to obscurity (hello, Larry Winters, Rockin’ Rebel and Ernesto Benefico).

One fan review of the show written in 2016 summed up the quality:

“Well the show itself wasn’t all that great. Fifteen minutes of wrestling on a 47 minute show, and none of it very good, is not my ideal form of being entertained. It is however the first episode of ECW and is a must see for that reason alone.”

Usually, wrestling commentary is meant to highlight the promotion, almost to the point of hyperbole.

Funk told it like it was when closing the show.

“I think we have some room for improvement, and we’re going to try real hard for you people out there. Give us some time, and we’ll get better, and so will the crowds,” Funk told the TV audience.

Funk’s words, although probably true, deflated Gordon, who was ecstatic over the completion of his first TV episode.

“I’m beaming, like a headlight on a motorcycle coming down a dark alley. Then, Terry says ‘yeah, that wasn’t too good.’ My heart went like ‘whoosh.’ All the air came out of me like a tire got poked with a pitchfork. I was devastated. I couldn’t believe he said that,” Gordon saids.

Gordon and Funk still kid about that remark today.

“Tod was really a visionary for this. He took a heck of a gamble.” — TV director Matt Radico

Radico left ECW in 1994, after directing more than 80 episodes. He continues in TV production in Philadelphia.

“Tod was really a visionary for this. He took a heck of a gamble,” Radico said.

Today, Gordon continues to run Carver W. Reed, with the fourth-generation of his family, his children Rebecca and Charles.

Gordon says fans from all over the world still stop by the store to reminisce about the heyday of ECW.

Even after the original ECW closed its doors in 2001, its legacy and memory didn’t fade. The WWE eventually bought the rights to the promotion and its tape library.

WWE revived the promotion in 2005 with its own pay-per-view. That lead to the return of a weekly ECW broadcast (albeit produced by WWE) that lasted through 2010.

“Honestly, to this day, it overwhelms me,” Gordon says, 25 years after the first ECW TV show.