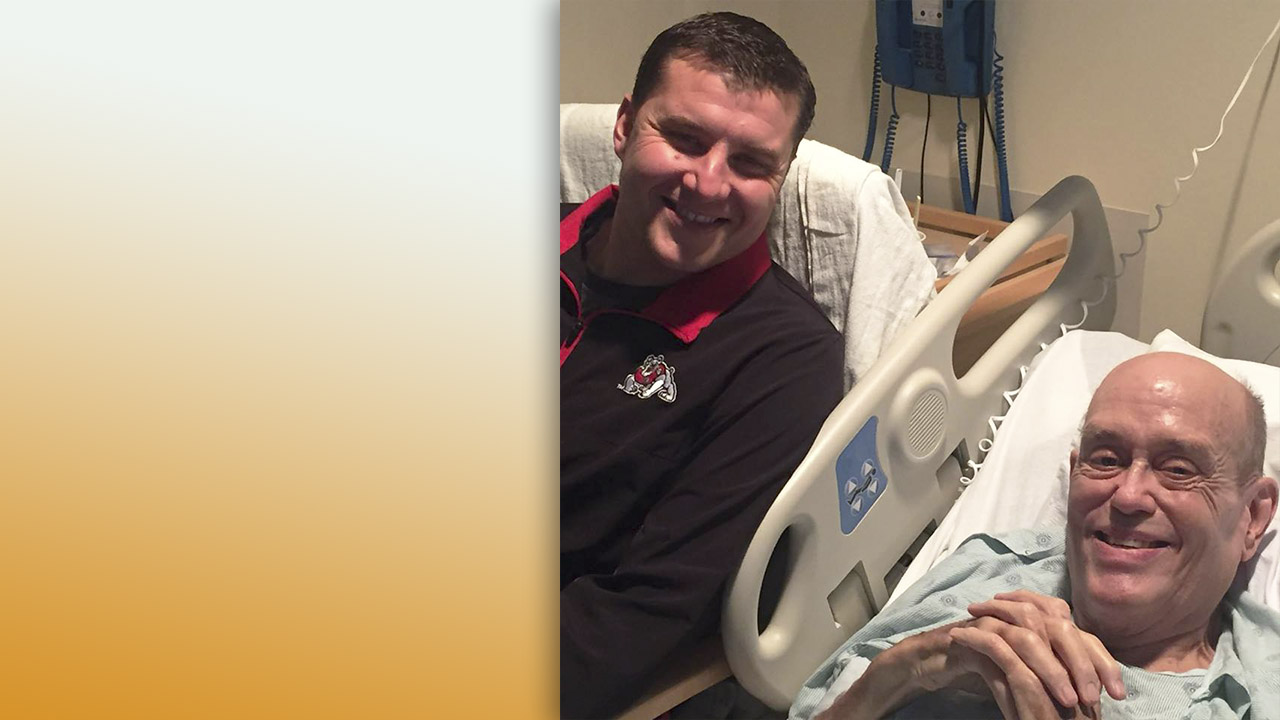 Share with friends
[Update 1/30/2018]:
Paul Loeffler updated his Facebook account today (Jan. 30), thanking his friends for their well wishes. He had four simple messages: patience, prayer, donate, and rejoice in God.
Loeffler, longtime announcer for Fresno State football, men’s basketball and baseball, donated his kidney to friend Michael Alexander.
Loeffler’s message:
Jumping back online to respond to some of your kind and encouraging words, and if I may be so bold, to share a few requests.
1. PATIENCE: there’s a great story to tell, but it’s not my story to tell. Michael Alexander and his family have been living this story daily, and the least we can do is wait until the time is right for them to share it, and give them some time and space to decompress.
2. PRAYER: for Michael and his amazing caregivers – wife Linda and daughter Megan – who will be dealing with significant time demands and physical demands over the weeks ahead as his body gets used to having my krazy kidney hooked up.
3. THINK ABOUT IT: Do you have an organ donor sticker on your driver’s license? Why not? You can’t take ‘em with you, and that little sticker could end up saving multiple lives. In CA, the average wait for a deceased donor kidney is 8-10 years, and 80% of those on the waiting list die before they get one. If everybody reading this right now signed up here we could change that awful statistic in a major way: https://register.donatelifecalifornia.org/register/ If that’s too morbid for you, maybe consider becoming a LIVING donor…and finally…
4. REJOICE: God orchestrated every detail of this process and I know He will continue to do so. If you want to encourage someone, focus on my wife, Tonia, who flies 100 mph through so many seemingly thankless tasks and deals with my crazy schedule; or Mike’s wife, Linda, whose faith has never wavered through all those seeming setbacks which proved to be divine detours on God’s perfect path. Join the Loefflers and Alexanders in rejoicing in God’s faithfulness, incomparable love, and amazing grace. Soli Deo Gloria!

“So blessed to be back home after an unforgettable weekend in San Francisco. God is SO good, and His timing is perfect. Never have I experienced such an overwhelming wave of prayer and encouragement,” Loeffler wrote in a Facebook post.

Loeffler has served as the Voice of the Bulldogs since 2001, starting with baseball. He added football and basketball in 2009. He was behind the mic for the Wonderdogs 2008 NCAA baseball title. Before that, Loeffler served as a sports anchor on Ch. 47.
In addition to his sports broadcasting, Loeffler hosts “Hometown Heroes,” a weekly radio show featuring the stories of local veterans. His commitment to veterans goes beyond the radio show. In 2013, Paul helped launch Central Valley Honor Flight, committed to taking WWII veterans to the National WWII Memorial in Washington, D.C., as part of the Honor Flight Network.
He is also a TV analyst for the national broadcast of the Spelling Bee on ESPN/ABC. Loeffler, himself, spelled his way into the 1990 finals.
Randy Rosenbloom filled in for Loeffler during ESPN 940’s radio brodacast on Saturday of Fresno State’s men’s basketball game vs. Utah State.

Look Up at the Super Blue Blood Full Moon Jan. 31. Here’s What You’ll See & Why.