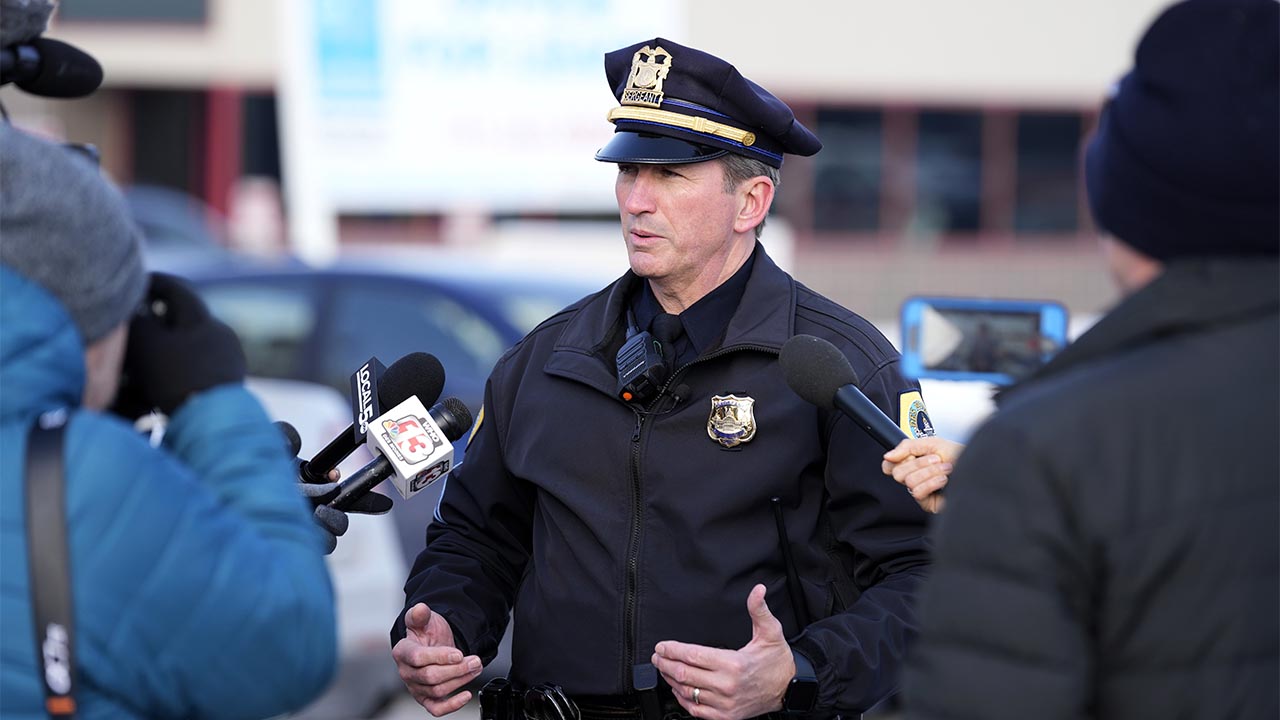 Police say two students were killed and a teacher was injured in a shooting at the Des Moines school on the edge of the city's downtown. (AP/Charlie Neibergall)
Share with friends

DES MOINES, Iowa — Two students were killed Monday and a teacher was injured in what police said was a targeted shooting at a Des Moines school dedicated to helping at-risk youth.

The shooting was at an educational program called Starts Right Here which is affiliated with the Des Moines school district.

Police say emergency crews were called to the school, which is in a business park, just before 1 p.m. Officers arrived to find two students critically injured, and they started CPR immediately. The two students died at a hospital. The teacher who was injured is in serious condition and headed into surgery Monday afternoon.

About 20 minutes after the shooting, police said officers stopped a car that matched witnesses’ descriptions about two miles away and took three suspects into custody. Police said one of the suspects ran from the car, but officers using a K-9 were able to track that person down.

“The incident was definitely targeted. It was not random. There was nothing random about this,” Sgt. Paul Parizek said.

Program Founded by Rapper Will Keeps

The Starts Right Here program, which helps at-risk youth in grades 9-12, was founded in 2021 by Will Holmes, a rapper whose stage name is Will Keeps. He didn’t immediately respond to a message seeking comment Monday.

“The school is designed to pick up the slack and help the kids who need help the most,” Parizek said.

The Greater Des Moines Partnership, the economic and community development organization for the region, says on its website that Keeps came to Des Moines about 20 years ago from Chicago, where he “lived in a world of gangs and violence” before finding healing through music.

The school’s website says 70% of the students it serves are minorities, and it has had 28 graduates since it started. The school district said the program serves 40 to 50 students at any given time.

The Des Moines school district said in a statement: “We are saddened to learn of another act of gun violence, especially one that impacts an organization that works closely with some of our students. We are still waiting to learn more details, but our thoughts are with any victims of this incident and their families and friends.”

Iowa Gov. Kim Reynolds, who serves on an advisory board for Starts Right Here, said she was “shocked and saddened to hear about the shooting.” Des Moines Police Chief Dana Wingert is on the Starts Right Here board.

“I’ve seen first-hand how hard Will Keeps and his staff works to help at-risk kids through this alternative education program,” Reynolds said in a statement. “My heart breaks for them, these kids and their families. Kevin and I are praying for their safe recovery.”

Nicole Krantz said her office near the school was put on lockdown immediately after the shooting, and she saw someone running from the building with police in pursuit on foot and in patrol cars.

“We just saw a lot of cop cars pouring in from everywhere,” Krantz said to the Des Moines Register. “It’s terrifying. We’re all worried. We went on lockdown, obviously. We were all told to stay away from the windows because we weren’t sure if they caught the guy,”