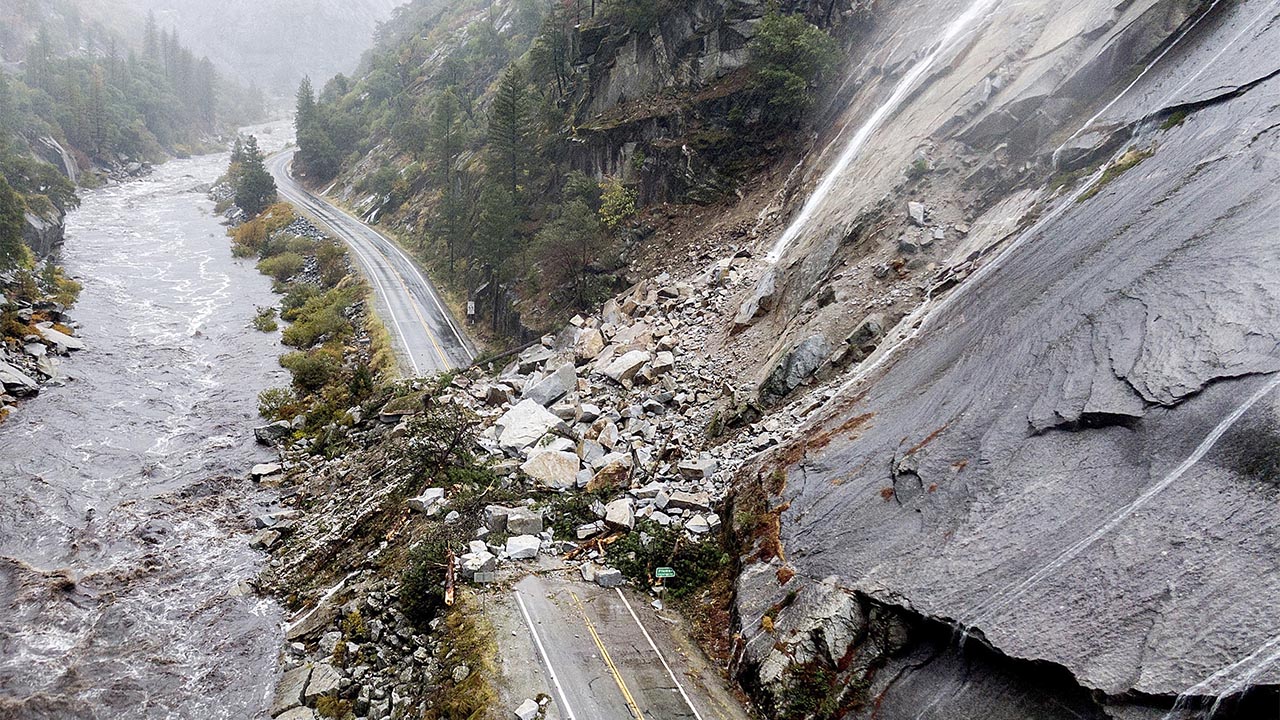 Rocks and vegetation cover Highway 70 following a landslide in the Dixie Fire zone on Oct. 24, 2021, in Plumas County. (AP File)
Share with friends

SAN DIEGO — Relentless storms from a series of atmospheric rivers have saturated the steep mountains and bald hillsides scarred from wildfires along much of California’s long coastline, causing hundreds of landslides this month.

So far the debris has mostly blocked roads and highways and has not harmed communities as in 2018 when mudslides roared through Montecito, killing 23 people and wiping out 130 homes.

But more rain is in the forecast, increasing the threat.

Experts say California has learned important lessons from the Montecito tragedy, and has more tools to pinpoint the hot spots and more basins and nets are in place to capture the falling debris before it hits homes. The recent storms are putting those efforts to the test as climate change produces more severe weather.

Related Story: Fog and Frost Ahead as Waterlogged Valley Starts to Dry Out

Why Is California Prone to Mudslides?

California has relatively young mountains from a geology standpoint, meaning much of its steep terrain is still in motion and covered in loose rocks and soil that can be sloughed off easily, especially when the ground is wet, according to geologists.

Almost all of the state has received rainfall totals of 400% to 600% above average since Christmas, with some areas receiving as much as 30 inches of precipitation, causing massive flooding. The severe weather has killed at least 19 people since late December.

The state’s prolonged drought has made matters worse.

Dan Shugar, an associate professor of geoscience at the University of Calgary, said drought can have a counterintuitive effect when combined with the incredible rainfall California has seen in recent days.

“You’d think if the ground is dry it should be able to absorb a lot of water, but when ground becomes too dry, the permeability of the ground actually decreases,” he said. As water runs off the hardened soil, moving downward and picking up energy, it can begin carrying soil and debris away, he said.

Added to that, wildfires have left some hillsides with little to no vegetation to hold the soil in place. 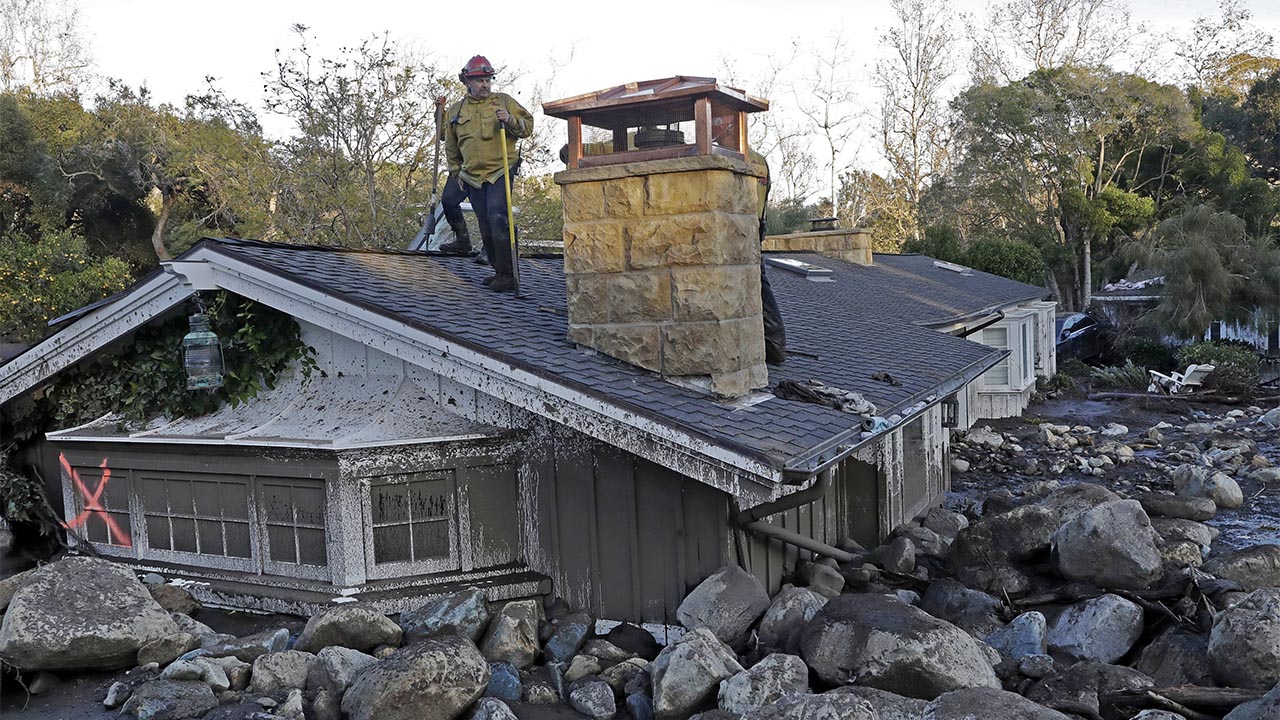 A firefighter stands on the roof of a house submerged in mud and rocks, Jan. 10, 2018, in Montecito, Calif. Experts say California has learned important lessons from the Montecito tragedy, and the state has more tools to pinpoint the hot spots and more basins and nets are in place to capture the falling debris before it hits homes. (AP File)

What Are the Most Vulnerable Areas?

The most vulnerable areas are hillsides that have burned in the past two to three years with communities below them, said Jeremy Lancaster, who leads the California Department of Conservation’s geological and landslide mapping team.

That includes areas that recently burned in Napa, Mariposa, and Monterey counties, he said.

In 2018, the deadly mudslides in Montecito occurred about a month after one of the largest fires in California’s history tore through the same area, charring 280,000 acres.

Montecito is sandwiched between the Santa Ynez mountains and the Pacific coast. On the fifth anniversary of that tragedy, the entire community was ordered to evacuate on Jan. 9 as rains pummeled the area and debris blocked roads.

Lancaster warned that the threat of landslides will linger long after the rains have subsided as the water seeps 50 to 100 feet into the soil, dislodging things.

“They can occur weeks later, if not months,” he said.

What Can Be Done to Protect Communities?

Lancaster said California has dramatically increased its efforts to identify hotspots since the Montecito mudslides. His department continually updates its map so local communities are aware and can make decisions, including whether to evacuate an entire community.

The state is also working on a system to better pinpoint how much rain might trigger a landslide.

Marten Geertsema, who studies natural hazards and terrain analysis at the University of Northern British Columbia, said agencies use a variety of tools to gauge the likelihood of landslides in a given area, including terrain maps and lidar – pulsed light from lasers to penetrate foliage to see the ground. Then they can watch for early warnings, such as changes over time in photos taken from the air, or from satellites, or in data from GPS monitoring stations, tilt meters, and or other on-site instrumentation.

What Is the Most Effective Defense Against Mudslides?

One of the best ways to manage landslides is with debris basins – pits carved out of the landscape to catch material flowing downhill.

But basins, which can require a lot of land, can also disrupt the natural ecosystem and lead to beaches needing to be replenished by collecting sediment that flows out of the canyons, according to experts.

And they are costly, said Douglas Jerolmack, a professor of environmental science and mechanical engineering at the University of Pennsylvania. And if old debris isn’t removed, they can be overwhelmed by new landslides or mudslides.

Some might also not be big enough to deal with future slides worsened by climate change, Jerolmack said.

After the 2018 mudslides hit Montecito, the Los Angeles Times reported that debris basins above the community were undersized and hadn’t been sufficiently emptied.

The tragedy galvanized the community, which raised millions to address the problem, said Patrick McElroy, a retired Santa Barbara fire chief who founded the nonprofit organization, The Project for Resilient Communities.

The organization hired an engineering company to map the canyons and installed debris nets. He said the recent storms put them to the test: One net measuring 25 feet tall filled nearly to capacity.

McElroy said he’s still haunted by memories from 2018 but feels better, knowing that the community might be safer now.

“I’m not over it yet. But to wake up, you know, the other day and see no injuries and no fatalities. I just can’t tell you how impressed I am,” he said of the nets.

The best solution for the Montecito and Santa Barbara area is to have both nets and debris basins, according to Larry Gurrola, the engineering geologist hired by the organization.

But nothing is cheap. Santa Barbara County has spent $20 million on a new basin after 2018, while McElroy’s organization spent close to $2 million on installing the nets, which includes liability insurance and other fees. They have a five-year permit for the nets, which will be removed if it is not renewed.

Gurrola said the alternative is more costly. With the recent storms, more than half of California’s 58 counties have been declared disaster areas and repairing the damage may cost billions of dollars.

“Most importantly these things protect the community and save lives,” he said.

On King’s Holiday, His Daughter Calls for Bold Action Over Words