Yellen Tells Congress US Will Hit Debt Limit on Thursday 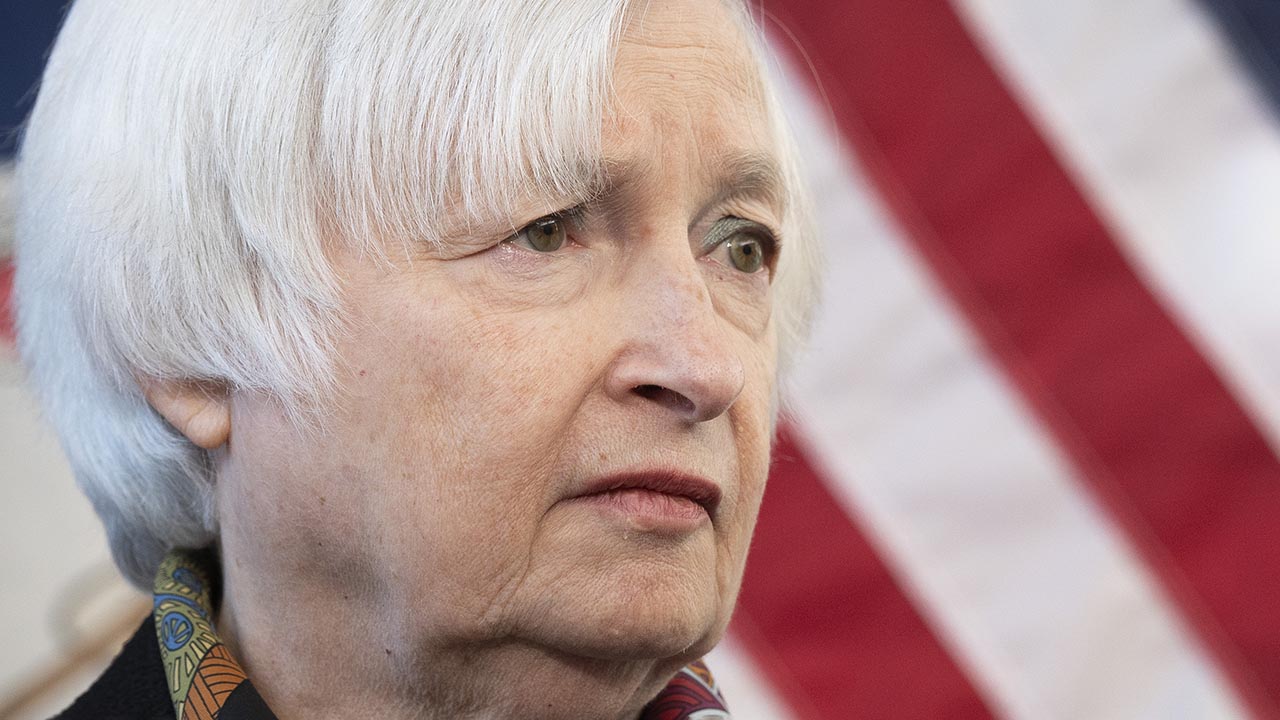 Treasury boss Janet Yellen notified Congress the U.S. is projected to reach its debt limit Thursday and will then resort to “extraordinary measures” to avoid default. (AP File)
Share with friends

WASHINGTON — Treasury Secretary Janet Yellen notified Congress on Friday that the U.S. is projected to reach its debt limit on Thursday and will then resort to “extraordinary measures” to avoid default.

In a letter to House and Senate leaders, Yellen said her actions will buy time until Congress can pass legislation that will either raise the nation’s $31.4 trillion borrowing authority or suspend it again for a period of time. But she said it’s “critical that Congress act in a timely manner.” 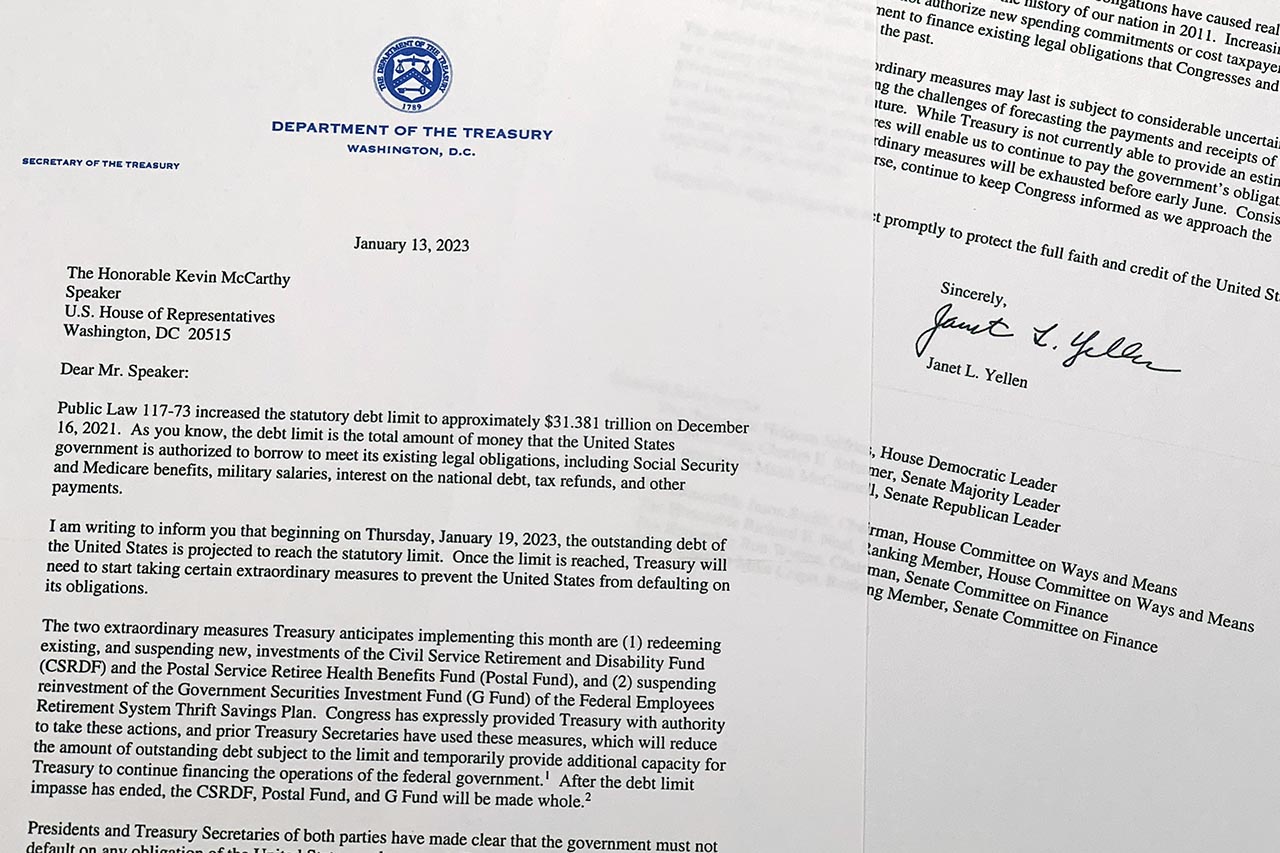 The letter from Treasury Secretary Janet Yellen to House Speaker Kevin McCarthy of Calif., photographed Friday, Jan. 13, 2023, notifying Congress that the U.S. is projected to reach its debt limit on Jan. 19, and will then resort to “extraordinary measures” to avoid default. (Jon Elswick/AP)

“Failure to meet the government’s obligations would cause irreparable harm to the U.S. economy, the livelihoods of all Americans, and global financial stability,” she said.

“In the past, even threats that the U.S. government might fail to meet its obligations have caused real harms, including the only credit rating downgrade in the history of our nation in 2011,” she said. Yellen was referring to the debt ceiling impasse during Barack Obama’s presidency, when Republicans had also just won a House majority.

In this new Congress, the debt ceiling debate will almost certainly trigger a political showdown between newly empowered GOP lawmakers who now control the House and want to cut spending and President Joe Biden and Democratic lawmakers, who had enjoyed one-party control of Washington for the past two years.

The White House has insisted that it won’t allow the nation’s credit to be held captive to the demands of GOP lawmakers.

“We have seen both Republicans and Democrats come together to deal with this issue,” White House spokesperson Karine Jean-Pierre told reporters Friday. “It is one of the basic items that Congress has to deal with and it should be done without conditions.”

House Republican leaders liken the debt ceiling to a credit card limit and have said they would only raise the statutory ceiling if doing so also secures a spending overhaul.

New House Speaker Kevin McCarthy told reporters in his first press conference that he had a “very good conversation” with Biden about the coming debt ceiling debate. “We don’t want to put any fiscal problems to our economy and we won’t, but fiscal problems would be continuing to do business as usual,” he said.

‘We’ve Got to Change the Way We Are Spending Money’

McCarthy has floated the kind of budget-cap deal that was engineered in the last go around on the debt ceiling during the Trump administration, which would involve capping federal spending levels in return for the House votes needed to raise the debt limit.

But any effort to compromise with House Republicans could force Biden to bend on his own priorities, whether that’s money for the IRS to ensure that wealthier Americans pay what they owe or domestic programs for children and the poor.

Senate Majority Leader Chuck Schumer and new House Democratic leader Hakeem Jeffries said in a joint statement Friday that “a default forced by extreme MAGA Republicans could plunge the country into a deep recession and lead to even higher costs for America’s working families on everything from mortgages and car loans to credit card interest rates.”

They said the two parties worked together to increase the debt limit three times when Trump was president and Republicans had majorities in the House and Senate. “This time should be no different,” the Democratic leaders said.

Shai Akabas, director of economic policy at the Bipartisan Policy Center, told reporters Friday that “this is not the time for panic, but it’s certainly a time for policymakers to begin negotiations in earnest.”

“Most policymakers agree that we have a major fiscal challenge as a country, our debt is unsustainable,” he said, and “there’s no reason why we couldn’t agree on measures to improve our fiscal outcome, and also ensure that we are paying all of our bills in full and on time.”

Treasury first used extraordinary measures in 1985 and has used them at least 16 times since, according to the Committee for a Responsible Federal Budget, a fiscal watchdog.

Related Topics:CongressDebt Ceiling
Up Next