Duarte's Priority Is Valley Water, not Being a Trumper
Share with friends

Fresno City Council President Nelson Esparza will stand trial for allegedly attempting to extort the city attorney. However, a judge reduced the most serious charge from a felony to a misdemeanor.

Judge Brian Alvarez ruled at a Tuesday preliminary hearing there is enough evidence for Esparza to answer the charges related to an April 22, 2022 conversation with then-city attorney Douglas Sloan. A misdemeanor violation of the city charter also stands.

“It’s really no sweat off our back. We are obviously happy and agree with the court’s decision to remove the felony to a misdemeanor,” Esparza told reporters after the hearing. “Taking a look, reflecting back on my short career of public service thus far, no one’s ever really given me a free pass. There’s always been challenges along the way, and this time is no different.

Esparza continued to call the charges against him political in nature.

“We’ve always overcome and will overcome this time as well. We saw the prosecution put on their star witness with no evidence during this very preliminary portion of the proceedings. So that really should speak to how flimsy and politically charged this case is and continues to be. So ultimately, we’ll continue to look forward to being back here and proving her innocence in a trial,” Esparza said.

The case will now head to a Dec. 12 trial date, with a Dec. 5 trial setting conference.

Defense attorney Mark Coleman intends to call Esparza to testify at the trial.

Prosecutor Victor Lai had no comment about why he did not fight the request to reduce the charge. 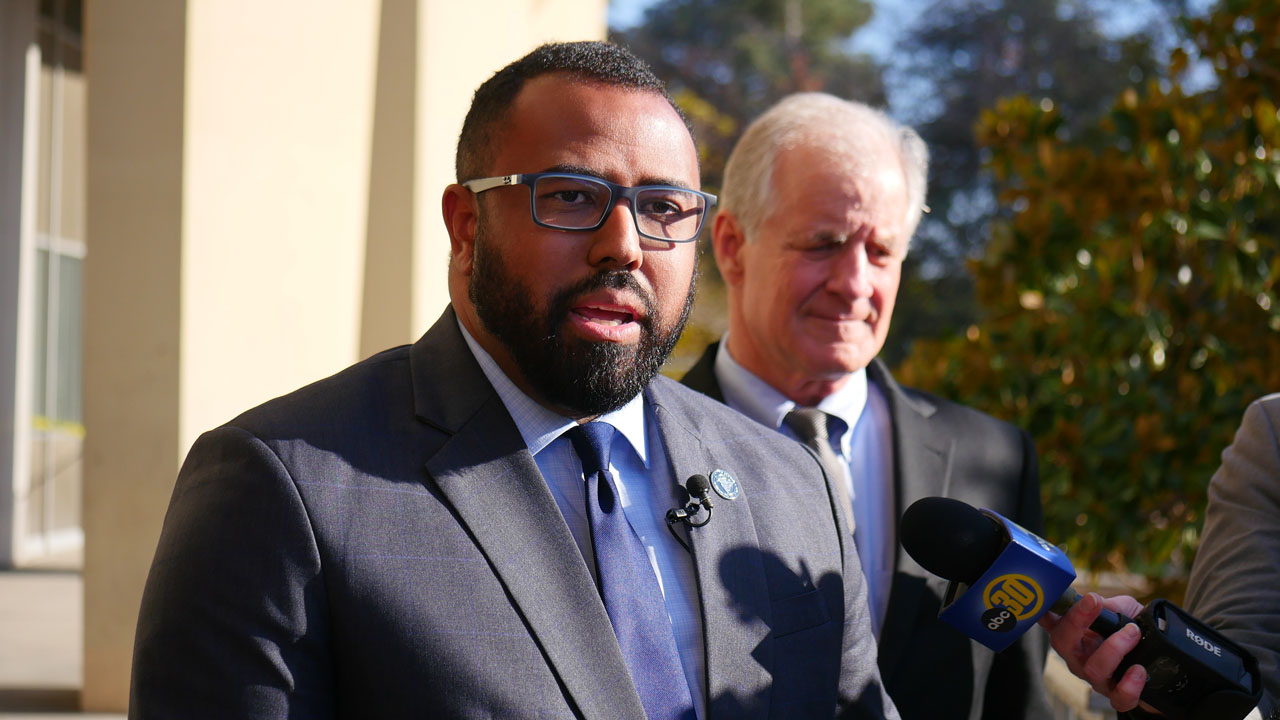 Fresno City Council President Nelson Esparza speaks to the media after being ordered to trial. His attorney Mark Coleman stands behind him. (GV Wire/Jahz Tello)

The prosecution alleged that Esparza met with Sloan on April 22, one day after the City Council discussed Sloan’s job performance in a closed session. Sloan and City Councilman Miguel Arias testified it was a positive evaluation, but Sloan’s requests for a 5% raise and more vacation time were not decided.

The council also voted on April 21 in open session 7-0, to prevent any city councilmember from “weaponizing” the city attorney’s office — meaning the city attorney would have to go to the entire City Council to investigate accusations of wrongdoing by an individual member.

Sloan once again testified as to what Esparza told him.

“Council President Esparza said to me, ‘I’m just going to cut to the chase. I’m standing between you and you losing your job. From now on, you will work only for the council majority.’ And I said, So what do I do if the others ask me to do something? He said, Come talk to me. And then I said, Where’s Luis (Councilman Luis Chavez) on this? And he said, It doesn’t matter,” Sloan testified.

The city charter says the city attorney works for all councilmembers.

The meeting with Esparza so disenchanted Sloan, he said it led him to pursue a job he was already considering as the Santa Monica city attorney.

“I felt disrespected that somebody would ask me to violate the charter especially after having been a lawyer for 34 years. When I left that meeting, I went and called the mayor of Santa Monica,” Sloan said.

Sloan also spoke with others in the City Attorney’s Office and City Manager Georgeanne White about the Esparza incident. He said he did so in seeking letters of reference for the Santa Monica job. He also asked others to keep the discussions quiet, so as not to affect his chances.

During cross examination, Coleman asked how practical Esparza’s demand would be, since a majority of the council is needed to fire the city attorney.

Sloan said Esparza had that influence, and that his request was “egregious.”

Coleman repeatedly asked why Sloan did not ask Esparza to clarify his remarks.

“I did not analyze it that far. I took him at what he said. At that point, I decided I wasn’t going to stay, anyway,” Sloan testified.

Coleman asked Sloan, “Nelson, if anything, is a smart man, right?”

“I don’t want to give you my opinion on that,” Sloan replied.

In closing arguments, Esparza’s defense argued that because the prosecution could not prove Esparza’s intent to commit a crime, the case should not head to trial. There was no way Sloan could interpret Esparza’s words as a threat, since he received a positive evaluation the previous day; and he should know that Esparza could not unilaterally fire Sloan.

Alvarez disagreed, ruling enough evidence existed to advance the case to a trial.

“The Court does credit Mr. Sloan’s testimony for this hearing, however. The circumstances and context, we support the belief that, again, an exceedingly low standard has been met,” Alvarez said.

After the hearing, Coleman criticized Sloan.

“He completely shirked his responsibility to the city of Fresno. By not clarifying the confrontation. He violated the resolution by not taking it to the council. He intentionally deprived the City Council of the opportunity to investigate this. He circumvented the whole process, and I believe he circumvented his ethical obligation as an attorney,” Coleman said.

Coleman called the reduction to a misdemeanor “a big win.”

If convicted, Esparza now could face up to one year in jail instead of up to three years in prison. He could still be in jeopardy of losing his council job.

City Charter Sec. 305 (a) says a vacancy occurs when a councilmember “is convicted of a felony or of an offense involving a violation of his or her duties.”