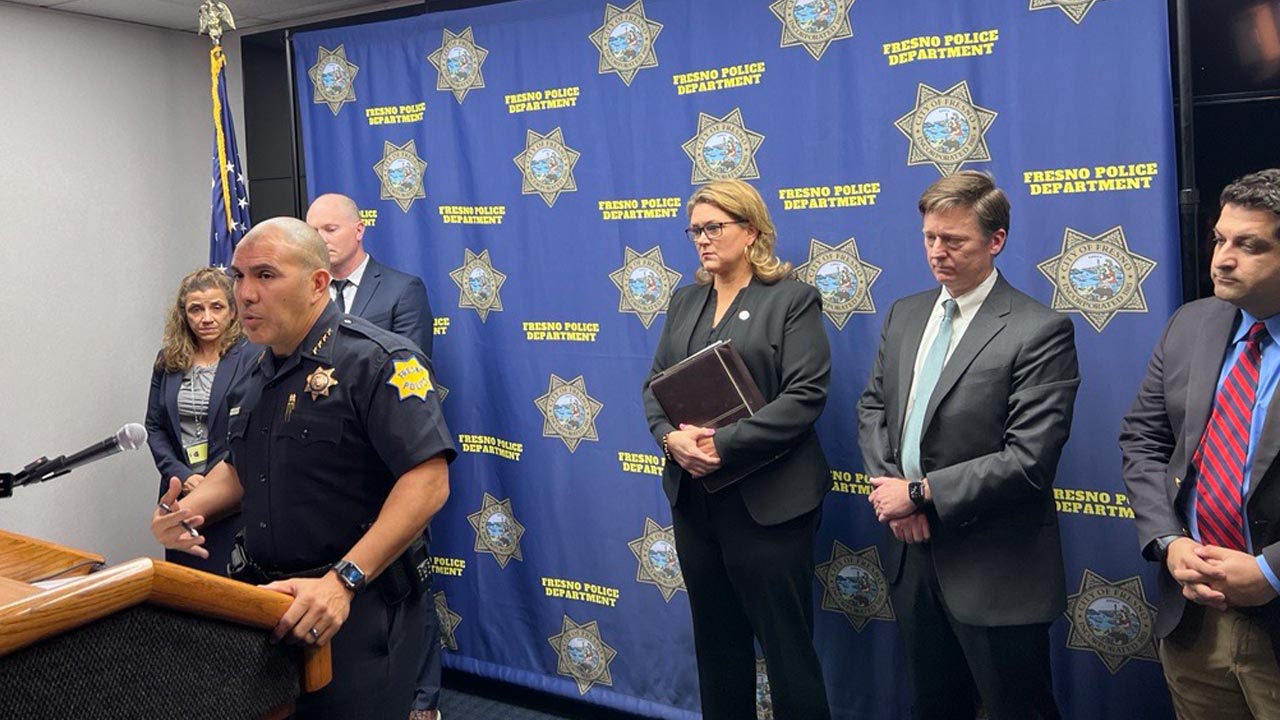 A hoax phone call that falsely claimed that two people armed with AR-15 rifles were shooting students at Bullard High School caused widespread panic across the city Wednesday, with some parents speeding to the northwest Fresno school site in fear for their children even as a massive force of Fresno Police combed the campus.

At a news conference Wednesday afternoon, Fresno Police Chief Paco Balderrama said that officers entered the school four minutes after the 911 call was logged at 11:56 a.m. and determined within four more minutes that no shootings had occurred.

Balderrama was joined at the news conference by federal and county law enforcement officials to discuss the police department’s response and provide details about the incident, which initially was widely reported on social media as an active shooter event. Those reports prompted the Fresno Police Department and Fresno Unified School District to take the unusual step of putting out prominent social media posts about the hoax.

We DO NOT have an active shooter & NO ONE is hurt at Bullard High School or any other school in Fresno. This was hoax call and there is no danger. Bullard & Gibson Elementary are currently on lockdown and officers are on scene.

We will continue to updated our social media. pic.twitter.com/aMDhQYR9HD

Fresno was not the only city with a hoax call on Wednesday. Numerous calls were logged across the state, in Stockton, Chula Vista, Santa Barbara, Santa Rosa, and Lancaster, and came a day after a similar call caused police to respond to Nishimoto Elementary in Madera, causing investigators to consider whether they are part of a coordinated effort to see how police respond to active shooter reports, Balderrama said.

He said investigators are trying to learn whether the calls came from outside the country.

The Bullard hoax call was initially placed to State Center Community College District, which transferred the call to Fresno Police, the chief said.

With last spring’s mass shooting at a Uvalde, Texas elementary school, where police waited more than an hour before entering the school, the Fresno police response was appropriately speedy, Balderrama said.

But the massive response of dozens of personnel meant that other parts of the city were under-patrolled for a period of time, he said.

Fresno County District Attorney Lisa Smittcamp said she first heard reports that Bullard might be under attack from her 80-year-old mother, who has no children or grandchildren at Bullard, but like many in Fresno is concerned for the welfare of the city’s young people.

“Even though we’re grateful today that it is a hoax and that no one was injured, no one was shot, no one was killed, we now have thousands of victims,” Smittcamp said. “We have over 2,500 students at Bullard. We have a faculty, I’m guessing, of over 200 people. We have the entire Fresno Unified community. We have friends and family members of these students who are traumatized.

“Some of these Bullard students were at a shooting at a football game last year, last football season. And I’ve talked to parents, spoken to parents whose children were at that football game. They are traumatized over this, after what happened in Uvalde and what’s happened in so many other jurisdictions all throughout the nation.”

Smittcamp noted that even though the incident caused widespread panic and could have led to serious injuries — Balderrama said a police captain was nearly “T-boned” by a parent speeding to the scene — if investigators are able to determine who made the call, prosecutors could only charge the person with a misdemeanor.

She described the hoax call as yet another indication of the little regard that lawbreakers have for the law because legal consequences have become insignificant in California.

Smittcamp urged parents and community members to consider what she called the state’s lax legal system at election time, and to put pressure on Senate and Assembly members to stiffen laws.

“With all of this anti-accountability in the law, it actually encourages neglectful and reckless and criminal behavior,” she said.

Even though under California law such hoax incidents can be charged only as a misdemeanor, federal officials could seek felony charges “which in appropriate circumstances we will consider,” Assistant U.S. Attorney Kirk Sherriff said at the news conference.

In addition to wasting police resources in response to the hoax, the school district also has had to devote extra resources, such as sending a trauma team to Bullard starting Thursday, not to mention the massive disruption to teaching and learning, Superintendent Bob Nelson said.

He said students should still be encouraged to speak out when they are aware of potential for violence in time to stop it, but they and their parents would be held responsible if students participate in hoaxes.

There apparently was some confusion on the part of the high school, which initially sent out a message to parents that the police were responding to a report of a loud bang. That message was soon followed by another message from the school to parents that police had responded to a false report of an active shooter situation.

Nelson could not explain why the initial message referred to a loud noise.

As to whether Wednesday’s incident might make school officials reconsider a proposed cellphone ban at Bullard, Nelson said it will be part of the ongoing conversation, but he noted that the decision of whether to implement the ban is still up to the school’s principal, Armen Torigian.

Nelson said he had even wondered whether the person calling in the hoax might be among those who are opposed to the new cellphone policy, which would require students to keep their smart phones and other devices locked in a magnetically sealed pouch during the school day.

“I rely upon our principals being present with their community in meaningful ways to understand what that community needs. And my job is not to kill ideas when they first get fomented. I think you have to take a restock …. and yeah, the (school) site will have to weigh this factor against other factors.”