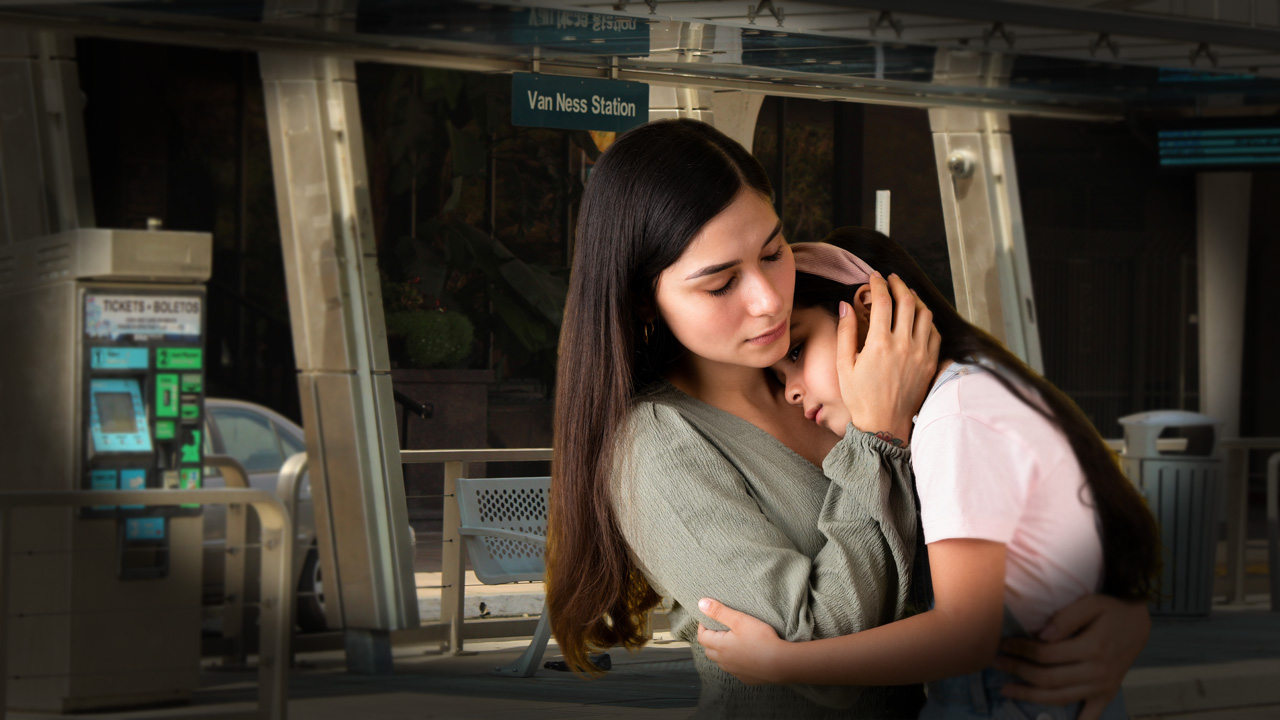 Getting medical help can be a challenge for Hispanic families from rural areas who find driving in downtown Fresno confusing. (GV Wire Composite/Paul Marshall)
Share with friends

Growing up in Orange Cove, when my family needed to see a doctor or a specialist, the hardest hurdle was always finding a ride. 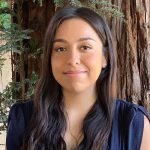 My mother, who immigrated from Mexico, never learned how to drive and, after more than 20 years of living in the U.S., her knowledge of English is limited to a few words.

When I was younger, my father was the sole provider for our family. He often worked long days picking fruit, driving from one vineyard or orchard to the next as the season changed.

Most of the time, he could not afford to take a day off work to drive me, my brother, or my mother to the doctor. Thus, my mother was often left with the task of finding a ride — it was never easy.

Searching For a Ride

During my younger years, my mother would often rely on the kindness of neighbors for a ride if one of our family was ill.

The local community clinic was only a few minutes away and, for the most part, a friend or neighbor would be more than happy to give us a lift. And, there was also the local transit bus.

However, getting medical care beyond the town limits was a huge challenge.

Some people would be willing to give us a ride to Reedley or Dinuba, but downtown Fresno? Forget it.

Some would say they didn’t feel comfortable driving so far. Others told us their car wasn’t reliable enough to make the long drive. Some had no idea how to navigate the city of Fresno, (this was the ’90s before GPS and internet in our phones), and others said the trip would take too much time out of their day.

What It’s Like to Reach CRMC From Orange Cove

When I turned 6 years old, my mother began having troubling health issues beyond the scope of our local doctor.

I would get out of school earlier than my brother did, and because my father would get out late from work, I had no one to pick me up. So, my mother dragged me along with her.

For the next year or two, I would miss at least one day of school a month for the trek to Fresno with my mom. 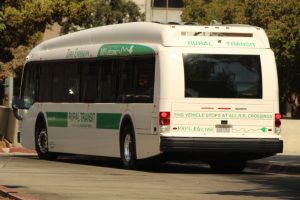 In those days, — and still the case today —Fresno provides one daily bus route to Fresno from Orange Cove (Monday through Friday) and it’s how Mom and I reached her doctor appointments.

We would get up before dawn, my mother would pack our lunches, and we would be off to wait at the only bus stop in town at 6 a.m.

We’d make it to the courthouse drop-off around 8 a.m.

From there, we would walk to CRMC with my mother reminding me every few blocks to take note of the street signs because she wasn’t sure she would be able to remember the way back to the bus stop.

It was a whole new world for her and me, full of one-way streets we didn’t understand. We sure weren’t in Orange Cove anymore.

My mother’s appointments lasted about an hour give or take, and the rest of the day was spent hanging around the bus stop until the bus arrived to pick us up sometime at about 6:30 p.m. 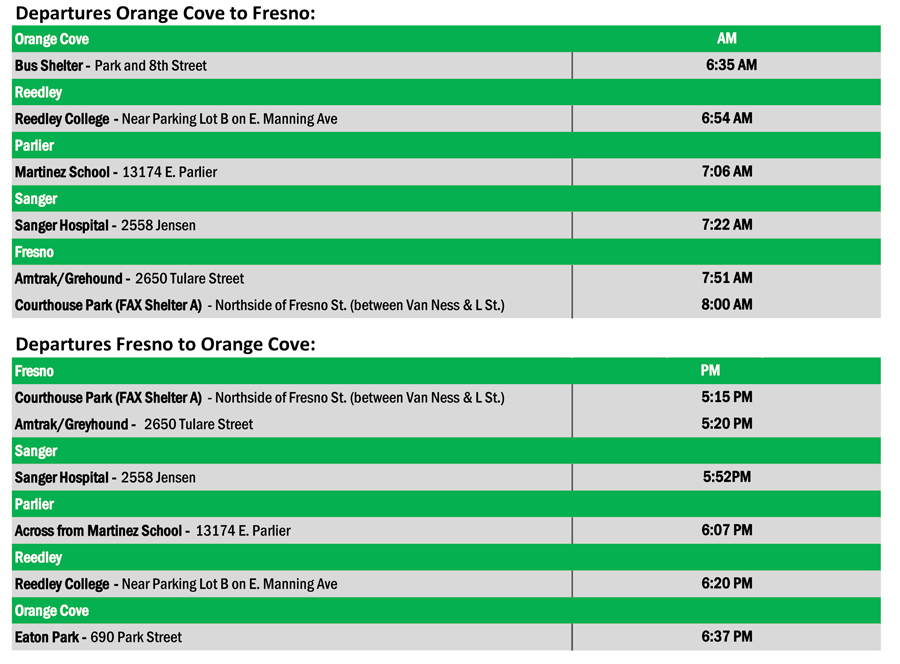 Downtown Fresno is Hard to Navigate for Many

As I got older, my mother thankfully recovered from her health issues, and my father was able to get a better job that provided paid sick leave and personal time off. Taking Mom to doctor appointments became less difficult.

Nevertheless, my father dreads any trip that involves downtown Fresno.

Here’s the thing: Driving into downtown is daunting for many people, especially for those who have lived in small country towns their whole life.

My father, who taught me how to drive, finds any way he can to get out of driving downtown. I remind Dad that using the GPS on his phone will take him to where he needs to go. But he doesn’t think it’s reliable, and it confuses him more than it helps him.

He has gotten out of jury duty by stating that he only speaks Spanish even though he knows perfect English. The prospect of jury service frightens him because he gets confused by downtown’s parking garages and the one-way streets. And, he’s not the only one. 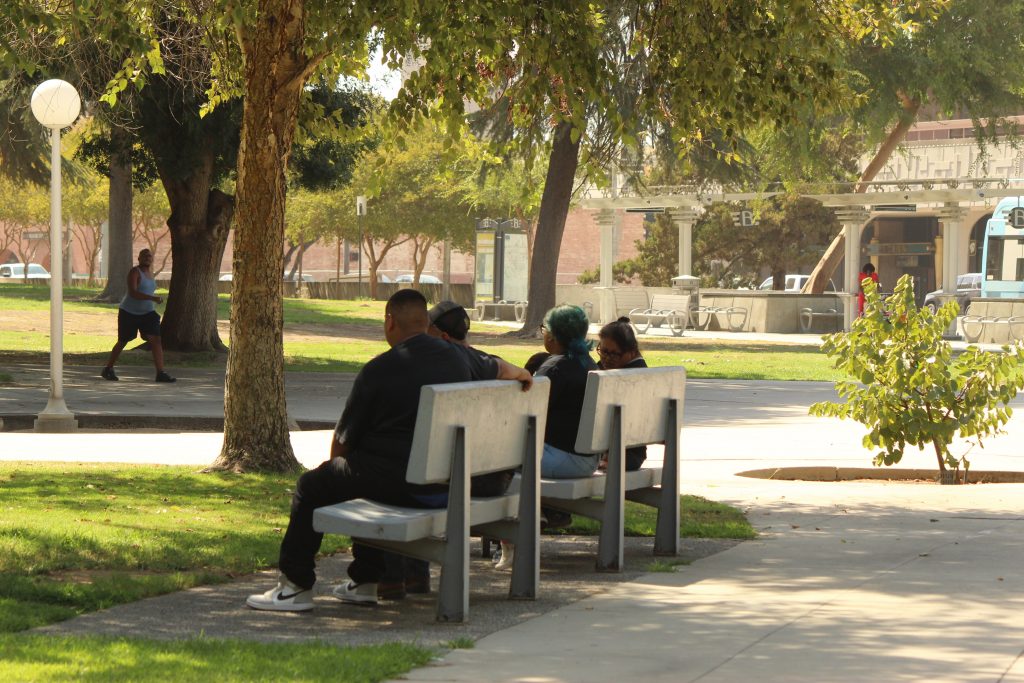 A bench under the shade in front of Fresno County’s downtown courthouse where families wait for the evening bus ride back home. (GV Wire/Liz Juarez)

Other immigrants are like my father. Many who migrated to the U.S. from Mexico, El Salvador, or Guatemala have no idea of what downtown is because they grew up in rural small towns.

Driving to Clovis Is Easier for Some Rural Residents

A few years ago, my grandfather was diagnosed with cancer and spent a whole year receiving chemo treatments at Clovis Community Medical Center.

My aunt and uncle, who drive just fine on country roads, came to his rescue, as did Dad. And it didn’t take long for them to memorize the route to the Clovis hospital.

Unfortunately, after my grandfather finished his chemo treatments, he suffered a brain aneurysm and was transported to CRMC.

It then became my responsibility to check in with his doctors during the week and pick him up from the hospital because no one else felt safe driving downtown.

I would sometimes have to miss class or work to drive my grandfather to his check-up appointments.

My story isn’t unique. Many first-generation Mexican-Americans like myself who grow up in rural areas often find themselves in these situations.

When I graduated high school, I decided to forego moving out of state for college, because I knew how much my parents and grandparents relied on me for help.

Leaving them would have felt like I was abandoning them.

The fact is, rural areas continue to be overlooked and it can often take a village to get a mom, grandma, or grandpa to the doctor without help from someone else.

I share all this to bring awareness to the public transportation struggles, language barriers, and lack of educational opportunities in rural Valley towns like mine.

Funds going to one hospital instead of another is not about Clovis versus Fresno. It’s about accommodating those in rural forgotten areas. They need medical care as much as those living in or near downtown Fresno.

Poor people don’t just live in downtown Fresno. They live throughout the Central Valley and, more often than not, they need just as much or more assistance than someone in Fresno.

One could argue that Clovis and downtown Fresno may only have a 10-minute difference for those coming from Fresno County’s eastern rural areas. However, one offers an easier route to medical care, and that can make a life-saving difference for someone who struggles to drive on a major highway or understand the GPS navigation on their phone.