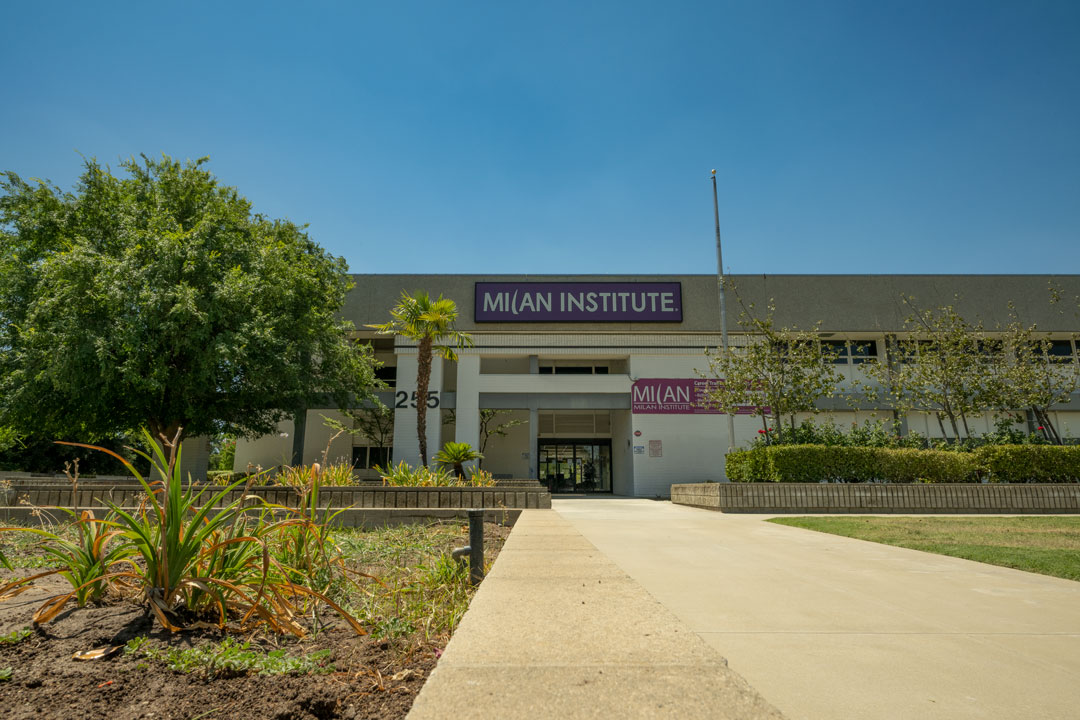 The Marjaree Mason Center is considering a purchase of the former Milan Institute on Bullard Avenue near Blackstone. (GV Wire/Albert Baker)
Share with friends

Neighbors in north Fresno are concerned about the future use of a former trade school located adjacent to homes on Bullard just west of Blackstone.

The Fresno Planning Commission will discuss changing zoning for the empty campus at 255 W. Bullard Avenue that was most recently used to house the Milan Institute of Cosmetology. Neighbors say such a change could lead to its use as a shelter.

Milan was leasing the property, but moved to a new location in Clovis in August 2021. Campus director Mark Balanon said among the reasons for the change included the age of the building, and a problem with homeless people “hanging out” in the parking lot.

Marjaree Mason Center, one of the area’s leading service providers for domestic violence victims, is considering buying the location, for its main office and to house clients.

In a statement to GV Wire, MMC says their current downtown facility does “not match the current demand for services.” The “center” is spread across multiple offices in the city.

“We need a location with adequate space to bring the MMC staff working within the City of Fresno to a central location as we continue to serve those in Fresno County affected by the trauma of domestic violence,” MMC spokeswoman Charity Susnick said in an email.

MMC said the Milan campus is ideal because of its location — one-third of a mile from Blackstone Avenue — and near freeways, public transportation, and medical services.

“Our desire for the space would be to use the existing building on the property as an expanded, 24/7 Community Resource Center and MMC office space. This includes 24/7 hotline, crisis response and client intake, case management, mental health services for adults and children, classes including S.A.F.E. group and legal options and a large meeting room to train community partners. Additionally, we would hope to eventually construct confidential, safe, temporary emergency housing for adults and their children that are unsafe in their own home due to domestic violence,” Susnick said.

Funding for the project would come from private and public sources, MMC said. Susnick reiterated that a purchase has not been completed, nor any proposal submitted.

Even with a potential new location, MMC says it will still operate downtown.

There have been at least three community meetings regarding the project in the past two weeks.

At one meeting, resident Rodney DeLara said the city pushed the benefits of the potential rezone.

“I felt like I was being sold a car by a used car salesman. I just didn’t believe any of it. The city has been really unforthcoming. They’ve lied to us and bullied us,” DeLara said.

While DeLara and others in the neighborhood say they support the MMC, they are concerned about property values and safety.

Both the city and MMC say they have supporters.

“At the (June 29) meeting, the property owner provided additional information relative to a prospective buyer and future tenant for the subject property. Members of the community as well as the Fresno Police Department were there to speak in favor of the proposed buyer and use. The public had the opportunity to ask questions that were answered directly by the property owner and the interested buyer,” a city staff report says.

One of the neighbors in support is Nasreen Johnson, also a trustee with the State Center Community College District. She has lived in the area for 10 years.

“(It) is a stellar organization and they have a good track record and they provide a really necessary and much needed service to our community. And I have no concerns even with me and my children living so close,” Johnson said.

Public comments submitted before the community meetings complained about the lack of transparency and other concerns. The city has received eight emails since May, all oppose the project.

Current zoning allows the Milan campus site to be used only for educational purposes. A zoning change is required for MMC to use the property as they envision.

The commission meets in person and on Zoom on Wednesday at 6 p.m. Commissioners will have the options to either accept or deny the rezone from Public and Institution/Conditions of Zoning (PI/CZ) to just PI, or to add other conditions for use.

The agenda, with a link to the Zoom portion, can be found here.

The Fresno City Council will have the final say on the rezoning.