Could Fresno State play in the Pacific-12 Conference?

After the seismic move of UCLA and USC to the Big Ten Conference, speculation is running amok about teams that could take their places. 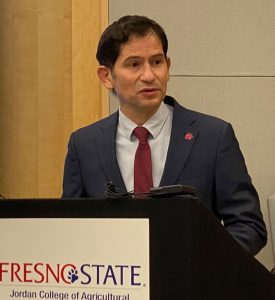 The timing of the move comes as the conference starts negotiating a new media rights package to take effect in 2024.

Jiménez-Sandoval was unsure of specific requirements to join the Pac-12, but expects there are some relating to academics and facilities.

There is further speculation that six more teams may leave the Pac-12, including Oregon, Washington, Arizona, Arizona State, Colorado and Utah. CBS Sports said the Big 12 could be a destination.

ESPN reports that each school received $19.8 million in media rights in 2021. That figure could drop when the two southern California schools leave.

Still, being in the conference — even if it includes only the likes of Cal or Stanford — is something Jiménez-Sandoval would look forward to.

“It would be huge. It’s not just about Fresno State, really. It’s about the region as well. It’s really about the region that for the most part is again, it is the future of California. And I truly believe that,” he said.