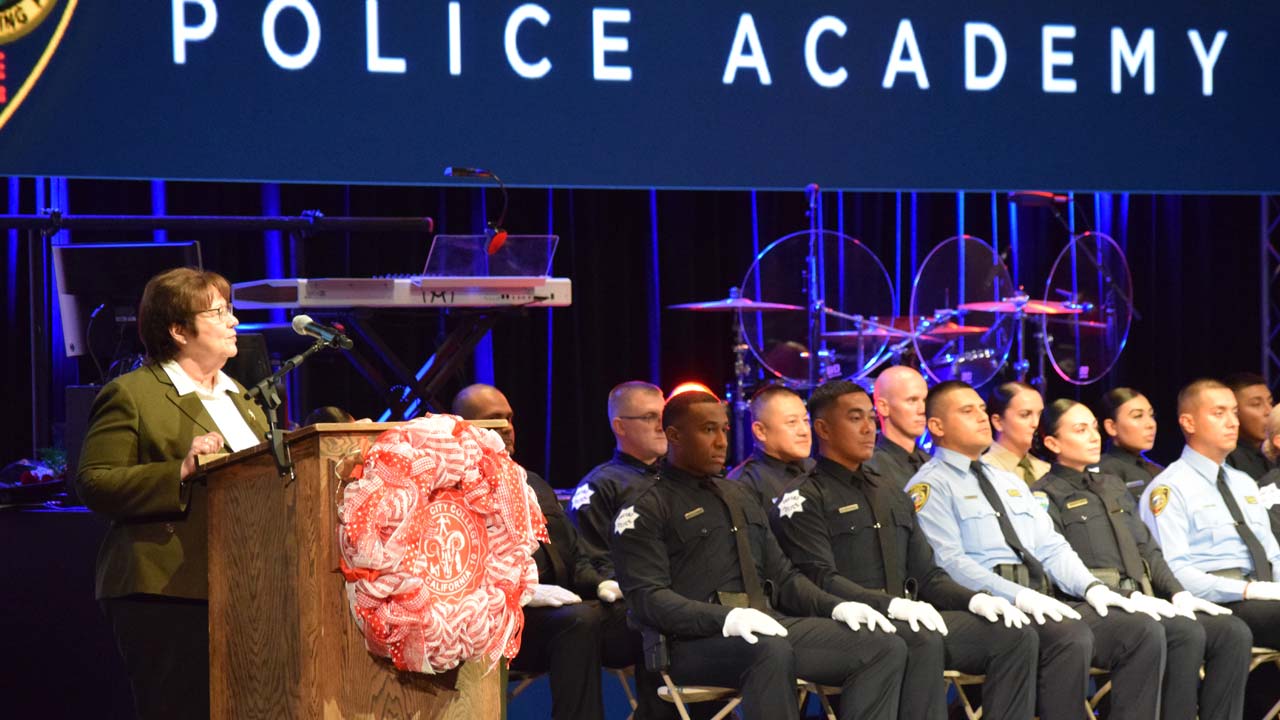 Mims, who will retire at the end of this year after 42 years in law enforcement, graduated as a member of the Police Academy Class No. 14 in 1980.

A lot of classes have graduated since then. The latest is Class No. 167, which began their training on Jan. 10 and which graduated Friday.

Mims told them they would be judged by a public that uses “using CSI as a measuring stick,” and she advised them to remember the lessons learned during their training and also to use their common sense and their compassion in their roles as sworn law officers.

She was surprised after her keynote speech with a presentation of a framed poster containing the photos of each member of Class No. 167 and also a bobblehead of herself as a younger officer with her K-9 partner. 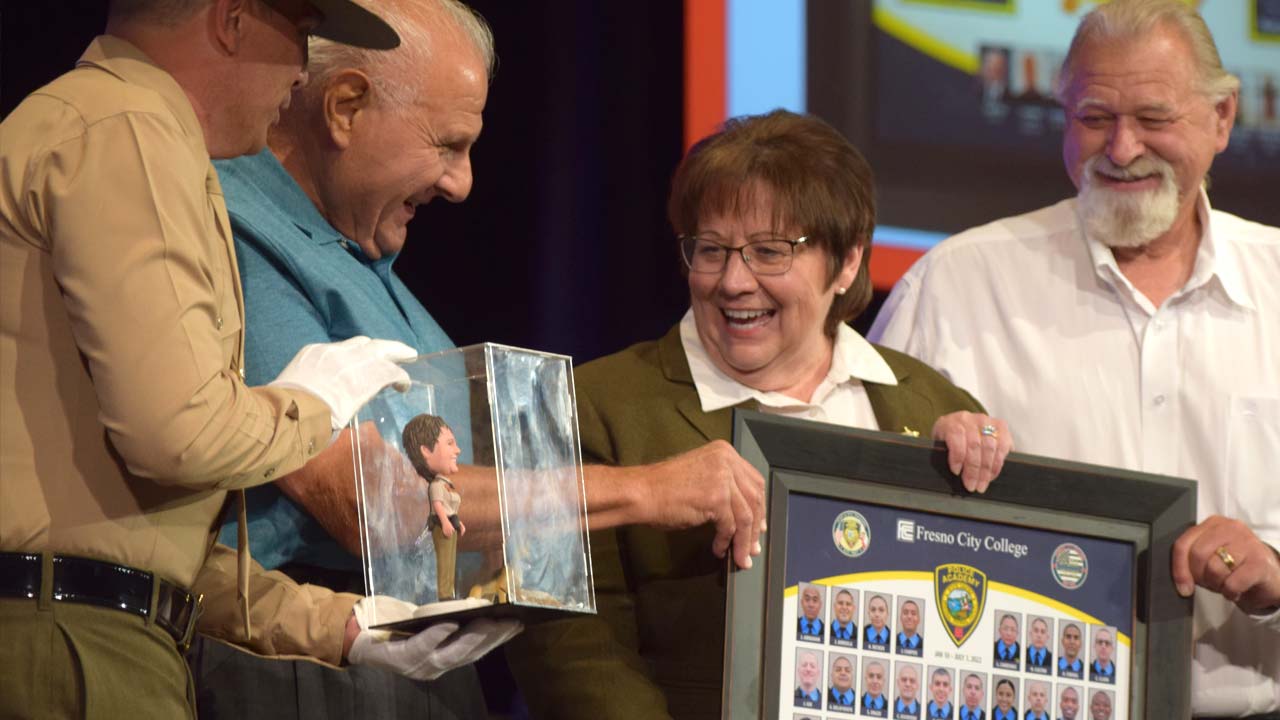 Fresno County Sheriff Margaret Mims is presented with a bobblehead in her likeness and other gifts at a Fresno City College Police Academy graduation on Friday. (GV Wire/Nancy Price)

Class No. 166, the preceding class, was on hand in February for the groundbreaking of the long-awaited First Responders Center southeast of Fresno at Willow and North avenues. Class No. 167 will be one of the final classes trained in aging buildings on the Fresno City College campus. The new center, which also will provide training spaces for firefighters and other first responders, is scheduled to be completed by late summer or early fall 2023.

Two local teens have been selected for a student leaders program and got eight-week paid internships with the Boys & Girls Clubs of Fresno County.

Pratham Hombal, who graduated in June from Buchanan High School, and Akhil Vallabh, who will be a senior at Clovis North this fall, are members of the 2022 Fresno Bank of America Student Leaders Program, which was established to help young people develop job experience while serving their communities.

Pratham graduated first in his class, was the student body president in his senior year, was a member of the National Honor Society, and expanded the Science Fair team during the pandemic from an average of five or six to 30. He established a nonprofit to fight climate change, interned at the NASA Ames Research Center’s GeneLab, and is a National Youth Advisory Council Member for the United Nations Ocean Decade program.

Akhil’s resume also is impressive: He ranked near the top of his junior class, place well in the Science Olympiad, has been a member of the Speech and Debate Team, founded his school’s Alzheimer’s Association Club, is a third-degree black belt in Taekwondo, and at age 14 became the youngest-ever paid instructor in his Taekwondo academy.

“Bank of America is steadfast in our commitment to supporting teens and young adults by connecting them to jobs, community engagement opportunities and leadership development,” Mark Riley, president of Bank of America Fresno, said in a news release. “These students are the future of the Fresno region, which is why programs like Student Leaders are one way we can provide paid opportunities for them to gain positive employment experience while developing a diverse pipeline of talent as they enter our local workforce.” 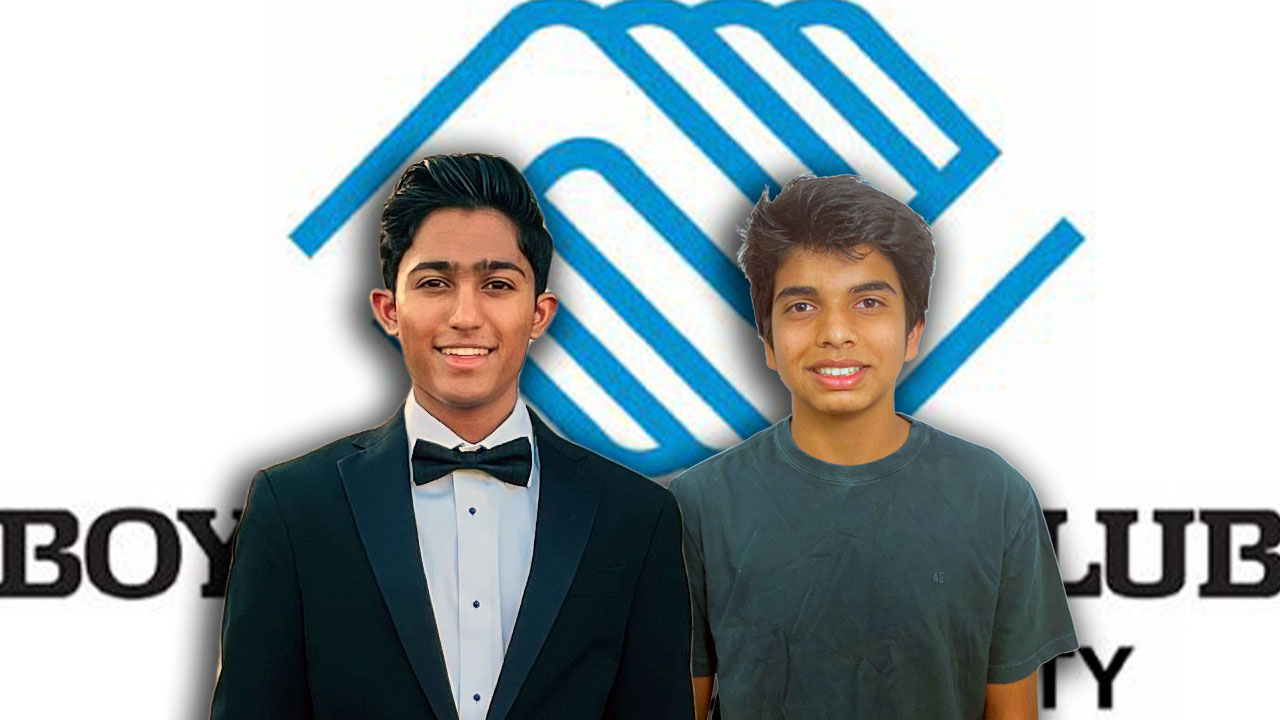 Twelve students from the Kern County towns of Wasco and Shafter got a big boost in paying for college when they were recently awarded scholarships of up to $30,000 by the Wonderful Community Scholarship Program.

The program, created and funded by Wonderful Company co-owners Lynda and Stewart Resnick, helps first-generation college students cover the costs of tuition, fees, books, and other college costs. To date, the program has provided more than 2,300 scholarships valued in excess of $25 million.

It was initially established 28 years ago to provide scholarships for the children of Wonderful Company employees but has been expanded to include Wonderful College Prep Academy graduates, Wonderful Agriculture Career Prep students, and now the Shafter and Wasco high schoolers.