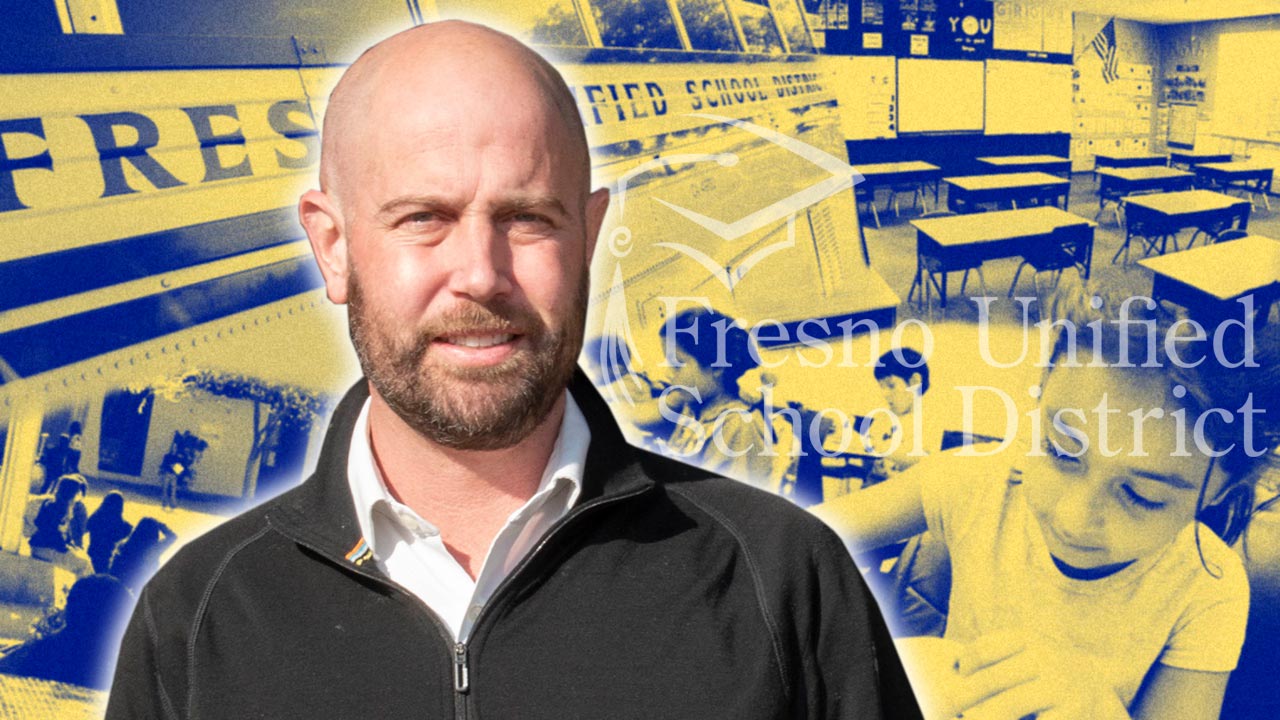 The updated vote count released by the Fresno County Elections Office after 8:49 p.m. Tuesday showed Levine, a community organizer and Fresno State instructor, in the lead with 56%, followed by retired parole administrator Daniel Renteria with 21%, retired teacher Russ Allen with 12%, and retired firefighter Andrew Fabela with 11%.

The winner will take the Area 5 seat on the Fresno Unified School Board that has been vacant since the death last July of longtime trustee Carol Mills. Mills, who was reelected in November 2020, lost her battle with Lou Gehrig’s Disease eight months later.

Levine told GV Wire he was feeling “pretty hopeful,” but he and his supporters were holding off on any celebration until after more results from Tuesday’s in-person and drop-box voting are posted.

He said he had heard anecdotally that a lot of people said they planned to vote Tuesday, and voters were seen at Fresno High, one of the Area 5 vote centers.

“I hope for democracy’s sake a lot of people voted today, and I hope they voted in favor of me, too,” Levine said.

Turnout for special elections are characteristically low, and this one was no exception. Of the 26,418 voters in the Fresno High Region, 3,272 — about 11% — had turned in ballots by Monday afternoon.

Ballots postmarked Tuesday have until April 19 to be counted. After the Clerk’s Office certifies the election results, the winner will take his seat on the School Board at the next regular trustees meeting.

If Levine maintains his vote lead, he will be elected by a majority of the votes cast. This election only required a plurality win, not a majority.

Kus called Levine’s vote lead “impressive,” given that he was one of four candidates in the race.

“I haven’t seen that in a multi-candidate race in years. That’s interesting to see,” Kus said.

The vote totals will change in coming days. The Clerk’s Office reported that 350 vote by mail ballots and five conditional voter registration/provisional ballots remain to be processed. The next vote update will be on Friday before 5 p.m.

Levine was the frontrunner in campaign contributions. According to the latest filing on Monday, Levine’s campaign donations totaled $70,224, including $10,000 from the Fresno Teachers Association PAC for Education and $5,670 from the pro-labor Valley Forward Action Fund.

Through March 31, Renteria’s campaign reported $28,472 in contributions, including $8,000 in loans. Granville Homes contributed $5,000 in cash and $3,923 in a nonmonetary contribution for a billboard. GV Wire publisher Darius Assemi is president and CEO of Granville.

Fabela’s campaign received $2,500 from a single donor, “Fix Fresno Unified School District” in the San Diego County town of Imperial Beach, to pay for signs that were loaded onto the bed of an antique pickup and parked at various locations in the Fresno High Region by Slatic. Allen’s campaign was self-financed and he did not report expenditures.

Related Topics:FeaturedFresno Unified School Board
Up Next