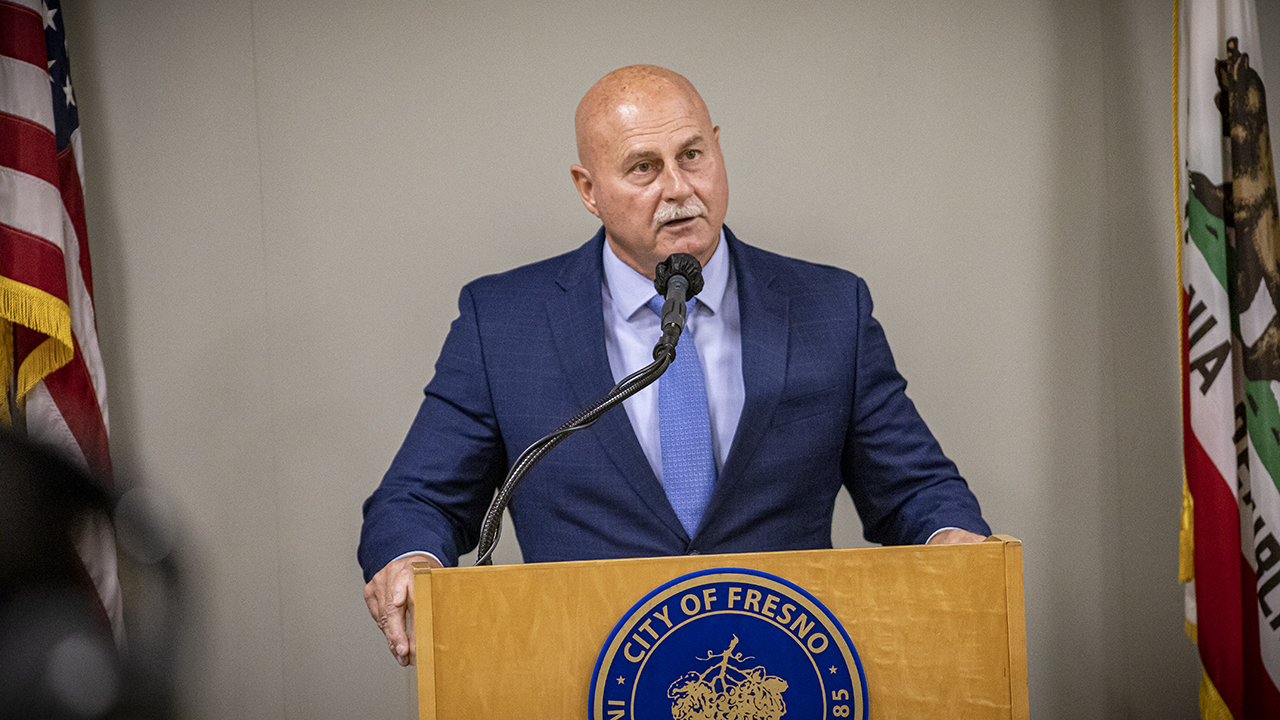 Fresno Mayor Jerry Dyer speaks to the media about the city's loss of $613,000 through a fraudulent invoicing scam. (GV Wire/Johnny Soto)
Share with friends

Fresno was one of several U.S. cities that fell victim to wire fraud and whose cases are being investigated by the FBI, Mayor Jerry Dyer told the media on Thursday.

The city lost more than $613,000 in a “phishing” scheme in which the city transferred large sums of money to external bank accounts based on fraudulent invoices. The payments were related to work being done at the Fresno Police Department’s southeast substation.

The fraud occurred in 2020 but was not revealed until The Fresno Bee detailed the scam in a story published this week.

“At no time was there any attempt to be deceptive, to deceive the public, to withhold information,” Dyer said. “This was simply being done to honor a request from the  Federal Bureau of Investigation, who was conducting a investigation into this matter.”

Dyer said the FBI made the request “for fear that it would hinder their investigation because they had good leads at that time. And it could also impact the ability to be able to recover any of the funds that were taken not only from the city of Fresno, but also other agencies that had been victimized.”

The payments went out via electronic transfer in January and March of 2020. While the invoices were doctored to appear they were coming from the contractor, Klassen Corporation, the bank account number listed on the document was not associated with the company.

The fraud, which happened during the administration of former Mayor Lee Brand, was not even disclosed to the City Council until Dyer became mayor.

Dyer said the information might have been released in “45 to 60 days,” following the completion of the FBI’s investigation. Initial reports indicated the suspects were from Africa. But Dyer, based on conversations with the FBI, said the suspect or suspects are domestic.

Dyer said he learned of the fraud a month before taking office in January 2021. He then informed the City Council in closed session at the Jan. 7, 2021 meeting.

“Closed session means that information shared in those meetings are not to be revealed publicly,” Dyer said.

Dyer blamed a city councilmember, whom he did not name, for potentially damaging the investigation by divulging the fraud.

“What I discovered was that a councilmember then provided that email (an email between City Councilman Miguel Arias, the city attorney and city manager) to a local reporter,” Dyer said. “It’s not for me to judge whether that was any type of violation, whether that was any attempt to compromise an investigation. But I do know that ultimately there is a potential for that to occur,” Dyer said.

The Fresno Bee’s reporting referenced an email between Arias and the two other city officials.

“I became very concerned that information had been leaked to the media regarding what we all knew to be an active, ongoing criminal investigation conducted by the FBI,” Dyer said. “I was also concerned the fact that this information going public could very likely — from  having the experience of law enforcement — could impact the chances of us or the federal agencies being able to arrest the suspects responsible for this crime.” Dyer was Fresno’s police chief before being elected mayor.

He also expressed concern that trust between federal agencies and the city could be damaged.

Dyer said the lead agent from the FBI told him last night he was “extremely disappointed” the information got out.

The incident, Dyer said, will change how he communicates with the City Council.

“I am going to be much more cautious in terms of the information that I share that I know to be confidential, in certain settings that I believe are confidential, which would include a closed session,” Dyer said.

Arias Said Information Was Not Confidential

Arias praised Dyer for initially disclosing the fraud to the council, but disputed that its later disclosure was harmful.

“I think it’s fair for us to meet our responsibility with taxpayers that when their taxpayer money goes missing in the amount of $617,000, that we’re honest, said Arias. (Dyer pegged the amount at $613,000.) “There’s no amount of detail that was released that would compromise the investigation. It was an acknowledgement that we were victims of a foreign financial scheme,” Arias said.

Arias said information about the fraud was also discussed outside of closed session.

Arias said keeping the public in the dark for 15 months was long enough.

“I’ve been patient. I’ve waited for three city managers (and) two mayors, to notify the council and the public of the status of the case and to acknowledge the public of the huge amount of taxpayer loss. I think three three city managers and two mayors and two and a half years of significant patience to acknowledge a basic fact that we lost $600,000 of public funds and we are yet to retrieve it back,” Arias said.

Contractor Threatened to Walk Out

Dyer explained the fraud was discovered in April 2020 when Klassen Corporation threatened to walk off the job because they had not been paid.

An FBI field office on the East Coast — Dyer would not specify which office — informed Fresno officials that they were looking at several other cities with similar circumstances.

Dyer said he was “embarrassed” that Fresno was the only city that leaked information and possibly compromised an investigation.

But news organizations have reported on similar incidents in two Florida cities in 2019, and in Erie County, New York in 2021. And a publication focused on municipal issues reported on “phishing” attacks against the city of Houston and other local governments in 2021.

Other cities have upfront about incidents of cybercrimes against them. In 2019, the city of Elk Grove distributed a news release confirming that it was a victim of fraud, but did not provide specifics.

The FBI told GV Wire it is policy not to confirm or deny investigations.

Dyer said the FBI cleared him to say that suspects have been identified, but there have been no arrests or indictments yet.

Unclear How Construction Funds were Made Up

Dyer said the fraud loss was accounted for in the city’s annual financial report. But Arias said the information was insufficient.

Dyer was unsure how funds were re-appropriated to make up for the stolen money. Normally, the City Council must vote on amounts that large.

In Dec. 10, 2020, the council approved $500,000 for “construction close out costs” to be paid to Klassen Corporation. The staff report indicated the money was because of lost time from the COVID-19 pandemic.

Dyer said the city has taken precautionary steps to prevent fraud, including talking with the contractor on the phone to confirm information. The city has an insurance policy covering amounts up to $250,000 (with a $50,000 deductible), but Dyer said that option has not been pursued yet.

Dyer said he would hold city staff accountable, but did not specify how. “A personnel action did occur in this case,” he said.

Both Lima and Mozier are still heads of their respective departments. Hall has since retired and Schaad is now the city manager of Marysville, north of Sacramento.