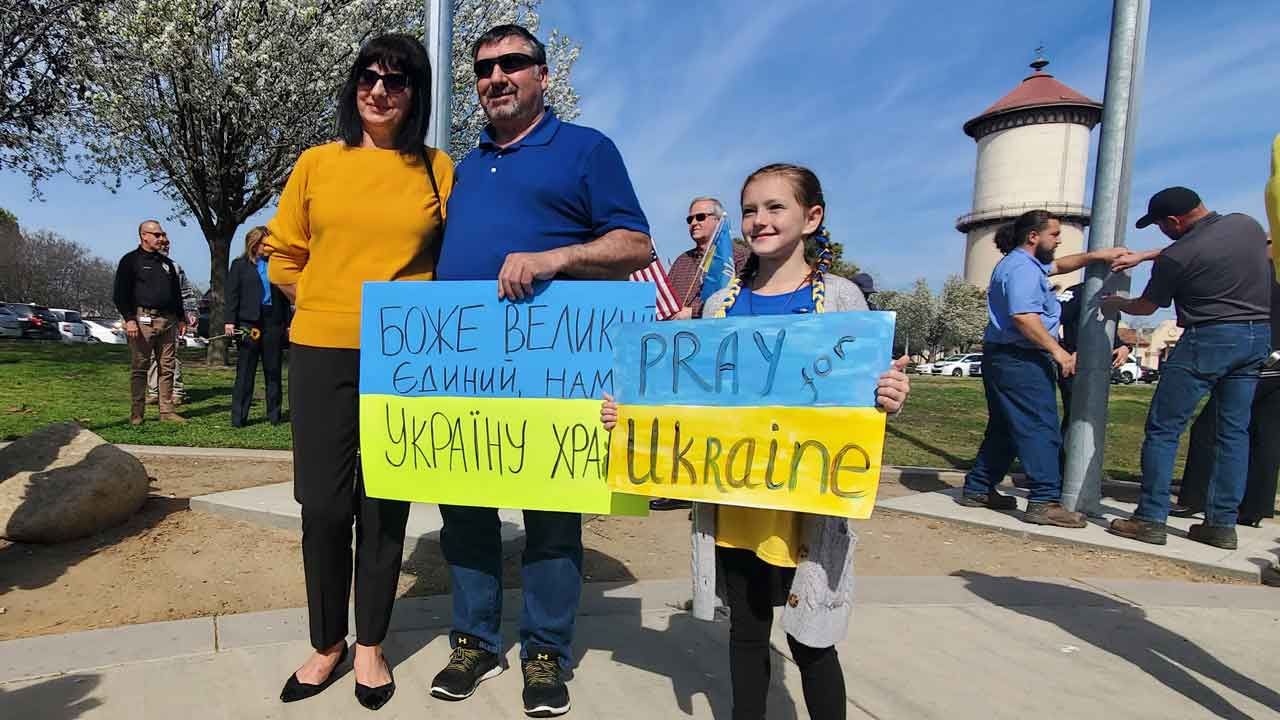 Tears flowed as city and county elected officials raised the flags of Ukraine and the United States in Fresno. A group of Ukrainians attending the event at downtown’s Eaton Plaza sang their country’s national anthem.

“(We) denounce this senseless war, a war that was completely unprovoked and unnecessary. A war that quite frankly, strikes at the heart of democracy. A war started by a man who resents the fact that a border country is a budding democracy,” Dyer said — referencing Russian President Vladimir Putin — as elected leaders and others carried signs and Ukrainian flags.

Dyer also welcomed any Ukrainian refugee fleeing the invasion to come to Fresno.

“Our doors are open to Ukrainian refugees who choose to come here. That is my commitment as the mayor of this city,” Dyer said at the ceremony.

‘I Don’t Know Any Other Ukraine, but Free Ukraine’

Mykhaylo Skitsak, who emigrated from Ukraine to the United States when he was 16, told his story to the approximately 100 people at the event.

“I was born in the free Ukraine. I don’t know any other Ukraine, but free Ukraine. So it breaks my heart and the heart of my fellow citizens, men that Ukraine is being bombarded and its freedom is being taken away,” Skitsak said.

He says he still has family living in western Ukraine and is in contact with them daily.

No City Investments in Russia

In response to a question from GV Wire, Dyer said he does not believe the city has any investments in Russian-owned companies.

“If we did, I could tell you I would eliminate them today. Just like other countries are. Just like Switzerland, who has always been neutral, has gotten involved now in frozen assets in the Swiss banks. I think that is a move that every every country in our world is is taking part of today and it is the right move,” Dyer said.