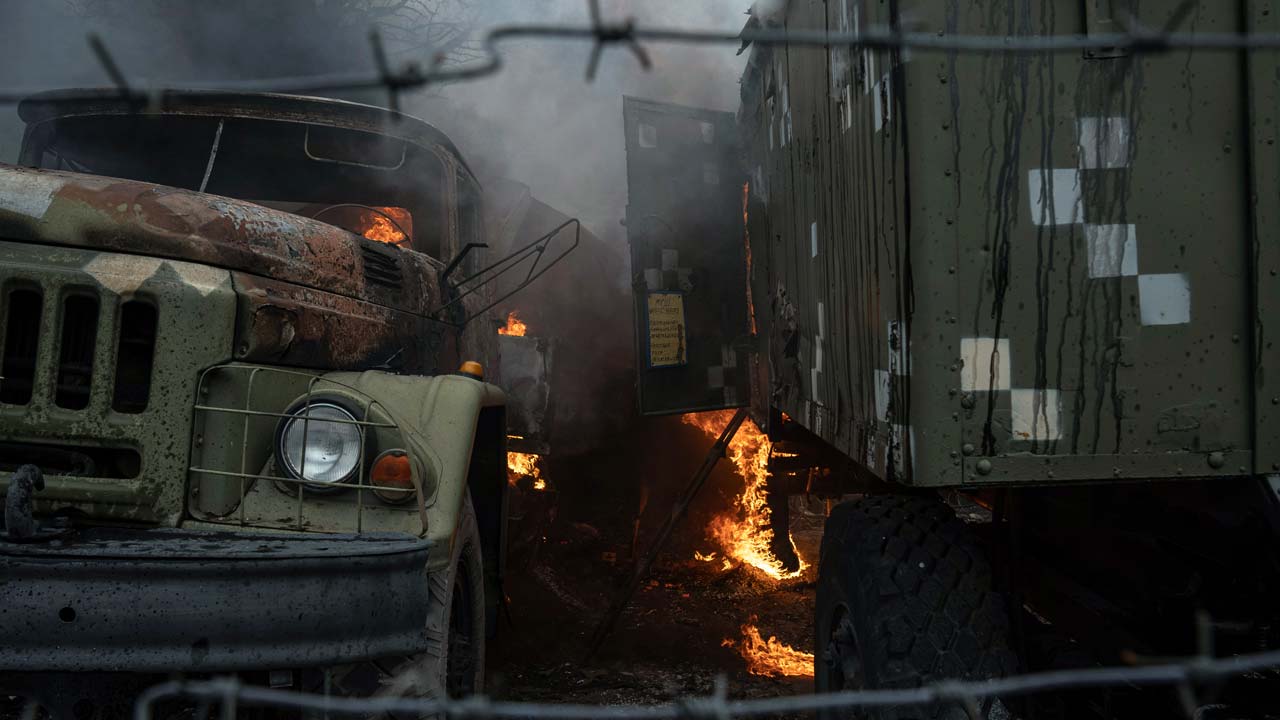 Ukrainian military track burns at an air defense base in the aftermath of an apparent Russian strike in Ukraine on Thursday. (AP Photo/Evgeniy Maloletka)
Share with friends

KYIV, Ukraine — Russia launched a wide-ranging attack on Ukraine on Thursday, hitting cities and bases with airstrikes or shelling, as civilians piled into trains and cars to flee. Ukraine’s government said Russian tanks and troops rolled across the border in a “full-scale war” that could rewrite the geopolitical order and whose fallout already reverberated around the world.

In unleashing Moscow’s most aggressive action since the Soviet invasion of Afghanistan in 1979, President Vladimir Putin deflected global condemnation and cascading new sanctions — and chillingly referred to his country’s nuclear arsenal. He threatened any foreign country attempting to interfere with “consequences you have never seen.”

Ukraine’s president said Russian forces were trying to seize the Chernobyl nuclear plant, site of the world’s worst nuclear disaster, and Ukrainian forces were battling other troops just miles from Kyiv for control of a strategic airport. Large explosions were heard in the capital there and in other cities, and people massed in train stations and took to roads, as the government said the former Soviet republic was seeing a long-anticipated invasion from the east, north, and south.

Peace in Europe Is Shattered

The chief of the NATO alliance said the “brutal act of war” shattered peace in Europe, joining a chorus of world leaders who decried the attack, which could cause massive casualties, topple Ukraine’s democratically elected government and upend the post-Cold War security order. The conflict was already shaking global financial markets: Stocks plunged and oil prices soared amid concerns that heating bills and food prices would skyrocket.

Condemnation rained down not only from the U.S. and Europe, but from South Korea, Australia, and beyond — and many governments readied new sanctions. Even friendly leaders like Hungary’s Viktor Orban sought to distance themselves from Putin. 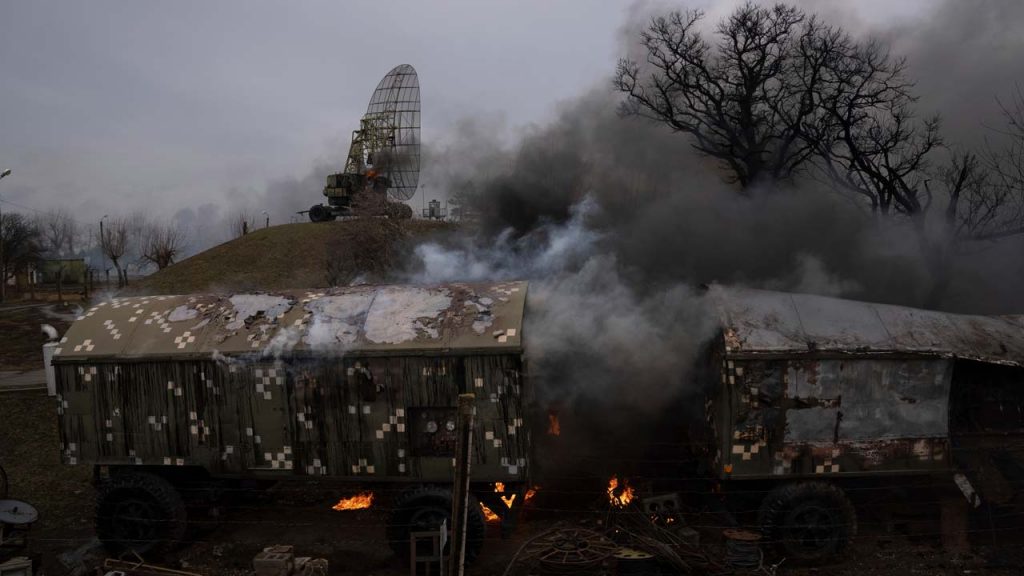 Smoke rise from an air defence base in the aftermath of an apparent Russian strike in Mariupol, Ukraine, Thursday, Feb. 24, 2022. Russian troops have launched their anticipated attack on Ukraine. Big explosions were heard before dawn in Kyiv, Kharkiv and Odesa as world leaders decried the start of Russian invasion that could cause massive casualties and topple Ukraine’s democratically elected government. (AP Photo/Evgeniy Maloletka)

“As of today, our countries are on different sides of world history,” Zelenskyy tweeted. “Russia has embarked on a path of evil, but Ukraine is defending itself and won’t give up its freedom.”

His adviser Mykhailo Podolyak said: “A full-scale war in Europe has begun. … Russia is not only attacking Ukraine, but the rules of normal life in the modern world.”

Related Story: What’s at Stake in Ukraine Is the Direction of Human History

While some nervous Europeans speculated about a possible new world war, the U.S. and its NATO partners have so far shown no indication they would join in a war against Russia. They instead mobilized troops and equipment around Ukraine’s western flank — as Ukraine pleaded for defense assistance and help protecting its airspace.

In Washington, President Joe Biden convened a meeting of the National Security Council on Thursday to discuss Ukraine as the U.S. prepares new sanctions. Biden administration officials have signaled that two of the measures they were considering most strongly include hitting Russia’s biggest banks and slapping on new export controls meant to starve Russia’s industries and military of U.S. semiconductors and other high-tech components.

In a worrying development, Zelenskyy said Russian forces were trying to seize the Chernobyl plant, and a Ukrainian official said Russian shelling hit a radioactive waste repository and an increase in radiation levels was reported. The official spoke on condition of anonymity to discuss the sensitive matter.

Other governments did not immediately corroborate or confirm the claims.

Ukraine Is About the Size of Texas

After weeks of denying plans to invade, Putin launched the operation on a country the size of Texas that has increasingly tilted toward the democratic West and away from Moscow’s sway. The autocratic leader made clear earlier this week that he sees no reason for Ukraine to exist, raising fears of possible broader conflict in the vast space that the Soviet Union once ruled. Putin denied plans to occupy Ukraine, but his ultimate goals remain hazy.

Ukrainians who had long braced for the prospect of an assault were urged to shelter in place and not to panic despite the dire warnings.

“We are facing a war and horror. What could be worse?” 64-year-old Liudmila Gireyeva said in Kyiv. She planned to flee the city and try to eventually get to Poland to join her daughter. Putin “will be damned by history, and Ukrainians are damning him.”

With social media amplifying a torrent of military claims and counter-claims, it was difficult to determine exactly what was happening on the ground.

Ukraine’s military chief Valerii Zaluzhnyi said his troops were fighting Russian forces just 4 miles from the capital — in Hostomel, which is home to the Antonov aircraft maker and has a runway that is long enough to handle even the biggest cargo planes. Russian officials said separatist forces backed by Russia in the east have taken a new strip of territory from Ukrainian forces, but have not acknowledged ground troops elsewhere in the country.

Associated Press reporters saw or confirmed explosions in the capital, in Mariupol on the Azov Sea, Kharkiv in the east and beyond. AP confirmed video showing Russian military vehicles crossing into Ukrainian-held territory in the north from Belarus and from Russian-annexed Crimea in the south.

Russian and Ukrainian authorities made competing claims about damage they had inflicted. Russia’s Defense Ministry said it had destroyed scores of Ukrainian air bases, military facilities and drones, and confirmed the loss of a Su-25 attack jet, blaming it on “pilot error.” It said it was not targeting cities, but using precision weapons and claimed that “there is no threat to civilian population.”

Poland’s military increased its readiness level, and Lithuania and Moldova moved toward doing the same. Border crossings increased from Ukraine to Poland, which has prepared centers for refugees.

Putin justified his actions in an overnight televised address, asserting that the attack was needed to protect civilians in eastern Ukraine — a false claim the U.S. had predicted he would make as a pretext for an invasion. He accused the U.S. and its allies of ignoring Russia’s demands to prevent Ukraine from joining NATO and for security guarantees.

The consequences of the conflict and resulting sanctions on Russia reverberated throughout the world.

World stock markets plunged and oil prices on both sides of the Atlantic surged toward or above $100 per barrel, on unease about possible disruption of Russian supplies. The ruble sank.

Anticipating international condemnation and countermeasures, Putin issued a stark warning to other countries not to meddle.

In a reminder of Russia’s nuclear power, he warned that “no one should have any doubts that a direct attack on our country will lead to the destruction and horrible consequences for any potential aggressor.”

Among Putin’s pledges was to “denazify” Ukraine. World War II looms large in Russia, after the Soviet Union suffered more deaths than any country while fighting Adolf Hitler’s forces.

‘The Worst Sunrise in My Life’: Ukrainians Wake to Attack